Summertime, and the living is…evil. The Twins Of Evil Tour Bring’s Rob Zombie And Marilyn Manson Together Again 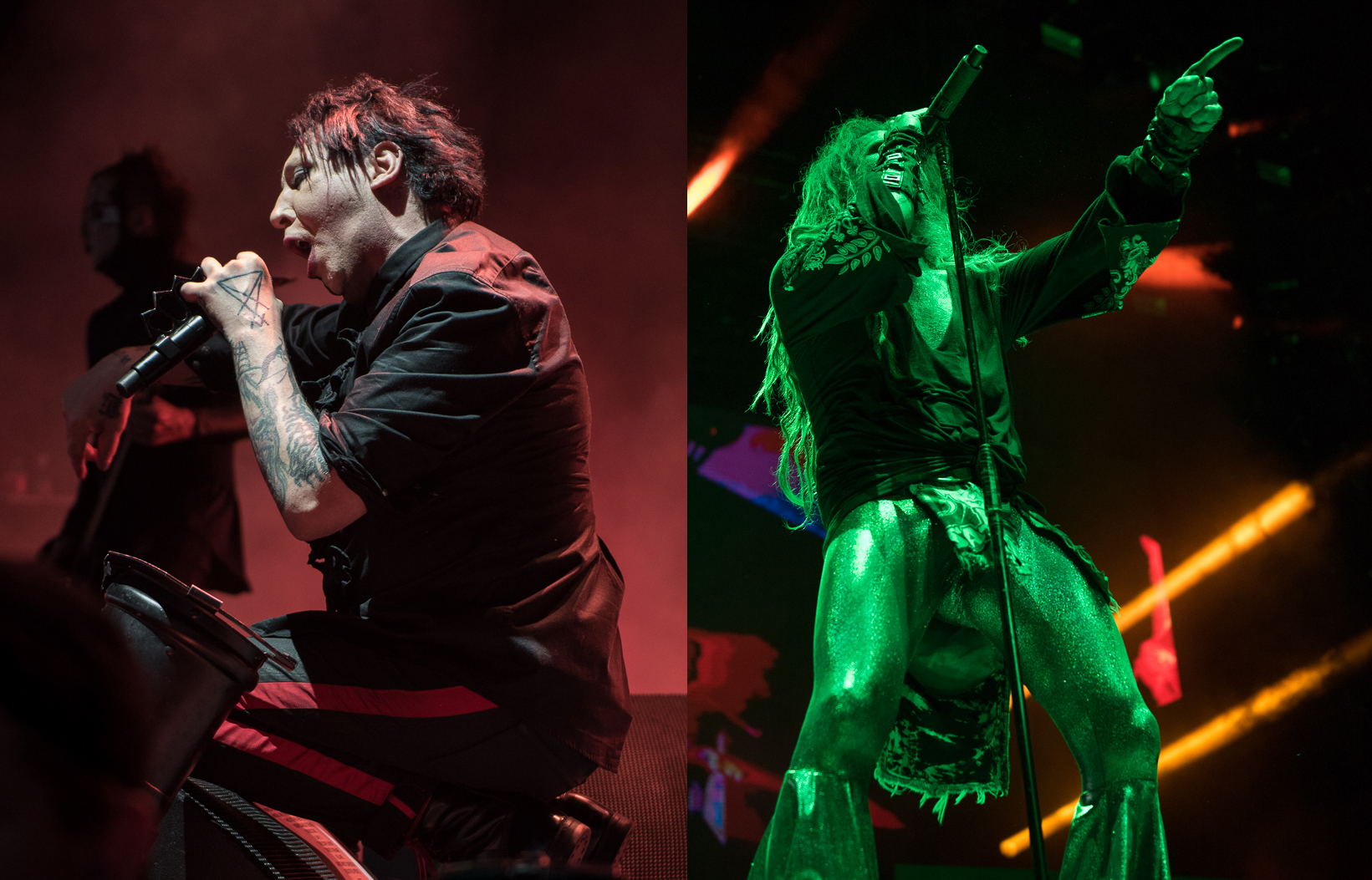 At least, it was on Sunday night as this summer’s must-see rock star pairing of Rob Zombie and Marilyn Manson – the “Twins of Evil” – landed in Chicago.

Opener Deadly Apples brought some hooky, industrial-influenced goth rock as the sun went down, and by the time dusk arrived, the stage was set for Manson. In what’s likely to be the last leg of the tour in support of 2017’s Heaven Upside Down, the set was heavy on the hits as a good-natured Manson joked with the crowd, bringing a small assemblage of women onstage during “Kill4Me” and donning a black-feathered shawl during “The Dope Show.” A glowing, inverted cross-adorned dais featured a robed Manson during “Say10” (such an anthemic hook was made for big shows like this), and the familiar rally banners and minister’s pulpit returned for “Antichrist Superstar” and “The Beautiful People,” harkening back over twenty years to that seminal album’s release. Manson’s stage show is a more a understated affair these days – largely gone are the over-the-top costume changes and effects in favor of a more stripped down, monochromatic look – but the songs are no less powerful for it, and if anything, the set was shorter than one would have hoped.

If Manson made his point with stark, largely black-and-white imagery, then the jack-of-all-horrors Rob Zombie was the opposite of that coin. Taking the stage with deep cut “Lords of Salem,” Zombie’s show is a horror fan’s wet dream – a psycho, schizophrenic mash of horror movies, monsters of all shapes and sizes, seedy underbellies, and dancing robots. At 53, Zombie’s energy is beyond that of most performers half his age – he’s a dancing, thrashing Tasmanian devil that keeps the crowd ramped up to a frenzy for every second he’s on the stage, and his well-oiled machine of a band (drummer Ginger Fish, bassist Piggy D, and guitarist extraordinaire John 5, whose array of costumes and creepy on-stage masks is seemingly limitless from tour to tour) is turn-on-a-dime exciting. There was an unexpected reunion as Manson joined Zombie onstage for a performance of their “Helter Skelter” cover, released last week to streaming services; it was impossible not to feel a bit of nostalgia seeing Manson flanked by John 5 and Ginger Fish again, and the performance was a blaster – let’s hope that Marilyn and Rob decide to do this duet thing again sooner than later.

The rest of the setlist drew nicely from all eras of Zombie’s solo career and the biggest White Zombie hits for good measure, and it featured an unexpected surprise at the encore break – the first teaser trailer for Three From Hell, the final part of the Firefly Family trilogy that began with House of 1,000 Corpses and The Devil’s Rejects; thankfully, Zombie’s role as the renaissance man of all things creepy seems poised to continue indefinitely. Forget everyone else out there who would lay claim to the title – Zombie is the undisputed king of theatrical shock rock at this point, and the 17,000 faithful at Tinley Park would likely agree.

For more on the Twins of Evil tour, click here

For Marilyn Manson photos from the show, click here

For Rob Zombie photos from the show, click here

Angel With the Scabbed Wings

Well, Everybody’s Fucking in a U.F.O.

In the Age of the Consecrated Vampire, We All Get High

Rob Zombie @ Hollywood Casino Amphitheatre Is Lolla-paloozed Out In Chicago? A Top Ten List Of Reasons Why Lollapalooza May Be Slipping From Its Own Top Bill