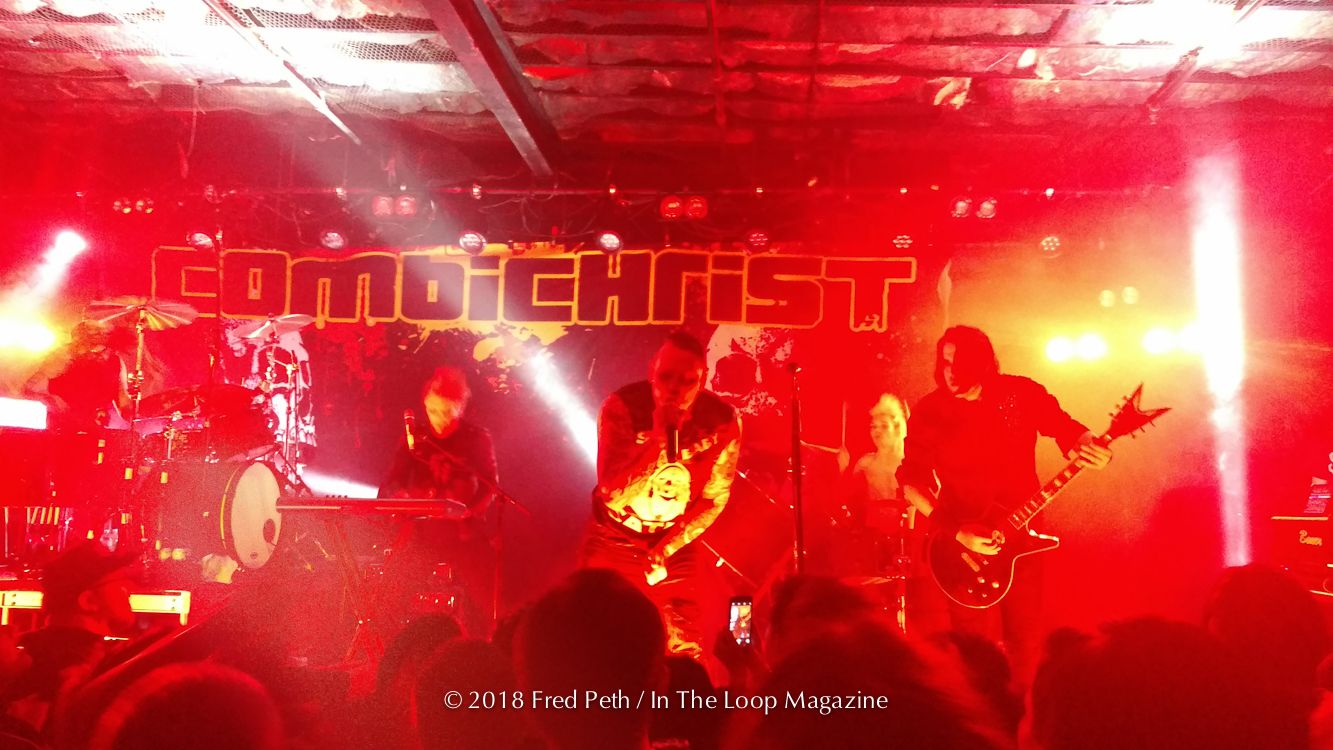 The first time I saw Combichrist live was in Chicago when they opened up for Lords of Acid on Halloween night last year. I was blown away at their stage presence and the drummer’s antics. This time they are headlining their Everybody Still Hates You tour. The electro-industrial group formed back in 2003 by Andy Plegua, the lead singer. Over the years the band has seen many members come and go and are now based in Atlanta, Georgia. The band currently consists of Andy Plegua (lead singer), Joe Letz (drummer), Eric13 (guitarist), Nick Rossi (second percussionist) and Elliott Berlin (keyboardist).

As the intermission music was turned off and the lights went down in the venue, each of the band members walked onto the stage one by one and took their place. Andy took command of the crowd when he walked onto the stage and the band opened up with “All Pain Is Gone”. The crowd instantly jumped around and sang in unison. “Blut Royale” saw Joe and Nick beating their equipment together getting the crowd’s energy higher. They responded with screams and their fists outstretched in the air.

Joe Letz, not taking himself too seriously, wore a black dress with fake breasts, white face paint, makeup, a black wig and a mouthpiece that keeps his mouth outstretched throughout the show. He banged on his drums with precession, pushing them and his cymbals over and throwing his drumsticks in the air. He gave his assistant plenty to do chasing them around and setting the equipment back up. His assistant is unequivocally the sixth member of the band.

Andy made sure the whole crowd was being entertained as he walked from side to side of the stage. “Electrohead” was a high-energy song that the crowd loved to sing with as Andy jumped and pointed to individuals in the crowd. Some of the crowd got a mosh pit going to “Throat Full Of Glass” one of their more industrial songs. It is aggressive and rhythmic at the same time.

Getting back to the electric sound of the show, “Get Your Body Beat” has a strong beat to it and a memorable chorus. Once again as the band was jumping up and down on the stage, this got the crowd to jump with them. From the smiles on the band it showed how much fun they were having with the crowd. Elliot would position himself with one foot on the drum riser and the other on his keyboard. Occasionally lifting his keyboard above his head to the cheers of the crowd and Nick stage dove to the cheers of the crowd being crowd surfer around for a few moments before being pulled back on stage.

One of my favorite songs “Never Surrender” is what they opened their encore set to, which comes from the Making Monsters album. Side note: the American magician and illusionist, Dan Sperry, uses the song in one of his acts. Making sure the crowd has not gone to sleep or decided to leave early, Combichrist kicked it up with another crowd favorite “Maggots At The Party”. The entire crowd was singing along with the chorus of the song. As the band loves to play music that is in your face they ended the night with “What The Fuck Is Wrong With You?” which saw Nick standing on top of his drums while he played them. Much of the crowd was sweaty and tired after the show from the pushing and moshing that Chicago is known for. Combichrist has plenty of dates left on this tour and I would guess they will be back playing Chicago soon.