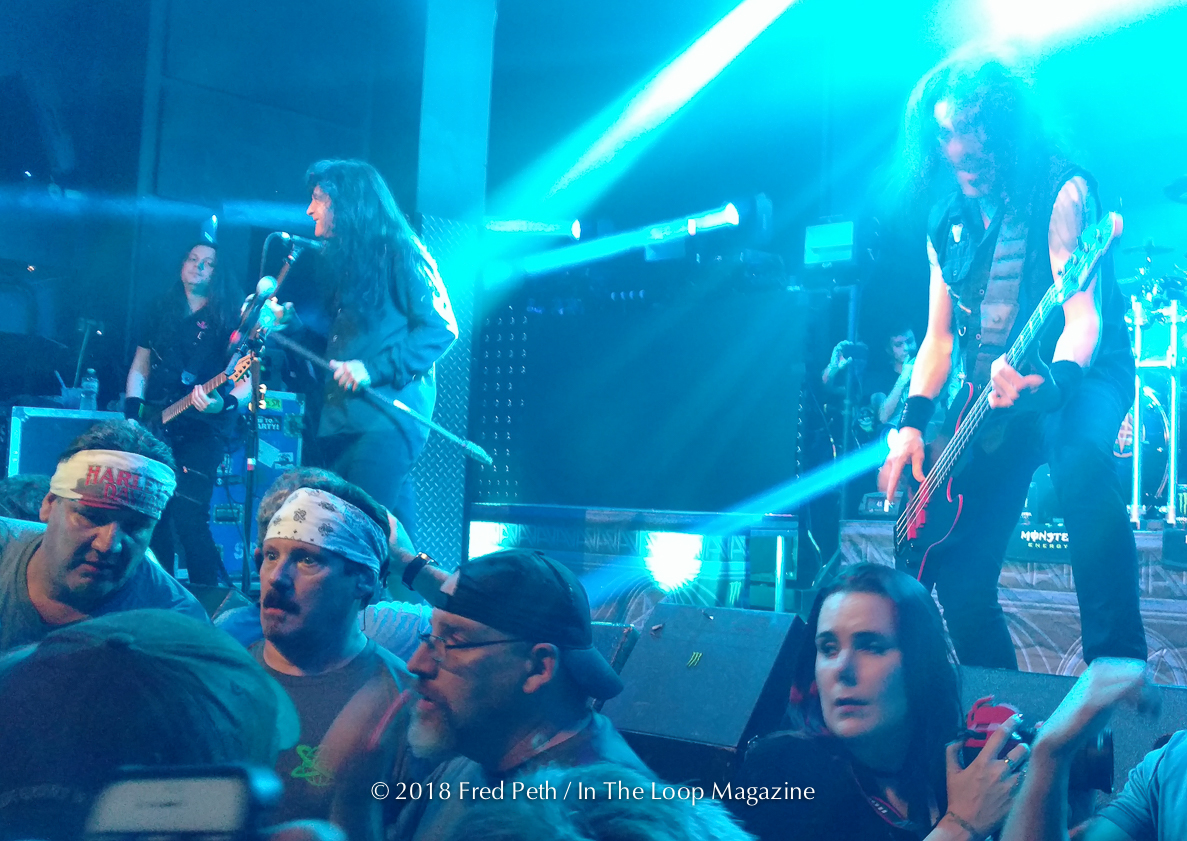 There was a madhouse on Cass St. when Anthrax took to the stage and gave it everything they got to the sold out crowd. Being one of the Big Four bands in the heavy metal scene, Anthrax gave us all a sneak preview before they come back to town with Slayer in a couple of months.

The crowd got louder and started singing along when Iron Maiden’s “Number Of The Beast” was played over the speakers throughout the venue. The lights went down and the appropriate “Can’t Turn You Loose” (The Blues Brothers Intro) followed. This was the first time the band played in Joliet, which hearing the intro to the Blues Brothers more fitting.

The stage was basked in red flashing lights with smoke billowing upwards to the ceiling as the band came onto the stage and quickly got everyone’s attention with the opening song “Among The Living”. As the band was jamming on stage, Joey Belladonna ran from side-to-side to get the crowd more hyped up. During the night, Joey interacted with the crowd throwing guitar picks and making sure the crowd from the front to the back and even in the balcony was having a great time. The flashing lights kept with Charlie Benante’s drum beats, as Scott Ian was thrashing at the front of the stage.

Increasing the intensity they jumped right into “Caught In A Mosh”. The crowd responded by getting a mosh pit started that spanned the width of the stage. Some of the crowd surfed towards Jonathan Donais and Frank Bello as they flipped their long hair, head banging and singing with the crowd.

Anthrax’s time on stage was filled with a bunch of great high intensity songs that spanned their 30-plus year album collection. Other than Scott Ian addressing the crowd every once in awhile, the band rocked their short 11-song setlist. For me, the band could have kept on playing for at least another hour covering more of their great songs. The night also featured “Fight ‘Em ‘Til You Can’t” from the album Worship Music and “Breathing Ligtning” from For All Kings, a couple newer songs.

Like the beginning of the night, Anthrax ended the night on a fast-paced high note. They made the best of what they had to deal with on the small stage and two pillars to circumvent during the night. Even though that was a small annoyance, the band showed what kept them going over all these years. The band sounded great from start to finish with the songs “Be All, End All”, their version of Trust’s song “Antisocial” and a fan’s favorite “Indians”.

I am sure the majority of this crowd will make the trip out to see Anthrax again in May. Not only because they are going to be opening up for Slayer, but also because Anthrax is much a fan of heavy metal music as the rest of us.

For more on Anthrax including current tour, click here