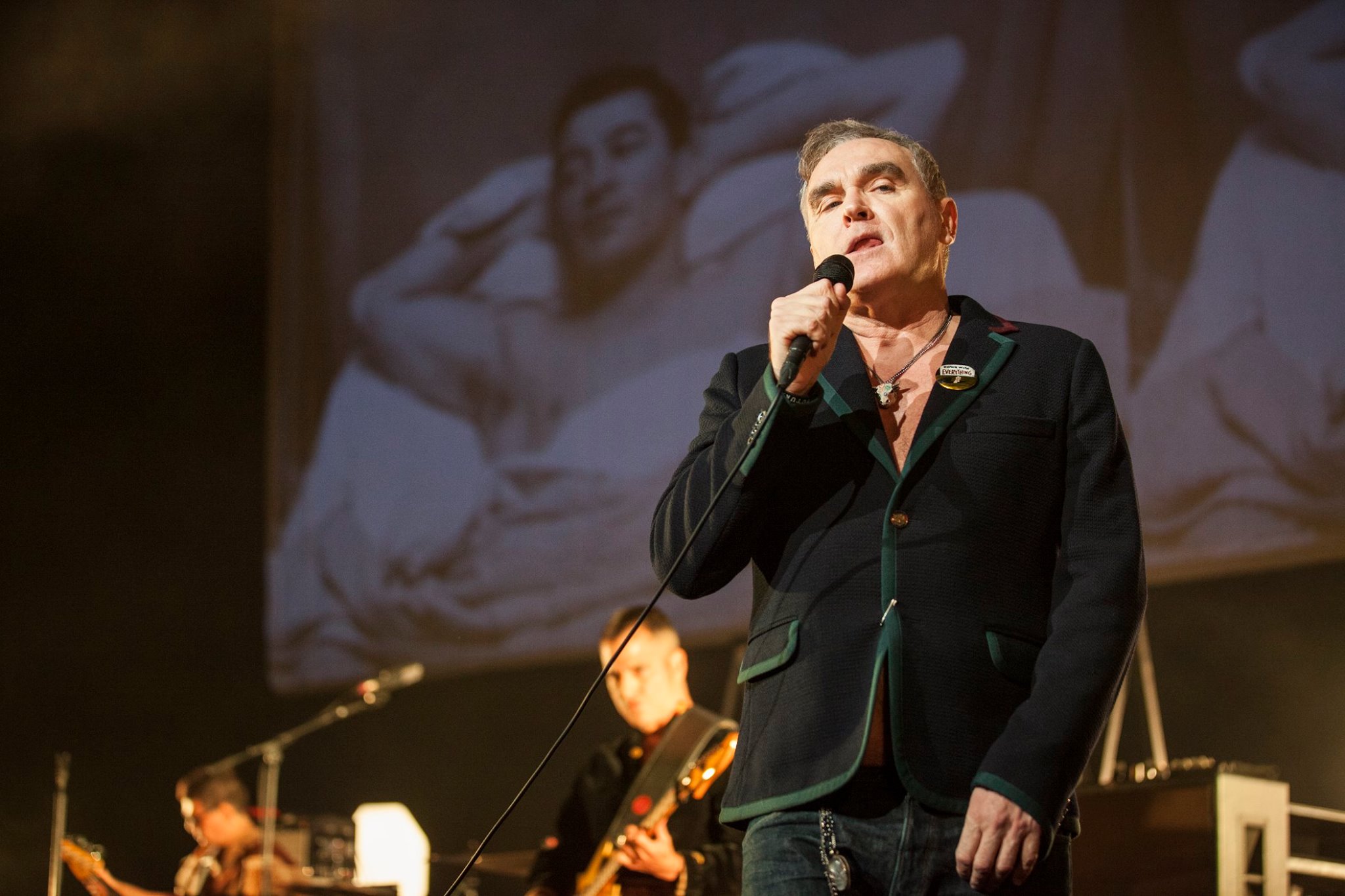 Some observations from Morrissey’s sold out performance from the Riviera Theatre in Chicago: Morrissey’s opening film footage of his heroes before hitting the stage never gets old. It starts off with live footage of The Ramones, then bounces to early 60s footage of British girl groups singing in an empty and moving coal train, then off to footage of early James Brown, to The New York Dolls, The Sex Pistols blasting through “God Save The Queen” on a barge floating down the Thames under Big Ben, then a campy and vampy cover of The Smiths “How Soon is Now” by Russian music duo t.A.T.u., plus some swinging 60s footage of the vocal quartet The Four Tops. If that isn’t enough, there’s early 80s footage of Philip Oakey from his synth pop band The Human League. There’s over a half hour of this, before Morrissey comes to the stage and starts to perform.

You can tell the crowd is grateful that the Moz has shown up: Outside of Riot Fest from a couple of years ago, and his performance from the Civic Opera House before that- it’s been fifty / fifty if he’d ever make it here to perform. But make no mistake: Chicago is a town that Morrissey love and embraces, not just because he has a brilliant and talented drummer in his band from Chicago- that being Matt Walker.

There’s something special about Morrissey and his large catalog of songs to cherry pick from that always makes it worth the gamble of seeing him perform live. And perform he did. His vocal were spot on, and his sense of managing the stage like a true crooner (Dean Martin style), was a delight to witness in person.

Unleashed from the start, Moz barnstormed through a cover of Elvis Presley’s “You’ll Be Gone”, into “I Wish You Lonely”, and then a brilliant interpretation of The Smiths classic “How Soon is Now”, ending with drummer Matt Walker relentlessly banging a giant gong behind his kit, and then hammering away on a gargantuan angled Floor Tom to end the song.

You sense early on that Morrissey has a lot to say- not just his pop virtues and painful lonely lyrics and crooning: but also on his defiant political stance and opinions on the state of the world we’re living in today, whether it be skewering Trump, Margaret Thatcher, British Royalty, or whatever. And good for Moz seeking answers to all of this insanity.  He insists on getting to the truth, maintaining the truth, and stating that “Truth always wins”.

Towards the end of one of his brand new songs “Jacky’s Only Happy When She’s up on the Stage”, a song that strikes at the core of the current state of affairs in the UK and Brexit in particular: Morrissey sang clearly and convincingly “Everybody’s running to the exit- Exit – EXIT” pointing furiously at all the exit signs in the Riviera Theatre, to his left, to his right, and at the back of the venue.

He didn’t let up on his opinions of the US political climate, updating his lyrics from the song “Glamorous Glue” from “We won’t vote Conservative”, to “We won’t vote Republican”. The Trump loathing was plain, direct and evident. Moz considers it toxic, and well, why not blow the whole thing up and start over, as he states clearly when saying “Each time you vote, you support the process”.

You clearly sense this in Morrissey’s new song “Spent the day in bed”, and offering this sentiment in his lyrics: “Stop watching the news, because the news contrives to frighten you, to make you feel small and alone, to make you feel that your mind isn’t your own”. And on it went, with digs here, diatribes there.

Feeling alone and sad and slightly miserable, with some added despair, with a touch of manic depression are hallmarks of Morrissey’s psyche in his lyric form; like it’s in his DNA. To have him sardonically and quizzically and humorously come to grips with his self loathing only fuels the fire for his devoted fan base to love and embrace him more.

For Morrissey and his devoted fans, loneliness is a warm and comforting hug embraced by the masses all feeling the same thing.
And it’s also a lot of fun and entertaining to see live, and to sing along with his pain, and with a nod and a wink.

SETLIST: Morrissey live in Chicago at The Riviera Theatre November 25, 2017

21: Shoplifters of the World Unite (The Smiths song)