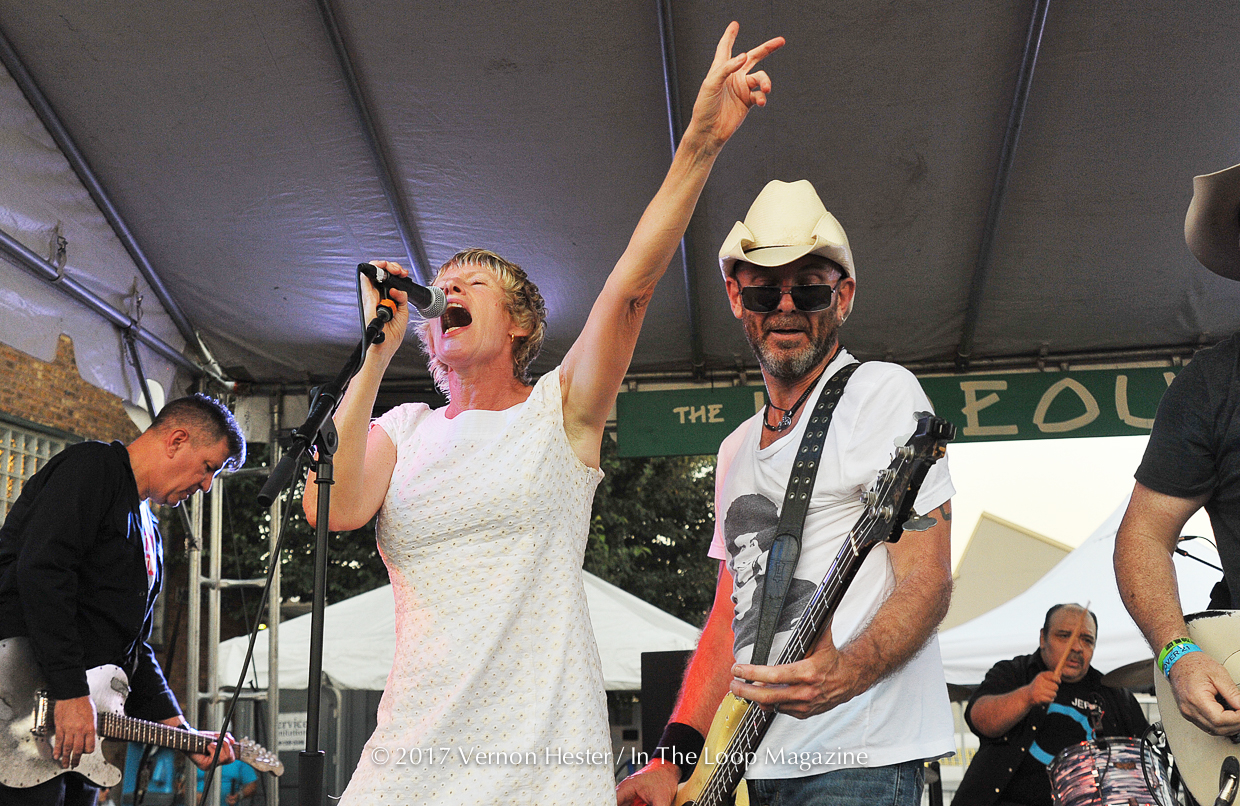 Summer of 2017 is officially over. The last monster sized hoo-ha known as Riot Fest and the beastly heat that  hit Chicago in the wake of Hurricane Irma are not true indicators of the passing of the season. The only sign post that matters is the resurrected Hideout Block Party which took place September 23 and 24 and managed to morph itself into an anti-festival.

Last year saw the festival return to celebrate its twentieth anniversary, while Hideout owners Tim and Katie Tuten and the Hinchsliff twins have found a way to re-purpose and re-shape it. This particular festival still feels personal and friendly, and can best be described as a rowdy neighborhood hoe down. Ironically, the “neighborhood” that The Hideout resides in is crammed with warehouses and truck parking lots, but the surroundings actually accentuate the event’s charm. After all, who needs Grant Park to throw a high quality shindig.

The term “high quality” is a telling one here since The Block Party by its small size is not about spectacle but has always been about the music. As Lollapalooza, Riot Fest, Pitchfork, and their kin get larger they feel less about the music and more about the size. And if the corporate nature has made them less friendly and personal, and more faceless and cold, the sense of community in the audience has dwindled. The one thing that festival goers at the larger festivals have in common is that they were all able to cough up oodles of hard cynical cold cash to gain entry. Amusingly enough, this year’s Block Party came with a “donate what you can” ticket price with all proceeds going toward Foundations of Music which directly supports music education in the cash strapped Chicago public school system. And if that were not enough the Tutens and a team of volunteers ran about everywhere greeting fest goers, schlepping ice to and fro, wiping up spills and doing whatever needed to be done to make the festival a success. The Hideout Block Party has become, without fanfare, what this city likes to think of itself as…”the city of big shoulders.

The first day blasted off as an acknowledgement of the 60th Anniversary of the Sputnik Launch. I can’t tell whether the Tutens and Hinchsliffs meant that as a focused jab at President Trump, being his ethically shady love for all things Russian but I had to admit it was a different idea. The first two performances were highly enjoyable though intentionally unfocused and spontaneous. The Vision Celestial Guitarkestra paid homage to the legendary Sun Ra and the mob of artists and musicians who camped out in front of the stage went at it with full force. With a cast of familiar faces in the mix (Michael Shanley, Travis and Michael P. of ONO, Annette D’Anna, Jose Bernal, Aadam Jacobs and too many to mention) the single 15 minute musical and spoken word ” selection” came off as a frantic interplanetary epic. Before 75 Dollar Bill popped up two members of the Illinois Humanities Festival led the audience in a cheery rehearsal to the upcoming “Crowd Out” event which will take place in Millennium Park on October 1.  Starting their set off the stage and in the crowd as a drum circle, Rick Brown’s “homemade orchestra” had the feel of a ragged, loud jug band and proceeded to redefine the term “jam band” with fury.

Then Tim Harris (on bass) and Tara Kay (guitar) led their band Antietam through a set featuring selections from the just released Intimations on Mortality. Being that the band has been together since 1984 their set seemed to be less about punk rock (which they were considered from their start) and more about the process of loss and growing older. The new “Sunshine” and “Right Between the Eyes” felt like music written by artists who are struggling to deal with the second part of being over fifty years  but with the addition of sax woman Sheryl Keegan their performance had an added kick.

The Condo Fucks kicked off their poppy set with an instrumental rip through Henry Mancini’s “Experiment in Terror,” which was instantly recognizable to older festival goers as the theme music to the old Creature Feature horror show on channel 9 in the 70s. Their set veered between crunchy wave (“50 Year Old Man”), rowdy rock (“Accident,” “Come On Up”), and coiled quiet light funk (“I Want You” which featured some fine harmonies). Then Jon Langford’s Skull Orchard grabbed the stage and the night went flying off the rails.

As a long time member of The Hideout Family which also includes the dearly departed Mekons, Langford has managed to fine tune his “fuck-me-honey” charisma and flavor his  soul music with it, giving it a nasty bite.. Ripping through “Drone Operator” and “Trap Door” didn’t prepare the audience for surprise guests John Szyanski, John Mohr, and Sally Timms who grabbed a shruti and roared through a concrete shredding “Memphis Egypt.” The closer for the first night was delivered by Eleventh Dream Day with lead man Rick Rizzo burning through standards like “Tell It On the Mountain.’

It was a hellava great time, but it certainly did not prepare me for what was to follow on the second day. To be continued…

For photos of The Hideout Block Party 2017, click here