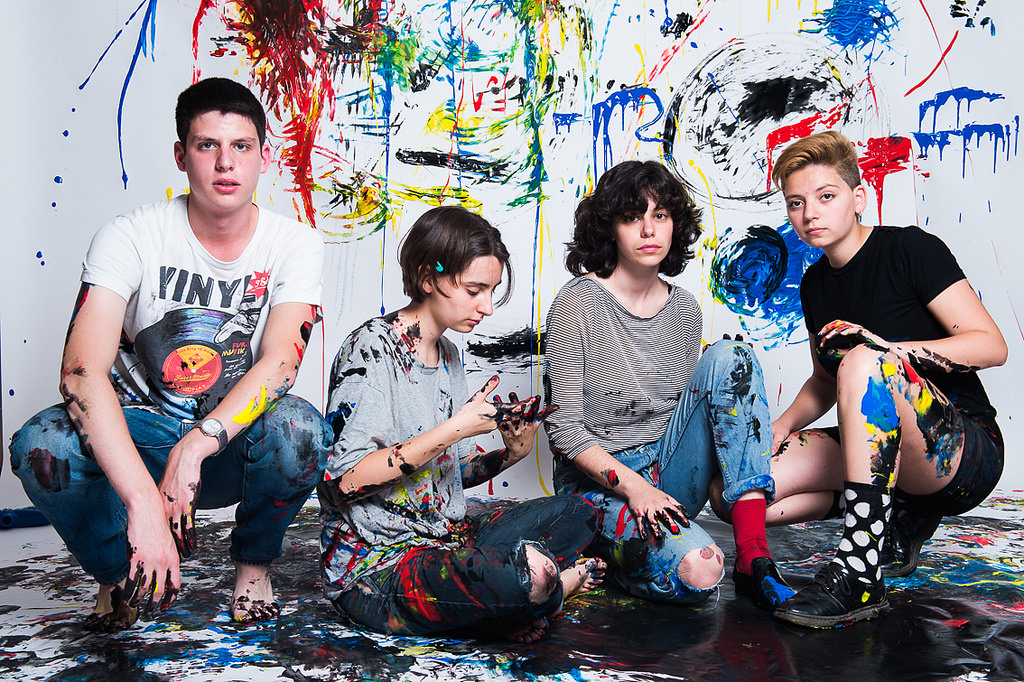 “Now on the fringe of adulthood and with two albums under its belt, Mourn is starting to adroitly settle in next to its punk contemporaries.” – Chicago Tribune

“Mourn are an impressively patient band, with a keen sense of dramatic dynamics and gritty groove that belies their primordial garage-band beginnings.” – Pitchfork

“As with most people their age, Mourn are rapidly evolving and yet fueled by a fervent core of its own insistently unique voice.” – Consequence of Sound

“…while these PJ Harvey-obsessives’ ages have been a topic of much discussion, they really have the chops to back it all up.” – Paper Magazine

“There’s a purity and directness to their music that many older artists would kill for… Mourn capture just how mercurial adolescence can be, switching from mischievous to deadly serious — and back again — in the blink of an eye.” – All Music

Today, Catalan band MOURN shares their new EP Over the Wall on Captured Tracks. The release is a collection of 4 covers and 1 unreleased track from their sophomore album, Ha, Ha, He! (2016). Wednesday, at the Knitting Factory, they played their first stateside show since the release of their breakout debut in 2014–a delay that was brought on by legal issues with their Spanish label. This group of wunderkinds has seen more misfortune at the hands of the music industry in just a couple years than many groups see in an entire career. Their return to North American will allow them to finally play Ha, Ha, He! live for audiences in the US and Canada since it was released in 2016. Dates below. Over the Wall is available to stream on Spotify and forpurchase on iTunes.

Order on iTunes | Stream on Spotify

MOURN are a group of Catalonian teenage wunderkinds making authentically great guitar-based music in an era when it’s considered almost unfashionable. Since their 2014 self-titled debut, the band has faced upsetting circumstances, both personally and professionally, that no artist should have to deal with, especially so early in what promises to be a long and fruitful career. When dealing with such a young band, you worry about the effects of early hype on their future; however, as the band’s 2016 sophomore release Ha, Ha, He! proved, we never needed to worry about MOURN’s path to becoming a great band – they already were one.

Though MOURN have continued their speedy ascent from local curiosity into an international band on the rise, there have been some unfortunate setbacks for the young band. A legal dispute with their previous Spanish label forbade them from touring, forcing them to remain absent or turn away all opportunities brought forth by the 2016 release of their fantastic 2nd LP. Now with their legal troubles finally behind them, MOURN return to the United States for a string of dates across the country with more energy than ever, ready to show the world what we’ve all been denied.

To mark their triumphant return, Captured Tracks is proud to release the digital/cassette EP Over The Wall to coincide with the tour. Featuring an unreleased track and four covers by various heroes and influences that belie the band member’s ages (The Replacements, Husker Du, The Sound, and Echo & The Bunnymen), Over The Wall is yet another raging set of songs that prove that MOURN cannot be held back and are not to be missed on this rare American tour. MOURN are finally free!

Over the Wall is due out September 8th on Captured Tracks. MOURN kicked off their NA tour at Brooklyn’s Knitting Factory on September 6th. See full run of dates below.