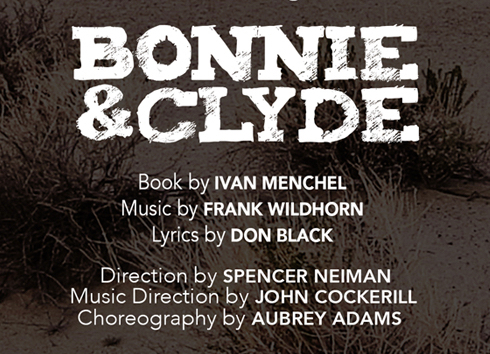 The 1967 film “Bonnie & Clyde” is among the greatest of all films, a work of art that cemented Warren Beatty’s auteur status and redefined the parameters of American cinema. Alas, the Frank Wildhorn/Don Black musical adaptation – also called “Bonnie & Clyde” and receiving its Chicago premiere from Kokandy Productions – is not up to those standards, though the show’s talented cast does all it can with the lackluster material.

The basic plot is similar, but critical details differ the musical from the film. Yes, Bonnie Parker (the excellent Desiree Gonzalez) and Clyde Barrow (an energetic Max DeTogne) do eventually rob convenience stores, diners, and of course, banks, but Black’s lyrics and Ivan Menchel’s passable book invest much more energy into the character’s respective backstories – although the true nature of those backstories, and their contrasts with the legendary film, often left me scratching my head at the artistic choices present (more on that later).

So between Parker and Barrow meeting, falling in love, and becoming notorious criminals, the musical weaves a somewhat tiring yarn of Depression-era struggles and yearnings, with the two heroes constantly singing about their desire for fame and fortune. More interesting are the musical’s complementary scenes of Nathan Carroll’s charismatic Southern preacher, who sings Broadway/gospel hybrids about salvation that add some much-needed variety to the show.

And Kokandy does feature an excellent cast in its production. As the preacher, Carroll is dynamic, exhibiting the kind of drive and passion that matches his character well. As Bonnie and Clyde, Gonzalez and DeTogne are in excellent voice, and bring as much passion as they can out of the rather two-dimensional characters Black and Menchel create. And as Clyde’s brother Buck, Cisco Lopez turns in yet another fine voiced, comedic performance, his presence ever likable.

There is much talent on display (from Ashley Ann Woods’ terrific scenic design to Robert S. Kuhn’s costumes), but the musical itself is simply not up to snuff, and a big part of that comes from the movie’s overwhelming shadow – and most critically, the musical’s difference from the movie. I am hardly one to insist that one medium is inherently superior to another; indeed, in the right hands, adaptations can be every bit as enthralling as their source material (see Lookingglass’ production of “Moby Dick,” which captures the book’s spirit by crafting something wholly different and original).

The problem with “Bonnie & Clyde” is that in its stabs at originality, it removed the most interesting parts of Beatty’s film, and added wholly perfunctory elements that do the musical no favors. For instance, when the show premiered on Broadway in 2011, the musical’s creators commented that they did not retain the film’s side plot of Clyde’s impotence, because there was no historical fact that he was impotent. However, removing that plot point not only robs the musical of a critical component of the film (its absence in the musical is deeply felt), but also, it stands in stark contrasts to the many things the musical DOES fabricate. For instance, the show’s creators had no problems fabricating Clyde’s break from prison, or presenting his brother Buck in a manner that is wholly divorced from reality (and not nearly as interesting as the character Gene Hackman played in the film).

If anything, the “Bonnie & Clyde” musical feels too safe, lacking in the risks and danger that makes the film remarkable 50 years after its initial release. It’s all very unfortunate, and I hope the show’s stars will find a show more deserving of their respective talents.