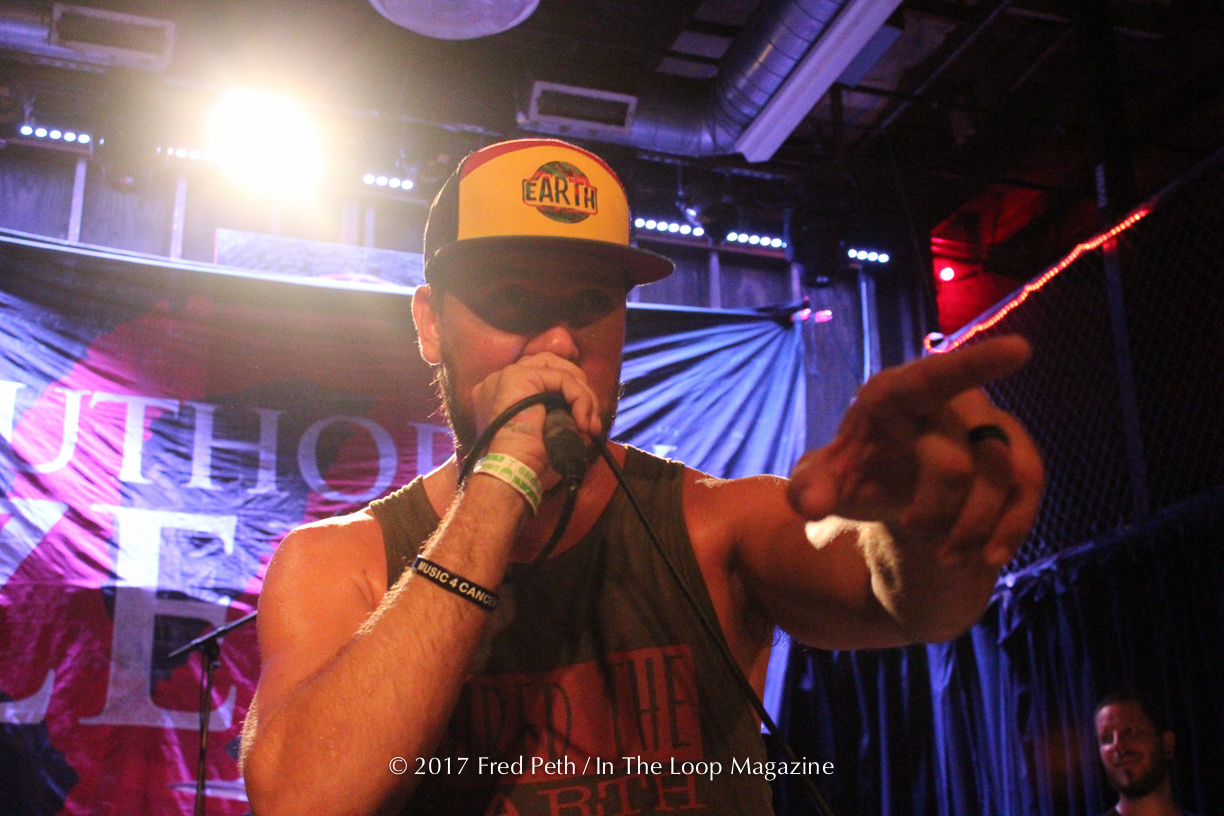 Authority Zero brought their latest studio album Broadcasting To The Nations to Reggie’s on Saturday night. They have been around since 1994 and showed no signs of slowing down. I have seen them a number of times and I was looking forward to hearing the songs they chose to do live from their new album. They definitely did not disappoint as they threw in a few songs that they have not played live in a long time from their previous albums. Their hour and a half set consisted of fan favorites keeping the crowd upbeat and moshing, while songs like “Summer Sickness” and “Big Bad World” gave us something to slow down and jam to.

For those who are not familiar with them, they are a punk rock band from Mesa, Arizona. They have a great mix of punk, reggae and some ska. The band consists of Jason DeVore (singer), Mike Spero (bassist), Dan Aid (guitarist) and Chris Dalley (drummer) with Jason being the longest running member. They definitely gave every ounce of energy into each song they performed. They started the night with the appropriate opener “First One In The Pit”, one of the hard hitting songs from their new album, getting the crowd instantly riled up. They jumped right into, “Take Or Leave It” from The Tipping Point. Those who were not moshing to this song were singing back to the band as they threw their arms in the air.

Authority Zero’s style is not to stop in between the songs to catch their breath. They move right into the next one and showed how the songs flowed perfectly into each other. Jason being a great front man interacted with the crowd leaning into them, giving fist bumps and high-fives. While Chris was slamming down on the drums keeping the crowd frenzied matching Jason’s quick vocals, Mike and Dan helped as they moved and jumped around on the stage.

The only time during the show the band took a break from playing music was when Jason gave an announcement to say that tonight was his wife Larisa’s and his 11-year wedding anniversary. This great moment was also captured on Facebook Live to a cheering crowd getting us to scream, “Happy Anniversary Larisa!”

After the anniversary announcement the band quickly got the crowd moving again with the fast tempo “Bayside” from their latest album. Jason brought out a couple of acoustic guitars for the songs, “Summer Sickness” and “Big Bad World”. Authority Zero continued the great night of hitting each song with the right amount of passion and energy. A couple times during the night a couple of guys got onto the stage and dove into the crowd’s waiting hands.

“When We Ruled The World” quickly became one of my favorites from Broadcasting To The Nations and I could picture the video playing in my mind as I watched the band. Promoting the new album on tour, they had to take out some of the songs they usually play, but had no problem replacing them with other excellent ones from their collection. They ended the night just as they started it on a high note with “Lift One Up” which was another crowd favorite.