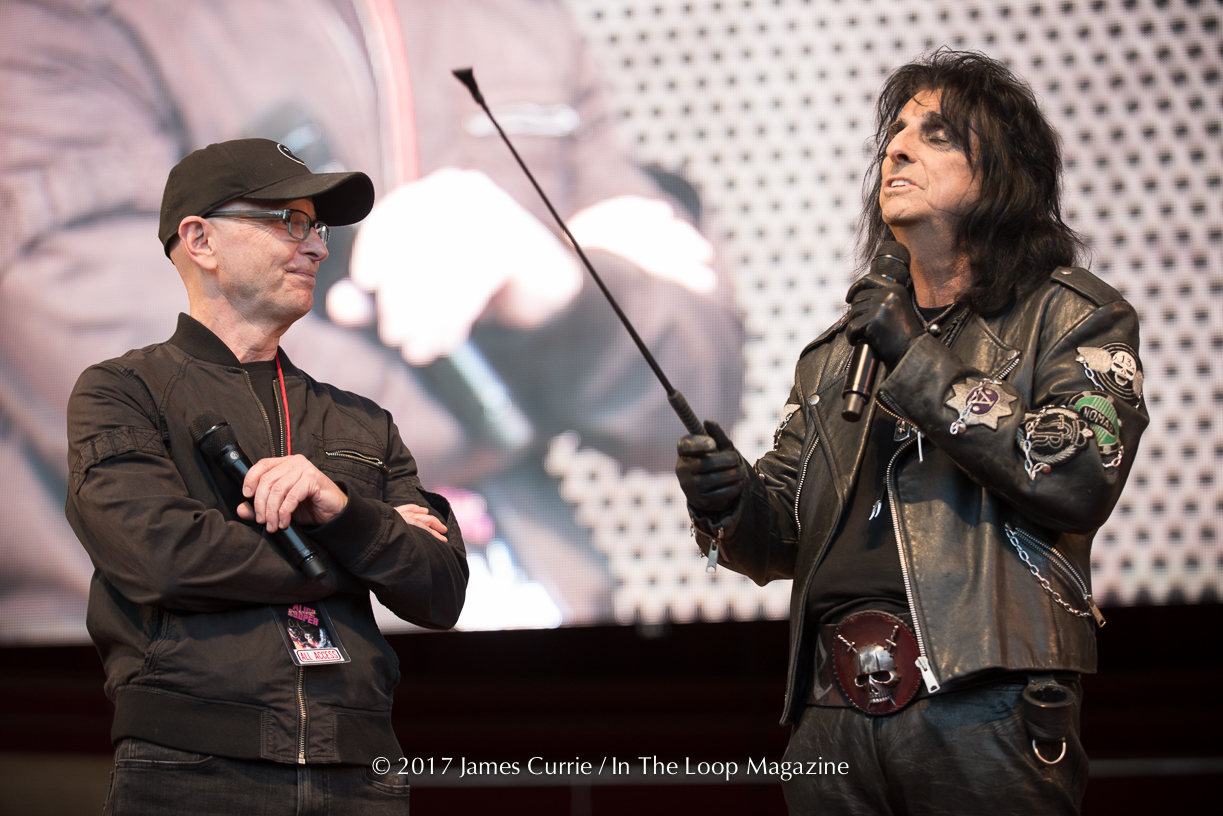 Last night, the legendary shock rocker and occasional actor, Alice Cooper, guest emcee’d a screening of the 1992 rock comedy classic Wayne’s World in downtown Chicago. The event was the final night of the ‘Summer Movies in the Park’ series the City of Chicago, DCASE and the Illinois Film Office puts on each summer. This years event was extra special as the “Prince of Darkness” talked about his role in the film, gave funny behind the scene stories and launched the film before an audience of thousands outdoors under the twisted metal structure known as The Jay Pritzker Pavilion in Millennium Park.

To start the night off, Cooper greeted the media in a pre-show gathering where he was honored with a custom made cake from ‘Batty Cakes’. Johanna Wyss, the creator of the cake, said she had always wanted to make a severed head (hurl) Alice Cooper cake and give it to the madman himself. Well, thanks to the organizers of this event, she got her wish. And Cooper seemed to take it all in stride walking up to the table with his head on a silver plater saying, “What do we have here?” as he met his beheaded twin on the table. Wyss described how she made it saying it was a red velvet cake with lots of fondant that made the hair strands and realistic eyes. Not sure about the red liquid oozing out, but…

After the cake creation comity, Cooper was directed to a media pulpit where he answered questions from the press. Questions were asked about his involvement in the film, his interest in the dark side of theatrics and where he drew inspiration for his latest release, “Paranormal”. He answered with quick responses before being whisked out to the main stage to intro the movie.

Several minutes later, Cooper was introduced by Rich Moskal of the Chicago Film Office and Marty Lennartz from WXRT who fielded questions. Cooper walked out to the crowd and Lennartz shouting, “We’re not worthy! We’re not worthy!”

Cooper talked about how he told Wayne (Mike Myers) and Garth (Dana Carvey) he was going to do the scene in just one take. “I came in and said, let’s do this, Myers and Carvey proceeded to do the “We’re not worthy” scene. Said Cooper. “They tried everything they could do to make me break character and laugh. They said and did some things that if ever came out in a blooper reel might damage their reputation.” WAY! He also went on to say that this was the best of the two films when one press agent asked, “Which movie where you in?” to which he replied, “The best one.” Cooper was a fan of Myers and Carvey saying, “This was the highlight of there careers, they were really on top of there game.”

After about 5 minutes of “party on” discussions, Cooper threw his walking cane into the audience, thanked everyone and walked off stage setting the movie screening in motion. It was a chilly September night but the fans turned out filling the field and pavilion chairs with anticipation and audience participation. You could hear shout outs of iconic movie lines, singing along to classic songs like “Bohemian Rhapsody” and hefty laughter during the most idiotic parts from the would-be Aurora Illinois basement production dynamic duo.

Alice Cooper was also in town for a concert at the Hollywood Casino Amphitheatre in south suburban Tinley Park that would happen the following night.