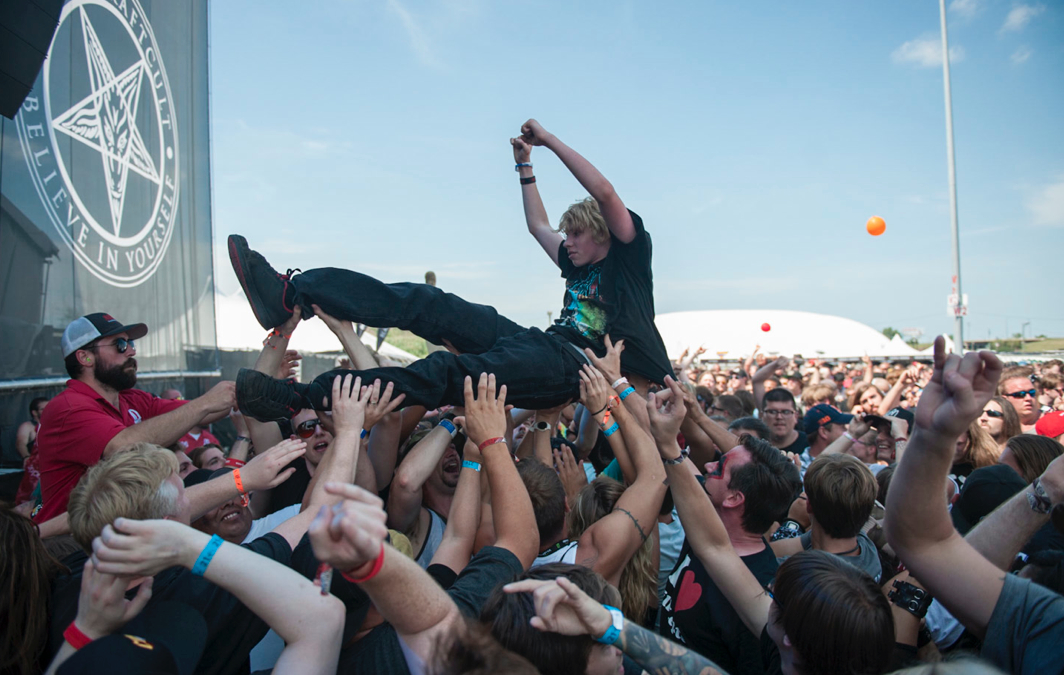 The third and final day of Chicago Open Air featured some of the heaviest hitters of the weekend, solidifying the event as a genuine contender in Chicago’s busy festival season.

Leading the pack early in the day was a cast of stellar acts including Devil Driver, Demon Hunter, Hellyeah, and Behemoth, with Amon Amarth taking the main stage accompanied by their Viking war ship.

In the current landscape of metal bands who will guarantee a passionate, capacity crowd, there are few as consistent as Lamb of God, and the quintet proved their mettle once again, opening with a savage rendition of “Laid to Rest.” Vocalist Randy Blythe never runs out of energy, and his passionate performances of tracks like “512” and “Engage the Fear Machine” (which Blythe dedicated to the ‘fake news media’), alongside the airtight rhythm section of drummer Chris Adler (an unsung talent in the industry, to be sure) and bassist John Campbell had the field at near capacity during daylight hours, which is no small feat. Given that Lamb of God’s future was in question just a few short years ago, it was a triumphant performance that should have solidified the band’s stature for the uninitiated.

Corey Taylor is surely one of the hardest working men in rock (alongside Gary Holt, who we’ll get to in a minute), and Stone Sour’s return to the concert stage following Taylor’s exhaustive stint with Slipknot was more than welcome. The band’s new album Hydrograd features some of the best elements of Taylor’s “other band,” with king-sized hooks over massive-sounding riffs, and while Stone Sour’s sound is a bit more stripped than Slipknot, Taylor’s voice is unmistakable; live, the line is even blurrier as Taylor growled his way through tracks like Hydrograd opener “Taipei Person / Allah Tea” and new single “Song #3,” as well as older fan favorites like “Made of Scars” and “Say You’ll Haunt Me.” Taylor’s enthusiasm for being onstage is infectious, and the set was one of the weekend’s biggest highlights.

The hour had then come for thrash metal royalty to take the Blackcraft Stage. Slayer remain the most stalwart in their dedication to style and craft of all the old-school thrash bands, and the band’s perseverance over both the departure of original drummer Dave Lombardo and the death of founding guitarist Jeff Hanneman before the release of 2015’s Repentless speaks to both their love of the music as well as their fans, perhaps the most vocally dedicated demographic in all of metal. Raging through an hour-long set of some of the most well-known slabs of evil in the heavy metal canon (“Chemical Warfare,” “Hate Worldwide,” and “Disciple” among the highlights), the foursome of Tom Araya, Kerry King, Paul Bostaph, and Gary Holt (who remains a full-time member of his original band Exodus) remain nearly unrivaled. As Holt raised his fists to the sky in triumph during the breakdown in set closer “Angel of Death,” he spoke for everyone in the massive crowd gathered in the concrete field – Slayer have emerged triumphant from the troubles of their past, and the metal community is better for it. (If there was a single scheduling misstep on COA’s part, it was relegating Slayer to the second stage, which would have been borderline insulting if not for the fact that it was hard to argue with the sky-high Blackcraft pentagrams flanking the stage.)

As Friday ended with the elder statesmen of hard rock (KISS), so Sunday ended with the godfather of all metal: Ozzy Osbourne, who, having recently reunited with guitarist Zakk Wylde, had the main stage area nearly overcrowded, burning down classic after classic. Opener “Bark at the Moon,” “Mr. Crowley,” “I Don’t Know,” “Suicide Solution,” as well as obligatory Sabbath cuts “War Pigs” and “Paranoid” – the list went on, and the energy level never dipped for a second, leaving one to wonder if Ozzy does in fact have a deal for his soul somewhere out in the netherworld. From a performance standpoint, there could hardly have been a better closer to the festival, sending the second year of COA out on the highest note imaginable, living proof that great rock and metal is timeless, easily boasting the most dedicated fan base of any genre out there.

What started just last year has evolved in its second year into a spectacular experience for metalheads everywhere. Toyota Park is the perfect venue for such a celebration of heavy metal, and vendors like Blackcraft, Nuclear Blast Records, and hometown favs Kumas Corner, along with a host of artist signings, made the event that much more exciting. Let’s hope that Chicago and the surrounding metro area embrace a third year in 2018 – the heavy metal community needs Open Air in Chicago as much as we need Pitchfork or Lollapalooza, if not more. In an era where giant festivals are typically large-scale excuses for corporate interests, Open Air had a refreshing purity to it.