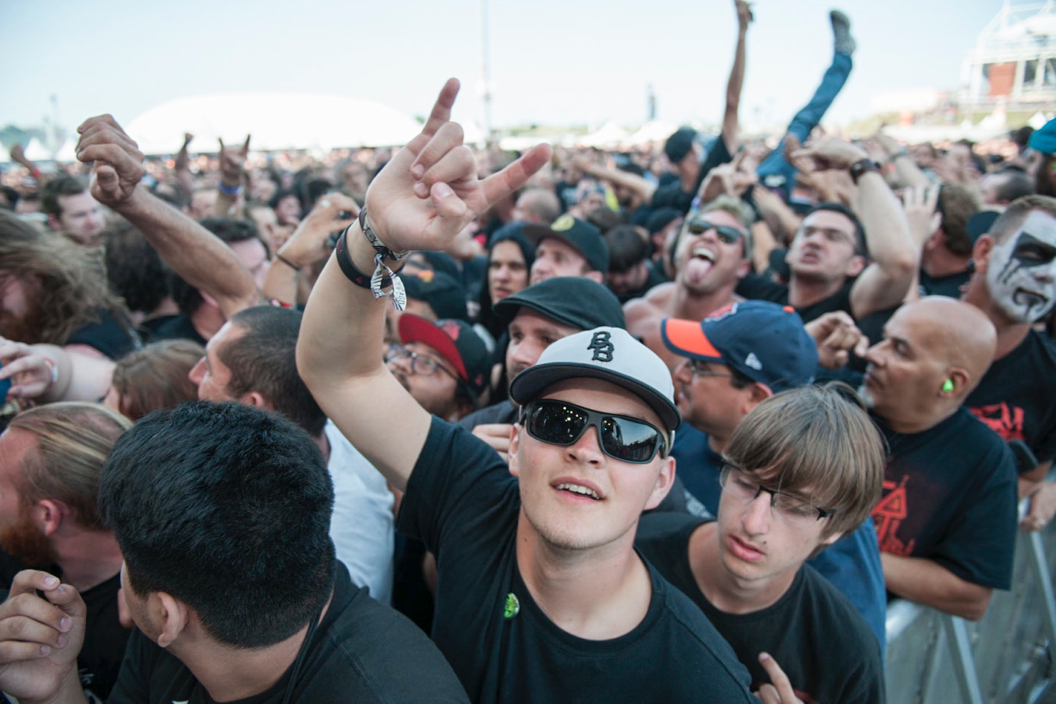 Festival season has been very much in the air for a while now and 2017 is no different. The second annual Chicago Open Air, which features some of the hottest and most popular metal bands took place at Toyota Park in Bridgeview this past weekend. Many, many well known names were on the bill like Korn, Rob Zombie, Kiss, Ozzy Osbourne as well as more underground and lesser known names like Vimic, Clutch, Whitechapel, Demon Hunter among others. Several of the highlight names on Saturday included bands like DragonForce, Avatar, Mushroomhead, Steel Panther, and many more. The opening of the Saturday show featured names like Black Map, Metal Church, Cane Hill and Pig Destroyer.

It wasn’t until London’s own DragonForce hit the stage where things really begun to heat up and the crowds began to get wild. The group recently released their latest album, Reaching Into Infinity, and the Chicago masses experienced nothing but fury and ravaging guitar demons with Herman Li and Sam Totman, the guitarists for the power metal sextet. Lead by vocalist Marc Hudson including bassist Frederic LeClercq, drummer Gee Anzalone and keyboardist Vladamir Pruzhanov, the group had limited time, as this is a festival, and kicked their fast setlist with Fury of the Storm. As the group was in support of a new album, Ashes of the Dawn, the latest single from the new album followed along with Cry Thunder and their cover of Johnny Cash’s, Ring of Fire. As this was a festival, they only had time for one more tune and it was the most famous one of all. Through The Fire And Flames closed their set list and after one final bow to the audience it was time for the next act.

The festival featured a handful of overseas bands as majority of the lineup all weekend consisted of US based artists but one of those names from overseas also included Sweden’s own Avatar. An original act, they did an absolute phenomenal job of getting the masses pumped and very energized. One of the better acts on the bill, the band in their circus themed attire and lead man Johannes Eckerstrom, with his more clown inspired makeup launched their setlist with the heavy hitting anthem, Hail the Apocalypse. Majority of their tracks were from their album Black Waltz as well as their latest release, Feathers & Flesh. Paint Me Red and New Land followed by The Eagle Has Landed and Let It Burn. Lead man Johannes, did a fantastic job in between songs, really getting into the minds of the fans and creating a sinister atmosphere and at times dishing out some dark humor. Their very popular track, Smells Like a Freakshow closed off their short but memorable setlist.

It certainly felt like Halloween had come a little early when Cleveland’s, Mushroomhead, graced the Black Craft stage in their hauntingly demonic attire with face masks, corpse paint and the works. The group had hinted that they were tentatively set to release a new album later this year so their appearance was most appropriate. They launched their assault with the single, Qwerty from their last album titled, The Righteous and the Butterfly. The drums were covered in water, so it created a great stage effect of water bursting into the air every time they were struck. Though there was some technical difficulties with the vocals initially, the band bounced back with another heavy hitter, Our Apologies. The group had one of their tracks featured in the famous movie, Freddy vs. Jason, which became one of their classic hits titled, Sun Doesn’t Rise, which of course they played that tune. What really made the crowd go wild was when several of the members begun to crowd surf and really became one with the audience. None of the other acts had the courage to get into the pits and crowds. The remainder of the setlist included We Are The Truth and Nowhere To Go.

What’s great about metal festivals is the amount of genres there are. While metal has evolved to what it was many years ago, there are always those who are influenced from past-times as was the case with comedic glam/hair metallers, Steel Panther. Inspired solely by the 80’s and the longtime motto of sex, drugs and rock n’ roll, most of the band’s lyrics are parodied and sometimes they are not, such as their harder tune, Eyes of a Panther. Following suit, Party Like Tomorrow Is The End Of The World followed by some jokes from the band in between songs. As the day had a serious and heavy atmosphere, it was quite a change of pace to hear some comic relief. That lead to their interestingly titled and lyrically themed semi-ballad, Fat Girl and the amazing track Death to All but Metal. After dishing out jokes and hilarious insults about various artists and celebrities Poontang Boomerang followed by a cheesy ballad known as, Community Property. It wouldn’t of been a true party without any females on stage so the band invited as many ladies as they could to dance on stage for the tracks, 17 Girls In a Row and Gloryhole. The band gave the fans one final message before they went into the final track of their list, Party All Day.