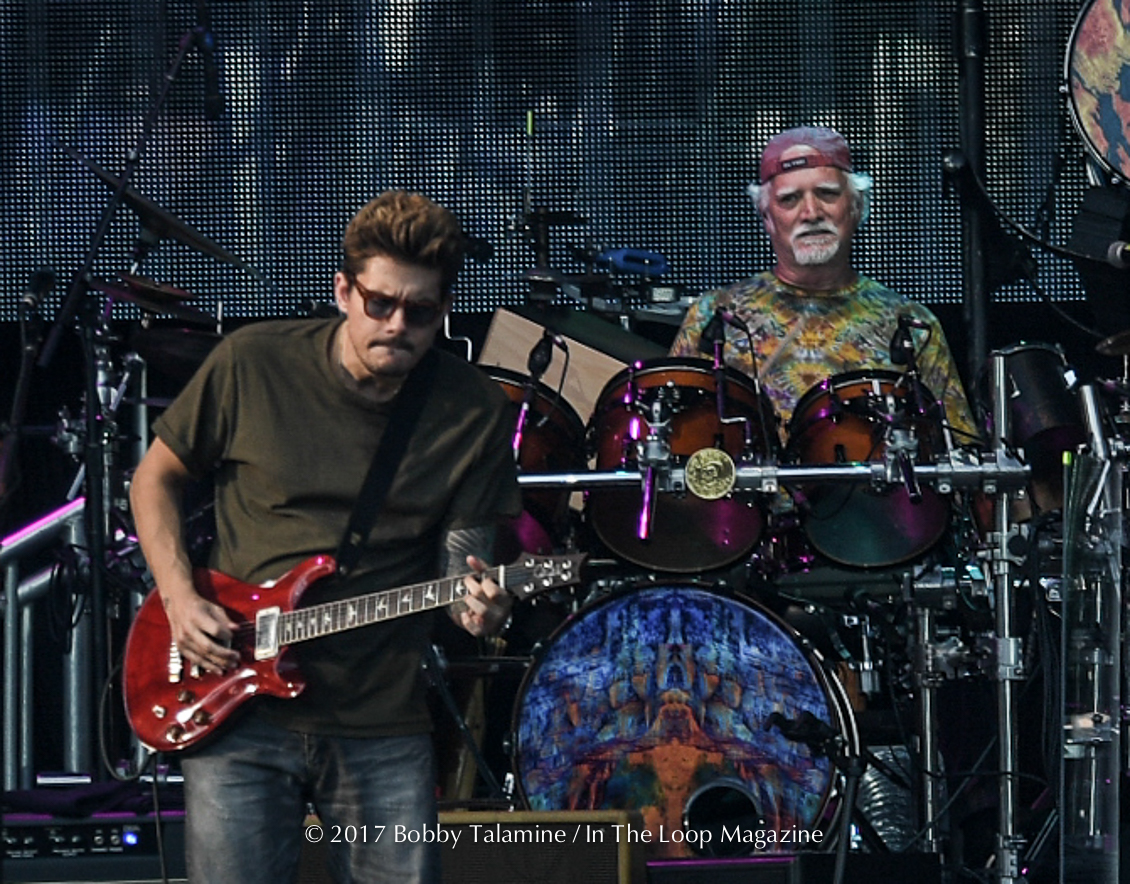 Let’s look at the gigantic elephant in the room, right off the bat.

Yes- Jerry Garcia, his vocals, his guitar playing, his songwriting, still loom large on any incarnation of what the surviving members of the Dead want to make themselves out to be. That’s understandable. A band of that stature, The Grateful Dead, touring incessantly since the early seventies, building a rabid and devoted fan base from the ground up, then losing tragically it’s spiritual guru would have a serious effect on any super successful band, especially if they want to push on.

What makes the Dead stand out from the pack is that there’s so many elements of their unique sound and group participation. Take for example Bob Weir. He has a hold of singer / songwriting to match Jerry Garcia.

And the drummers- Bill Kreutzmann and Mickey Hart, haven’t changed their mood and style of drumming since the beginning. The only difference between now and then is the the gray hairs they have accumulated over time.

And there’s your core Grateful Dead members, continuing on in their new incarnation known as Dead & Company.

Now add Oteil Burbridge on Bass, Jeff Chimenti on keyboards, and you have the makings of another Dead jam band.

The addition of John Mayer on guitar and vocals. That’s the tricky part. Another version of suspense to see how this would pan out, if it would be worthwhile and satisfying having John, and accepting John in an integral roll of interpreting all things Jerry Garcia.

But I have to say with certain songs that Jerry sang and wrote- it’s sorely missed.

On the other hand, John Mayer has his own unique sound as well, and contributes his version of all things “Dead” in his own way.

And that’s the mood of Deadheads in Wrigley Field: some like me – on the fence with John Mayer in the band, some wholeheartedly accepting of John, and just completely content in having their heroes still attempting to play all things Dead.

The night continued to build up a slowly textured jam that provoked bodies to shake and swing like the early days, some extended jams provoking large applause and whistles from the devoted faithful while the double drummers chopped and chopped at the beat.

This propensity of extending song after song with flights of intimate guitar fancy only heightened the mood of being transfixed to the spiritual world and escape from the average droll of the day and day.

As for me, Mayer deserves some credit in contributing to the Dead. But let’s be real. He’s no Jerry Garcia.

But it definitely wasn’t a trainwreck. The essence of the Dead is a group that seriously wants to jam as a group. A gentle improvisational group at that.

Today they announced another batch of shows for the fall. So it’s obvious they enjoy each other’s company, and want to extend the good vibes of jamming and playing their iconic songs.

With more live shows and rehearsals, comes more confidence in showmanship and interpretation.

And maybe, just maybe,  I’ll get my head around accepting John Mayer’s vocals.

In the meantime, with two nights at the venerated old ballpark that is Wrigley Field: it was good vibes all around.

I owe that of watching and having fun with the Deadheads as much as watching and listening to the members of the Dead.

For photos from the Dead & Company at Wrigley Field, click here

6: Friend of the Devil

10: Dancing in the Street

14: Fire on the Mountain