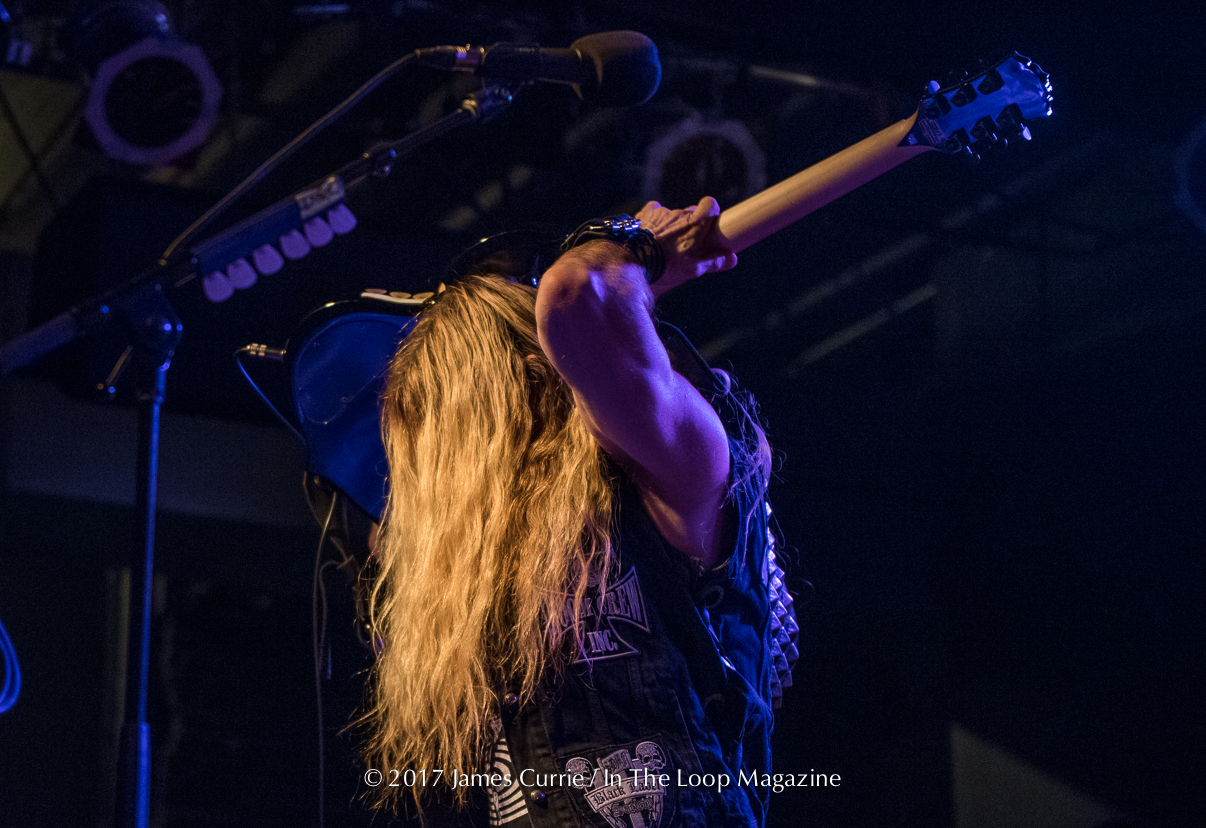 Zakk Wylde is back again with his ultimate Black Sabbath tribute band, Zakk Sabbath. His three piece consists of himself on guitar and vocals, Blasko on bass and Joey C on drums. Each member is a veteran in the rock industry and lifetime fan of the British metal legends. This time around, we find the band playing a night in the west loop’s, Bottom Lounge.

Zakk Sabbath is out on tour again this time with sludge-doom-stoner metal act, Beastmaker from Fresno, California. This night, they played through the early years of the Black Sabbath catalog to a sold out house of Sabbath fanatics. These are loyal fans not just of Black Sabbath, but Zakk Wylde too as we saw plenty of “Doom Crew” biker vests, viking shirts and Sabbath gear of all kinds.

Wylde is a fanatic of music, especially Black Sabbath and Ozzy Osbourne. We know he’s played with the man himself, Ozzy, during his solo career, but his loyalty goes even deeper than that. He has a son named, Sabbath Page Wielandt Wylde. Yes, after Black Sabbath. The adoration of rock n roll is in his blood. It’s not just a career for Wylde, this is his life and his family’s life too. Other children are named after other influences in rock like Hendrix Halen Michael Rhoads Wylde. That name alone pretty much covers his rock respect. So it seems like a natural progression to have the world’s best Sabbath tribute band in his roster.

The rest of the band are accomplished and respected musicians in their own right. Blasko, AKA Rob “Blasko” Nicholson, has been on the scene since the mid 80’s. He’s played with heavy hitters like Danzig, Rob Zombie and Ozzy Osbourne as well. Joey C, AKA Joseph William Castillo, also someone who’s no stranger to the industry. He’s been a part of Danzig, Queens of the Stone Age and Eagles of Death Metal. Grouping these guys together just made sense. And it works.

Before they hit the stage, the warm up music was Soundgarden. The house played “Badmotorfinger” and the audience was singing along with every song. Toasting drinks, giving high fives and deep hugs. This alone was moving as so many still grieving the fallen signer from Seattle. The lights dimmed and the storm sounds began.

This time around Zakk Sabbath played a stripped down version of their show. A simple low lit stage with a hung banner backdrop and a wall of sound. No special effects or gimmicks just Wylde commanding the stage as always marching back and forth, shredding the hell out of his Gibsons. Blasko and Joey C keeping the time and back line groove going. Seeing Wylde play is a treat in itself. He’s a guitarist’s guitarist. He’s absolutely technically skilled in every way, but also a great front man. He shows off those skills without coming off as arrogant. He just shows up, belts out the songs he loves and destroys the amps in the process. Just straight forward in your face, balls to the walls rock n roll.

The crowd was digging it and grooved right along with every track. The Bottom Lounge is a great venue for them. It’s the right size, the right sound and the right people. This place is fun, sounds great and a true old skool clientele rock club for real music fans.

I’ve said it before, but worth repeating, seeing Zakk Sabbath is one of the greatest tributes to the London legends you can see. Black Sabbath may be retired and gone, but thanks to the love and adoration of Wylde & co, we can keep that metal dream alive. Zakk Sabbath are the next best thing to the original in every way. They not only have earned it, but deserve it. I’m sure Ozzy and the boys would agree.

If you miss Zakk Sabbath, you can check out Zakk Wylde this summer as he rejoins his rock legacy at Ozzy’s side as he comes back to town to play Chicago Open Air Fest at Toyota Park. Ozzy will have Wylde and Blasko back at his side as the Sunday night headliner during the three day hard rock music festival.

For more on Zakk Sabbath, including future tour dates and releases, click here

For photos from the Zakk Sabbath show in Chicago at Bottom Lounge, click here

Setlist for Zakk Sabbath live in Chicago at Bottom Lounge, 06.02.17