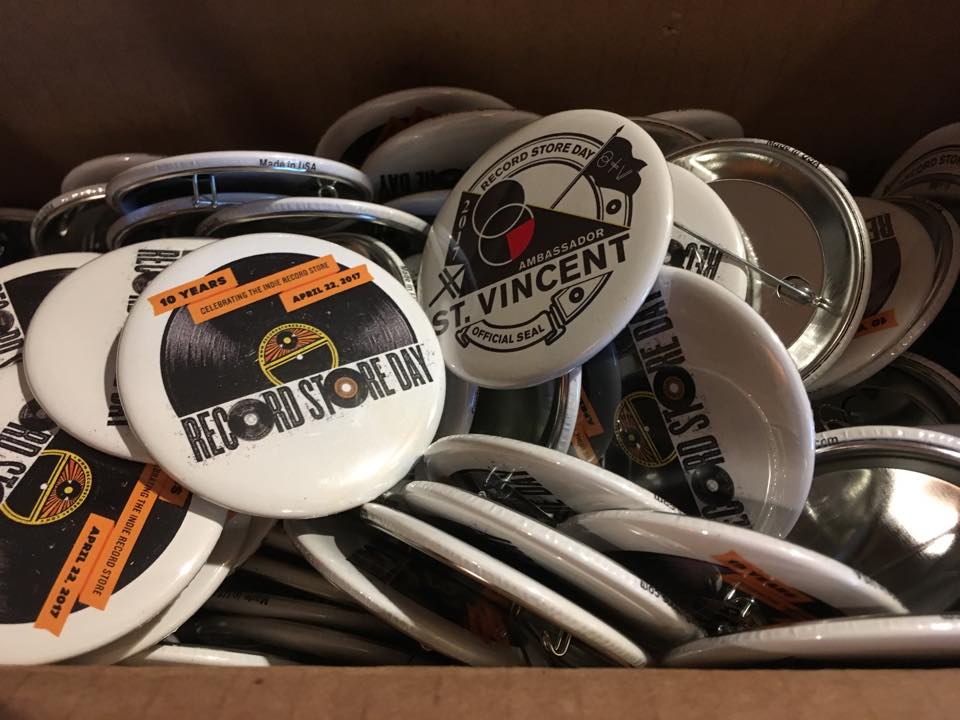 From The Folks At Record Store Day:

The list of titles being released ONLY AT RECORD STORES is only a click away, in TWO versions: A handy PDF that you can use as a shopping/wish list and a Pull Down menu with more detail and artwork.  These are the pieces that will be released at REAL LIVE RECORD STORES on April 22. Keep in mind that things change OFTEN in this world, and we’ll be making changes to the list when that happens. Fixes, tweaks, new descriptions, additions and cancellations as they happen. Life is a work in progress, there’s a poster out there with a kitten in an adorable but precarious situation that says so. And so is our list.

*There is chatter in the world about other titles that may not be on the list. These may be things that have a 4/21 or 4/22 street date, but are not RSD releases, for whatever reason. Something you want not on this list, but you know for sure it’s coming out? If yes, are you going to buy it at an indie record store? If yes, awesome.

*We’ve said it before, but it’s worth repeating. It’s always a good idea to be BFFs with your neighborhood record store and let them know what you might be looking for. They can’t guarantee you will walk out with what you want, but it’s a good place to start. ALL STORES MAY NOT ORDER ALL RELEASES. ALL STORES MAY NOT GET EVERYTHING THEY ORDER. Record Store Day titles are limited for a number of reasons, and all in all, that’s a good thing. But please bear that in mind when you find something isn’t available. We’re all grown-ups, right?

*You may notice that the artwork for these titles is watermarked this year. That’s a small attempt to take a swipe out of the advance auction site market. When you see a title listed on an auction site before RSD, it’s almost CERTAINLY someone who has listed something they do not have in hand, and can’t guarantee they will have in hand, because they’re going out to a store to try and get it on 4/22 like everyone else. They call it a “pre-order” but since they’re not getting distributed to, it’s not a pre-order. It’s more like a scam, really. We work very hard to investigate the listings and in the tiny percentage of the time over the past ten years that it has been a store behind it, there have been serious implications for that store. It is almost always someone taking advantage of the excitement of Record Store Day and the releases. Which is the same thing that happens when a cool shoe, car, dress, cookie or anything else is released. We may not stop it altogether, but we can make it a little harder for them. Thus, the watermarked art.

FOR A SPECIAL KICK OFF STARRING THE ARTIST HERSELF VISIT:
WWW.FUNNYORDIE.COM

In 2009, Jesse Hughes of Eagles of Death Metal created it. Since then, the title of Record Store Day Ambassador has been held by Homme, Ozzy, Iggy, Grohl, Jack, Chuck and Metallica.

Says the artist, “It is with deep honor and humility that I accept this ambassadorship. Rest assured I do not take my duties lightly.”

St. Vincent has spent the better part of the past decade forging a customized path to legendary status herself including a steady incline of hyper-critically acclaimed solo efforts, one of which, her eponymously titled LP St. Vincent, commanded a 2014 Grammy win for Best Alternative Music Album, not to mention 2012’s lovingly embraced collaboration with David Byrne, Love This Giant.  The guitarist worked with Ernie Ball to create a signature guitar, and recently turned to film, writing and directing her first movie, a short film featured in the horror anthology XX.

Record Store Day co-founder, Carrie Colliton proclaims, “Being the Ambassador of Record Store Day is meant to be fun and a little silly, and I think it’s fantastic that we’re celebrating this year with a woman who can be both those things while being a respected musician and record store regular as well. It’s a damn good fit.”

For a unique glimpse at the “silly,” visit funnyordie.com or www.recordstoreday.com for Madame Ambassador’s Official Record Store Day video.

And rest assured, we are deeply honored ourselves.