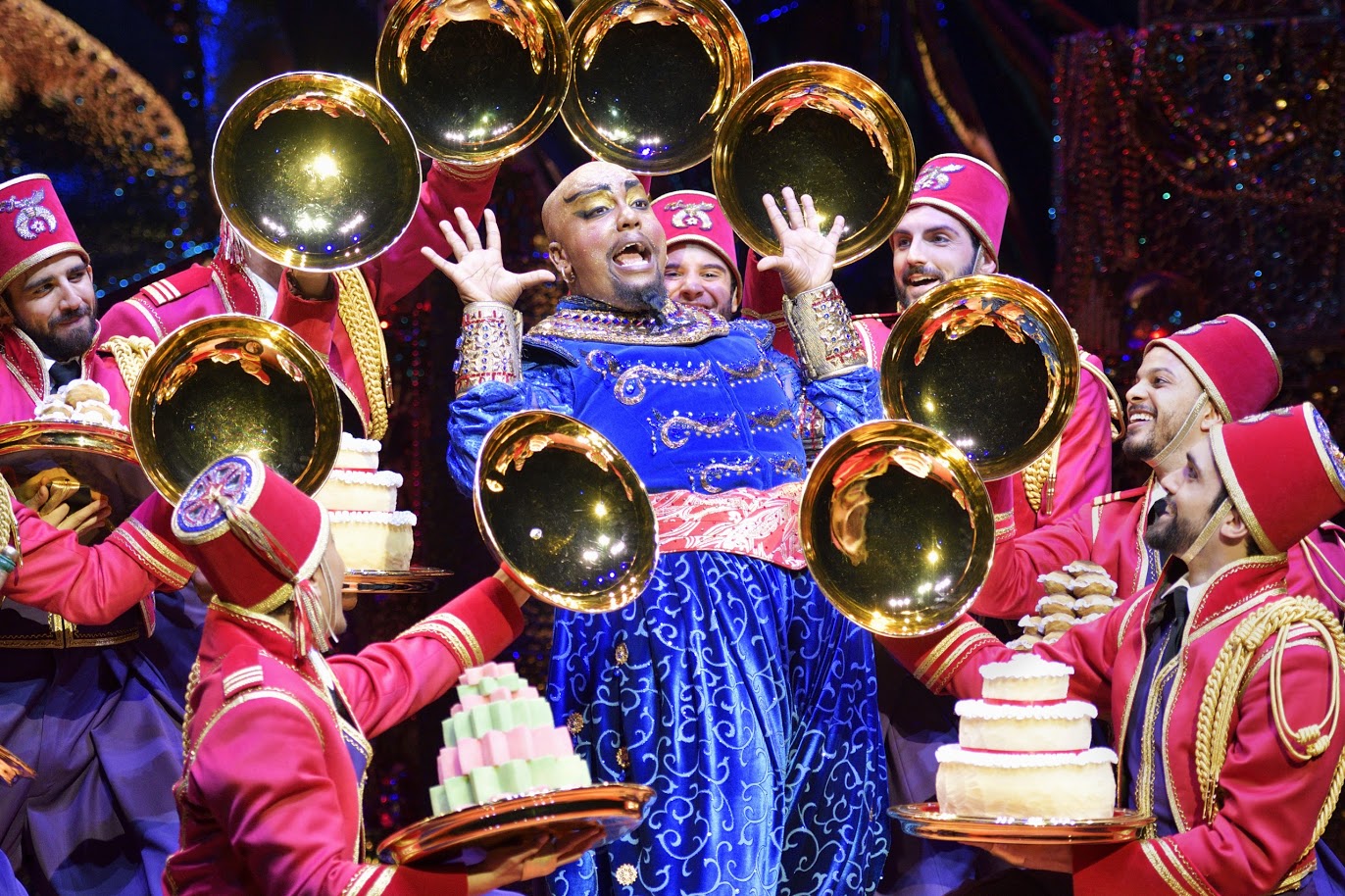 ‘Disney’s Aladdin,’ which opened a limited run at the Cadillac Palace Theatre this week, is among the most spectacularly staged musicals I have ever seen. With scenic design by Bob Crowley, the Casey Nicholaw-directed production sways between fantastical recreations of Agrabah, gorgeous renderings of the Sultan’s palace silhouetted against a blue, star-filled night, and most dazzling of all, an immense Cave of Wonders filled floor to ceiling with precious treasure. The show is a masterpiece of design, and even if it did not feature a talented cast and memorable songs – which it certainly does – it would be well worth seeing.

The plot of ‘Aladdin’ has entered the American lexicon, and the movie’s musical adaptation does not stray from its nuts and bolts: orphan Aladdin (a charming Adam Jacobs, who originated the role on Broadway), a “street rat” who steals for a living, unwittingly falls in love with Princess Jasmine (a charming Isabelle McCalla), the Sultan’s headstrong daughter who has refused every suitor seeking her hand (and thus, ascendance to the kingdom’s throne). After being apprehended by the Sultan’s evil grand vizier, Jafar (a wickedly charismatic Jonathan Weir) – who himself aspires to rule the kingdom – Aladdin is recruited to fetch a lamp from the Cave of Wonders, during which he is introduced to the lamp’s sole resident, an all-powerful Genie (the fabulous Anthony Murphy) who grants him three wishes.

That said, the first act of ‘Aladdin’ is a rollicking delight, namely in how it builds upon the plot and themes of the movie. With music by Alan Menken and lyrics by Howard Ashman, Tim Rice, and Chad Beguelin (who also wrote the show’s witty book), the show expands upon Aladdin’s hard luck life, Jasmine’s feelings of isolation and yearning, and Jafar’s schemes, bringing engaging music and choreography to flesh out the character’s feelings and motivations. Everything culminates in a truly jaw-dropping sequence of “Friend Like Me,” the Genie showcase that is so varied and spectacular that it renders the movie’s original version tame by comparison.

And key to that first act’s success is the casting, especially Anthony Murphy as the Genie. Robin Williams is so closely identified with the Genie role that I wondered how the stage’s character would compare, but Murphy and director Nicholaw have wisely gone in a completely different direction, and crafted a character that is, honestly, far more interesting than the pop-culture-spewing character that Williams improvised. Simply, Murphy’s Genie is fabulous, a character thoroughly in step with RuPaul’s Drag Race and other forms of popular gay entertainment. And add to it that Murphy is Black, and the Genie – a character pining for his freedom after an eternity of servitude – takes on a whole new level of significance. Like most of Disney’s classic musicals, ‘Aladdin’ is on shaky ground when it comes to race and cultural accuracy (infamously, the title character’s face and build were modeled on Tom Cruise, and indeed, Jacobs is white), so Nicholaw and Murphy’s modern take is thoroughly appreciated.

The rest of the cast is similarly strong. As Jafar, Weir is scrumptiously evil, bellowing his lines with acidic precision. Zach Bencal, Philippe Arroyo, and Mike Longo, who play Aladdin’s friends, are all plucky and fun. And finally, Jacobs makes for a very engaging hero, with fine stage instincts and a voice that is tailor-made for Disney songs.

But if there is one area where ‘Disney’s Aladdin’ missteps, it is in the show’s second act, which lacks the nuance and depth of the first act. Alas, it is the show’s plot that is to blame. As successful as the show’s writers are at expanding the plot through the first act, the second act – which begins with Aladdin marching upon the Sultan’s palace as the newly created Prince Ali – stretches the remaining plot developments far too long, even using an unfortunately unnecessary (and overly long) song involving Aladdin’s friends to pad out the time. Even more, after spending so much time with the musical’s characters in the first act, the show’s second act gives them short shrift. Take Jasmine, for example. It’s common knowledge that she and Prince Ali fall in love while singing “A Whole New World” during a magic carpet ride, but isn’t this Jasmine supposed to be immune to such razzle dazzle? Shouldn’t it require more work to woo such an independent woman?

Admittedly, those are the questions that critics like myself will walk away asking. For most of the parents and children seeing ‘Aladdin,’ such concerns will hardly register. The musical is undoubtedly fun and imaginative, and is a most welcome addition to the city’s theater scene.

Running through Sept. 10 at the Cadillac Palace Theatre

Tickets are available at: https://www.broadwayinchicago.com/show/disneys-aladdin/