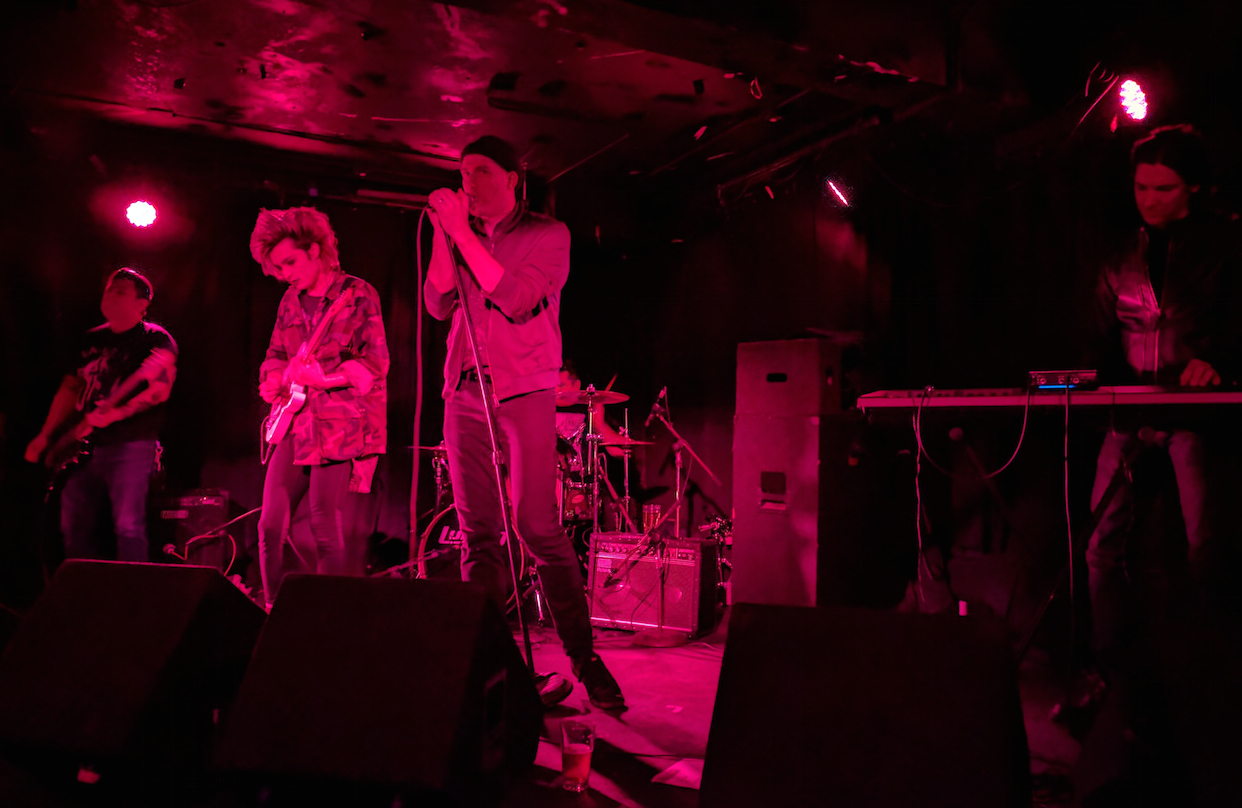 A few months ago, the iconic eighties band Modern English announced a tour stop at the Empty Bottle down on Western. Included on the roster were the local bands Ganser and Silent Age, two Chicago bands I began following last summer and two fantastic examples of the burgeoning post-punk revival scene. With two great Chicago bands supporting one of the most legendary bands from the eighties, the show had all the makings of being one for the ages. Unfortunately, it seemed fate could not stand to see the three of them sharing the Empty Bottle and disaster inevitably struck. A sudden medical emergency forced Modern English to cancel their appearance at the Bottle along with the rest of their tour. Nevertheless, Silent Age stepped in as the headliner while another musician, “Tuth”, joined the roster. Together, all three bands staged a memorable show on Thursday night.

The first band, Tuth, opened the show with its slow, brooding ambient music. A musical project conceived by Damon Carruesco, a member of the local band Disappears, Tuth’s music consisted of only dark instrumental arrangements magnified by sharp and heavy bass beats. While the music itself was neither interesting nor boring, I had a problem with the musician’s onstage presence. It was like a puff of air. When the show began, he entered the stage without any introduction and left without anything said about his music or of how the rest of the show would play out. Furthermore, because of Tuth’s unassuming entrance onto the stage, the audience did not know whether Tuth was a member of the stage crew or one of the bands listed on the roster. It was not until he began his set when the audience realized that he in fact, was the first musician listed. When that happened, people did trickle towards the stage, but a vast majority stayed at the bar. Because of the confusion, the show got off to a dubious start. Nevertheless, Tuth’s music was serviceable, but it would have been much better had there been more attention called to his performance.

The next band, Ganser, kicked off the show properly with music off their latest EP This Feels Like Living. These stunning post-punk revivalists are, I believe, the toast of Chicago. Featured in the Chicago Tribune and outlets such as the Consequence of Sound, Ganser surpass the hype ascribed to them. Channeling the spirit of Joy Division and other post-punk bands, they delivered an explosive performance that immediately shifted the audience from the bar to the stage. Their sound alternated between dark, brooding melodies and sudden explosions of atmospheric brilliance. Of their memorable set, “Pyrrhic Victory” was the standout, with its heavy, primal drumming from Brian Cundiff, its energetic bass rhythm from Alicia Gaines, and of course, the sparse but devastating roar from Charlie Landsman’s guitar. Rounding out the band’s immense power was the lead singer, Nadia Garofalo’s brilliant stage presence as she personified the gravity of the overall sound in her frenzied vocals and wild movement. Watching them play in basements at DIY shows, the Empty Bottle, and even the House of Blues, is to see a band in firm possession of its sound and one that is poised for greatness. They draw a crowd and leave behind an enthusiastic audience at each show. Their recent performance at the Empty Bottle assured their already fantastic reputation and to anyone interested in post-punk and especially in the local music scene, one can never go wrong with a Ganser show. While their EP, This Feels Like Living is fantastic, their live shows are always electric and should never be missed.

The last band, Silent Age, appeared onstage soon after Ganser finished their set. Another band cast in a post-punk mold, Silent Age is perhaps, one of Chicago’s best-kept secrets. I first encountered the band at a DIY show and noticed that it consisted of key figures from several major local bands. For instance, there was Brian Cundiff, the drummer from Ganser, on keyboards, the guitarist, Vinny Segretario from the electro-gothic duo the Wingtips, singer Patrick Donahoe from the synth-pop band CLAPS, and Benny Hernandez, an impresario of the Chicago punk scene and lead singer of Los Rumores on bass. Seeing them together in the dark, damp basement, I knew a super-group was forming before my very eyes and that their sound would be fucking lit. My suspicion proved true as soon as they tore into their set, with each song invoking the sound of the Cure, the Sound, Joy Division and whatever post-punk band I could think of.

When I saw them again, this time at the Empty Bottle on Thursday, I was eager to see their power on a greater stage. As the band roared through their set, their polished sound came together in a manner worthy of the parts of its sum. Segretario’s atmospheric guitar for instance matched the Hernandez’s driving bass and Julian Cabrera’s explosive drumming while Donahoe’s frantic and doleful voice rounded everything out. From their set, “Wall of Faces” proved to be the most memorable song with its rollicking melody and frantic tempo, reminding me of “Prove Me Wrong” by the Sound. Altogether, their music continued the energy set by Ganser, with much of the audience either fixed in place listening or on their feet dancing. Considering the talent of the musicians in the band and their explosive sound, it is therefore upsetting that Silent Age is not as well-known as other bands in Chicago. If on the hunt for a great local band, catch a Silent Age show. You will not be disappointed.

While the absence of Modern English could have derailed the show, their absence proved to be a blessing. The evening became a fantastic showcase for Ganser and Silent Age, two of the finest bands in Chicago. There were many people who walked into the Bottle on Thursday night, knowing nothing about these bands and walked out, stunned and enthusiastic. Altogether, it was a fantastic show and a reminder of how vibrant the music scene is. If given the opportunity of seeing either Ganser or Silent Age, take it. They are brilliant onstage.