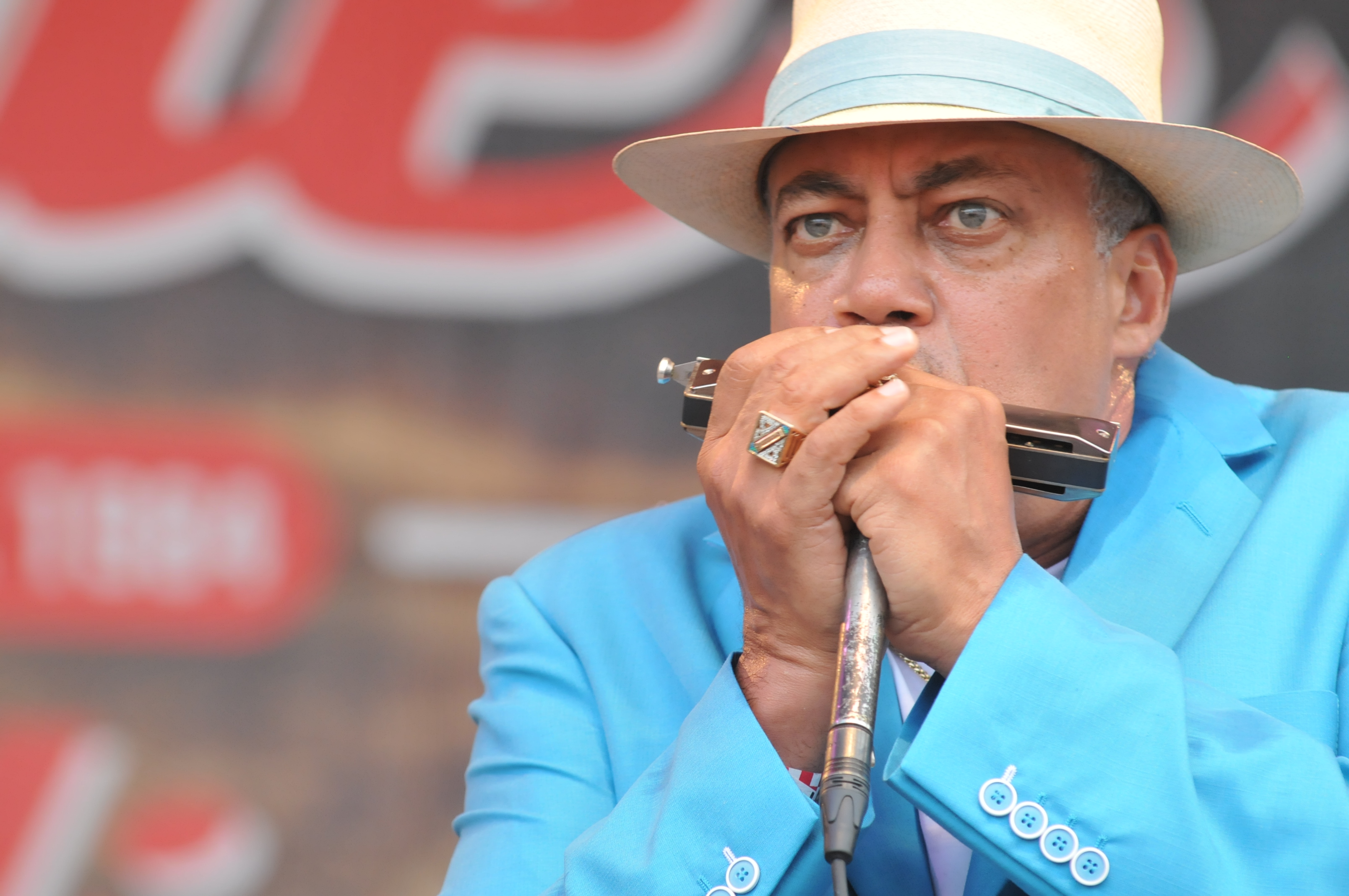 The City of Chicago is pleased to announce the full lineup of the 34th Annual Chicago Blues Festival happening June 9–11 in its new home in Millennium Park (201 E. Randolph St.) – the city’s premier outdoor music venue. In 2017, the festival is celebrating the influence of the urban blues with performances by the genre’s leading artists that include traditional blues, soul, R&B, hip hop and more on four stages and multiple entertainment areas in the park and throughout the city. For the complete Chicago Blues Festival schedule of artists and preview events and performances, visit chicagobluesfestival.us.

The festival headliners performing on the main stage at the Jay Pritzker Pavilion over the three days include: Billy Branch and the Sons of Blues, Rhymefest, John Primer and The Real Deal, Nellie “Tiger” Travis, William Bell, Gary Clark Jr., Rhiannon Giddens, Ronnie Baker Brooks and Theo Huff and the New Agenda Band. Performances at the Jay Pritzker Pavilion stage run from 5 to 9:30 p.m. each evening.

On opening night in Millennium Park on Friday, June 9, the festival will celebrate the 40th anniversary of Billy Branch and the Sons of Blues. For this special performance, blues harpist and three-time GRAMMY® Award-nominated artist Billy Branch is bringing together many of the artists who have been part of the band since the first 1977 performance in Berlin, Germany. The set will include a special tribute to the legendary harpist James Cotton who was a mentor to Branch.

GRAMMY® and Oscar Award-winning artist Che “Rhymefest” Smith will perform an opening night tribute to the influence that blues music has had on hip hop. During his set, he will be joined by Billy Branch. Rhymefest grew up on Chicago’s south side and in 2005, he won a GRAMMY® Award for co-writing the legendary hit record “Jesus Walks,” performed by longtime friend Kanye West. In 2015, Smith co-wrote “Glory” alongside John Legend and Common for the 2014 motion picture Selma which received the 2015 Academy Award for Best Original Song.

Two-time GRAMMY® Award-nominated artist and American blues legend John Primer and The Real Deal will kick off the evening’s performances. John Primer was the bandleader and guitarist for Muddy Waters, Willie Dixon and Magic Slim & The Teardrops. Primer’s personal accolades include a Lifetime Achievement Award that reflects his countless contributions to the history of Chicago blues.

The Festival is thrilled to welcome Stax legend and soul star William Bell, who is back on top with a 2017 GRAMMY® Award win for his album This is Where I Live, his first major release in four decades.  The renowned singer-songwriter was honored in 2016 with the Lifetime Achievement Award for Songwriting at the 15th Annual Americana Honors Awards Show and also inducted into the Memphis Music Hall of Fame.

Theo Huff and the New Agenda Band will bring their contemporary soul-blues style to the festival stage. Theo Huff began his career in musical theater productions, working with Ms. Jackie Taylor at the Black Ensemble Theater and his southern-soul sound was influenced by Bobby Rush, Tyrone Davis, Will Clayton and others.  This dynamic combination of talents establishes him as a blues artist on the rise.

Opening the evening’s performances is Mississippi native, Nellie “Tiger” Travis, a southern soul diva with a bold voice making her an undeniable force in the Chicago blues community. Early in her career, KoKo Taylor was a major influence, mentor and friend. Earlier this year she made her late night TV debut by performing her 2008 hit “Slap Yo’ Weave Off” on The Tonight Show with Jimmy Fallon.

Blues rock musician and Texas native Gary Clark Jr. will close the festival on Sunday evening with his electrifying energy and soulful sounds. Recently wowing at the 2017 GRAMMY® Awards with his performance with William Bell, he recently released a new live album Live/North America 2016 that features all new and unreleased live recordings including the songs “The Healing” and “My Baby’s Gone.”

Rhiannon Giddens last performed at the Chicago Blues Festival in 2014 with the Carolina Chocolate Drops. On February 24, her follow-up album Freedom Highway will be released, including nine original songs Giddens wrote or co-wrote along with a traditional song and two civil rights-era songs – “Birmingham Sunday” and the Staple Singers’ well-known single “Freedom Highway,” from which the album takes its name.  Chicago artist, Ronnie Baker Brooks will open the final evening with new material from his first release in 10 years, Times Have Changed, along with fan favorites.

The popular day stages contribute to the festival’s reputation as an internationally acclaimed event. Each stage features local and national blues musicians celebrating the genre’s rich tradition and heritage. Stages and performance times are: Budweiser Crossroads stage on the South Promenade, 11:15 a.m.–6:15 p.m.; the Mississippi Juke Joint stage on the North Promenade, 11:30 a.m.–7:30 p.m. and the Front Porch stage on the Harris Theater Rooftop, noon–5:15 p.m.

The Budweiser Crossroads stage will feature a lineup of local and national artists. On Friday, June 9, longtime Chicago blues vocalist Mary Lane and the No Static Blues Band will hit the stage at 12:45 p.m. and fans won’t want to miss the smooth blues of guitarist Guy King at 5:15 p.m. to close the day. On Saturday, June 10, Chicago Wind with Matthew Skoller and Deitra Farr will kick the day off at 11:15 a.m. with performances all day ending with a Southside Tribute to Killer Ray Allison with Joe Pratt & The Source One Band and JoJo Murray at 5:15 p.m. On Sunday, June 11, Wisconsin artists The Blues Disciples with special guests Ms. Erica Johnson and Milwaukee Slim start at 12:45 p.m. Rounding out the lineup on Sunday is the tiny body with the big voice, Melivia “Chick” Rodgers at 5:15 p.m.

The Mississippi Juke Joint stage kicks-off on Friday, June 9, with Blues in the Schools with Katherine Davis and Stone Academy at 11:30 a.m. Performances on opening day include Chicago blues artist, Jarekus Singleton at 4 p.m. followed by a jam session with Cedric Burnside at 5:30 p.m. On Saturday, June 10, at 2:30 p.m. Donda’s House and AARP presents Bridges to the Blues featuring original music inspired by Chicago blues music. The artists performing will be selected at a showcase on May 30 at the Chicago Cultural Center with Che “Rhymefest” Smith. At 5:30 p.m. the day’s finale is a one of a kind jam session with Kenny “Beedy Eyes” Smith. On Sunday, June 11, the day will begin with a panel discussion and tribute to blues aficionado, radio host and co-founder of Living Blues Magazine Amy Van Singel at 11:30 a.m., followed by a full day of the Delta blues.

The Front Porch will start each day at noon, and on Friday, June 9, highlights include Henry Gray and Bob Corritore at 2:45 p.m. and at 4:15 p.m. a Tribute to Barrelhouse Chuckfeaturing Billy Flynn, Johnny Iguana, Roosevelt Purifoy and Piano Willie OShawny. On Saturday, June 10, at 1:20 p.m, fans of Eddie Taylor, Sr. will enjoy a tribute to the bluesman by his son, Eddie Taylor, Jr. followed by the Jimmy Johnson Band at 2:45 p.m. The Como Mamas will bring their deep soul-gospel sound to the Porch on Sunday, June 11 at noon. The three friends from Como, Mississippi have been singing together since they were young girls at the Mt. Mariah Church. The stage will wrap up on the final day with Wallace Coleman at 4:15 p.m.

Leading up to the Chicago Blues Festival, during May and June, there will be several preview performances and film screenings at the Chicago Cultural Center (78 E. Washington St.) and at Daley Plaza (50 West Washintion). Nellie “Tiger” Travis performs on Monday, May 8, and The Mike Wheeler Band on Monday, May 15, at noon in the Chicago Cultural Center’s Randolph Square.  On Monday, May 22, at 6pm, there will be a special screening of Willie Dixon and the New Generation of Chicago Blues, followed on Monday, June 5, at 6pm, with a special screening of Sam Lay In Bluesland – both in the Chicago Cultural Center’s Claudia Cassidy Theater. The “official” Chicago Blues Festival preview on Daley Plaza will take place Monday, June 5, at noon featuring Chicago Wind with Matthew Skoller and Deitra Farr. For Complete details, visit chicagobluesfestival.us.

On Tuesday, May 30, from 5 to 9 p.m. in the Chicago Cultural Center’s Claudia Cassidy Theater, young musicians will take part in the Bridges to the Blues Showcase presented by Donda’s House and AARP – and featuring GRAMMY® and Oscar Award-winning artist Che “Rhymefest” Smith. Multigenerational artists will create original music – inspired by the Blues – for a chance to perform at the Chicago Blues Festival. For details, visit dondashouseinc.org.

Blues fans wanting to get up close and personal with artists won’t want to miss the Southwest Airlines® Blues Lounge. The lounge provides an area for festival goers to relax and listen to music and stories from the heart throughout the day from 11 a.m.–8 p.m.

The festival will also feature an entertainment programmed by the Blues Kids Foundation and the Windy City Blues Society. The Blues Kids Foundation area offers harmonica lessons and performances by the next generation of blues artists. The Windy City Blues Society, a festival favorite over the past few years, features an eclectic lineup of artists from Chicago and around the country.

For more complete details and festival schedule, please visit chicagobluesfestival.us, and join the conversation on Facebook (Chicago Blues Festival) and follow us on Twitter and Instagram @ChicagoDCASE (#ChicagoBluesFestival). To plan your trip to Chicago for the Blues Festival, visit choosechicago.com.