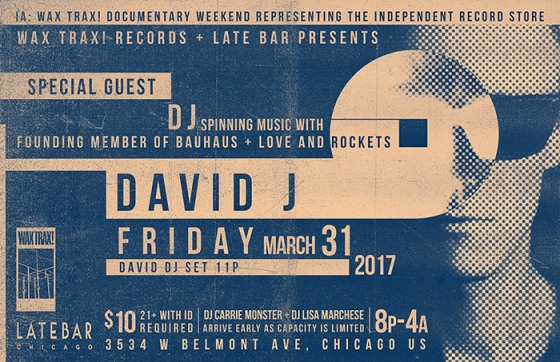 Like seeing the premier of the Wax Trax! Records Documentary isn’t good enough, the organizers keep adding more and more special events to make that Industrial weekend even greater.

They announced DJ sets from members of Front 242 will be spinning live at Berlin Nightclub and Jello Biafra at Liar’s Club for his incredibly Strange Dance Party, but now they ad an even more incredible event. A rare DJ set by founding member of Bauhaus and Love and Rockets, David J!

The weekend, slowly building it self up as the greatest resurgence of Chicago Industrial since it’s heyday, will know be filled with even more with the addition of David J.

Here is what the event organizers have to say about it all:

So it looks like our IA: Wax Trax! Documentary weekend here in Chicago is shaping up to be quite a mighty-nice event!

Tickets for the April 1st artist panels have been going fast and the VIP and Super VIP options sold out almost immediately. General Admission tickets are available here

But guess what?…Yep-In addition to the Saturday event at the Vic Theatre, we have yet another pretty bitchin’ add-on to launch the weekend for even more Wax Trax! awesomeness.

We thought we would bring in another important guest DJ that is important to the original Wax Trax! story and has the perfect lineage to represent the iconic Lincoln Ave store.

We are pleased to bring you Bauhaus and Love and Rockets founding member DAVID J for a special guest DJ night at Late Bar, Chicago.
Here is the skinny:

In case you are wondering what David J has to do with Wax Trax!…Well, I guess you’ll have to see the documentary
This special Friday event will will be the third guest DJ to properly launch the Wax Trax! event at the Vic Theatre on Saturday April 1.

In case you missed all the Friday night details to celebrate the Wax Trax! Documentary Weekend, here is what we’ve got:

WAX TRAX! RECORDS Presents
For one day only, Chicago’s WAX TRAX! RECORDS will present TWO separate panel
discussions + Q&A.
Panels will feature key artists, store and label staff. The discussions will examine the
upcoming Wax Trax! documentary as well as history of the independent record store
and label. Admission includes a limited Wax Trax! Records poster, produced and
available for this one day event.
To mark this one time special gathering, FREE admission to a private cast and crew
test screening for the upcoming WAX TRAX! Documentary, INDUSTRIAL ACCIDENT:
The Story of Wax Trax! Records, will be given out with every panel ticket. The private
test screenings will run immediately BEFORE each panel Q&A. Tickets here

Discussion panels will peel back the inner layers of the independent Chicago record
store and label as well as explore the process of filming the upcoming WAX TRAX!
documentary.

Please note: A test screening is a valuable tool to gain additional feedback and help
adjust the film before it is released publicly. We will have an online questionnaire for
anyone attending the test-screening in order to collect a proper critique.

Hope to see you there!