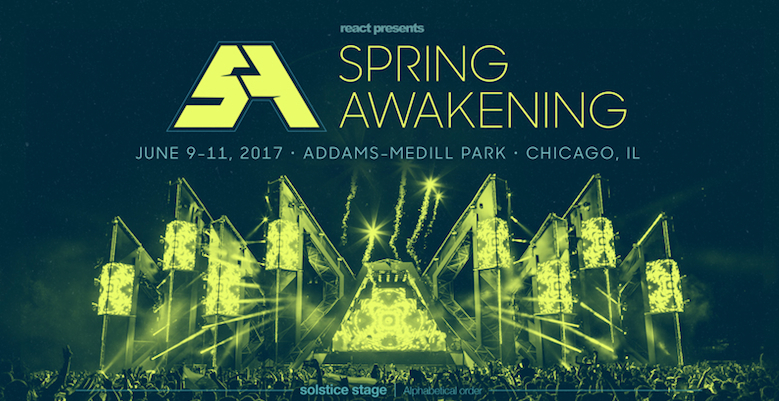 March 17, 2017  –  Spring Awakening Music Festival (SAMF) is thrilled to release the full 2017 lineup, including artists playing on each of the six Branded Stages, the day-by-day breakdown and a limited supply of single day tickets! Over 80 artists will perform across five unique stages, demonstrating a dynamic variety of genres within the electronic music spectrum.

In addition to Phase 1 and Phase 2 artists performing on SAMF’s two Main Stages, the three-day festival will also feature two Branded Stage takeovers each day. On Friday, June 9, the first two Branded Stages will be hosted by acclaimed music publicationDancing Astronaut and React’s simmering house event series, Body Language. Headlining Dancing Astronaut’s takeover will be one of dance music’s most celebrated artists Benny Benassi. Alongside him, Sander van Doorn, Bingo Players, Audien andParty Favor are all set to unleash from the stage. Meanwhile, fans of the Body Languageseries will get down to a diverse assortment of artists with a headlining performance byThomas Jack, the saxophone-playing champion of tropical house, along with Route 94,Felix Da Housecat, Billy Kenny and Gene Farris.

Saturday, June 10 will see SAMF’s Branded Stages transformed by Above & Beyond’s smooth and sultry deep house imprint Anjunadeep and the return of React’s veteranTrance Arena series, featuring its own euphoric atmosphere. The Anjunadeep stage will feature a headlining guest spot by RÜFÜS DU SOL, one of the hottest indie dance groups out of Australia. Joining RÜFÜS will be Anjunadeep labelmates Lane 8, Moon Boots, Jody Wisternoff and Yotto. Leading the Trance Arena stage will be legendary Grammy Award-Winning DJ, producer and musician, Paul van Dyk. Alongside him, Paul Oakenfold, Andrew Rayel and MaRLo will mesmerize fans with nonstop melodic thrills throughout the day. The Trance Arena will also be graced by a very special guest appearance, which will be revealed in the coming weeks.

Topping off the weekend on Sunday, June 11 will be hosted takeovers from React’s longstanding Bass Kitchen series, known for its unmistakably brutal bass carnage, andSunday School, a longstanding series known for its “festival within a festival” atmosphere. Headlining the Bass Kitchen’s takeover will be an undisputed member of the Mount Rushmore of modern dubstep, Snails, backed by a staggering roster of additional talent including Kill The Noise, Hucci, Spag Heddy and Barely Alive. Over on theSunday School stage, the action will be headlined by famed North London duo Gorgon City, as they return to Chicago for a raucous set for all to enjoy. Rounding out the stage’s roster will be Eats Everything, Victor Calderone, Steve Bug, and J. Phlip.

Check Out The Full Single Day Lineup For SAMF 2017 HERE.

Single Day, 3-Day and VIP tickets are now on sale at springawakeningfestival.com!

The 2017 edition of Spring Awakening Music Festival takes place June 9 through 11 at the beautiful Addams/Medill Park. Don’t miss a beat and follow Spring Awakening onFacebook and Twitter for the latest news and announcements.