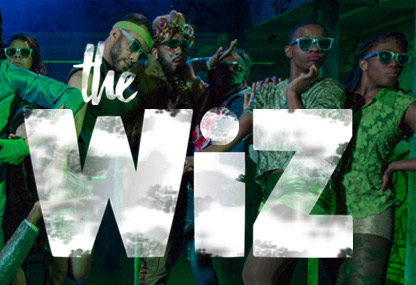 In a short essay accompanying the show’s playbill, Lili-Anne Brown – the director of Kokandy Production’s staging of ‘The Wiz’ at Theater Wit – writes of how as a child, she saw a touring production of the original broadway show at Arie Crown Theatre, and that although she “loved the songs, the costumes, the dancing, and seeing a little girl who looked a lot like me at the center of it all,” the musical did not quite click for her. The 1978 movie, though – which starred Diana Ross and Michael Jackson, and replaced the fantastical sets of the Broadway show with a grimy, overcast urban landscape – was a different story. “The key to the story that the movie unlocked for me was that they’d simply set it in A CITY,” Brown writes. “As a girl from the South Side of Chicago, this was something I could relate to – scary train tunnels, weird street vendors and all.”

Brown later writes of how Kokandy’s production attempts to make ‘The Wiz’ relevant to a modern Chicago audience, but it’s precisely the show’s attempts at social commentary that ultimately hampers its success as a musical, though it retains many admirable and recommended qualities.

Set in the fictional Kansas Homes housing project in Chicago, ‘The Wiz’ does not stray much from its source material: Dorothy (Sydney Charles) is swept away by a storm to the land of Oz, where she inadvertently flattens the Wicked Witch of the East. After being informed by Addaperle, the Good Witch of the North (Angela Alise) of an all-powerful wizard who can transport her back to her beloved Chicago, Dorothy sets off on the yellow brick road, meeting a scarecrow, a tin man, and a lion along the way.

There are some problems with ‘The Wiz’ as a musical – William F. Brown’s book is weak, and the pacing is a tad inconsistent – but Kokandy’s terrific ensemble more than overcomes those minor shortcomings. As Dorothy, Charles is plucky and likable, with a big, powerful voice that soars through Charlie Smalls’ songs. Alise is utterly delightful as Addaperle. And Gilbert Domally, Chuckie Benson, Frederick Harris, and Nicole Michelle Haskins are very entertaining as the Scarecrow, Lion, Wiz, and Evillene (the Wicked Witch of the West). Additionally, Virginia Varland’s costume design is first rate, and Breon Arzell’s choreography (especially during “Everybody Rejoice”) is engaging.

But in the end, Brown’s stabs at social commentary do not quite hit their mark, and for one simple reason – Smalls’ songs do not reinforce them. Although it’s interesting costuming the Scarecrow as a corner boy and the Lion as a fledgling pimp, to say nothing of Arnel Sanciano’s ambitious set (which recreates a graffiti strewn housing project), the generalized positivity of the show’s songs do not meet the production halfway, and the result is a somewhat awkward fit.

Still, there are many positive elements of ‘The Wiz,’ and I recommend it heartily.