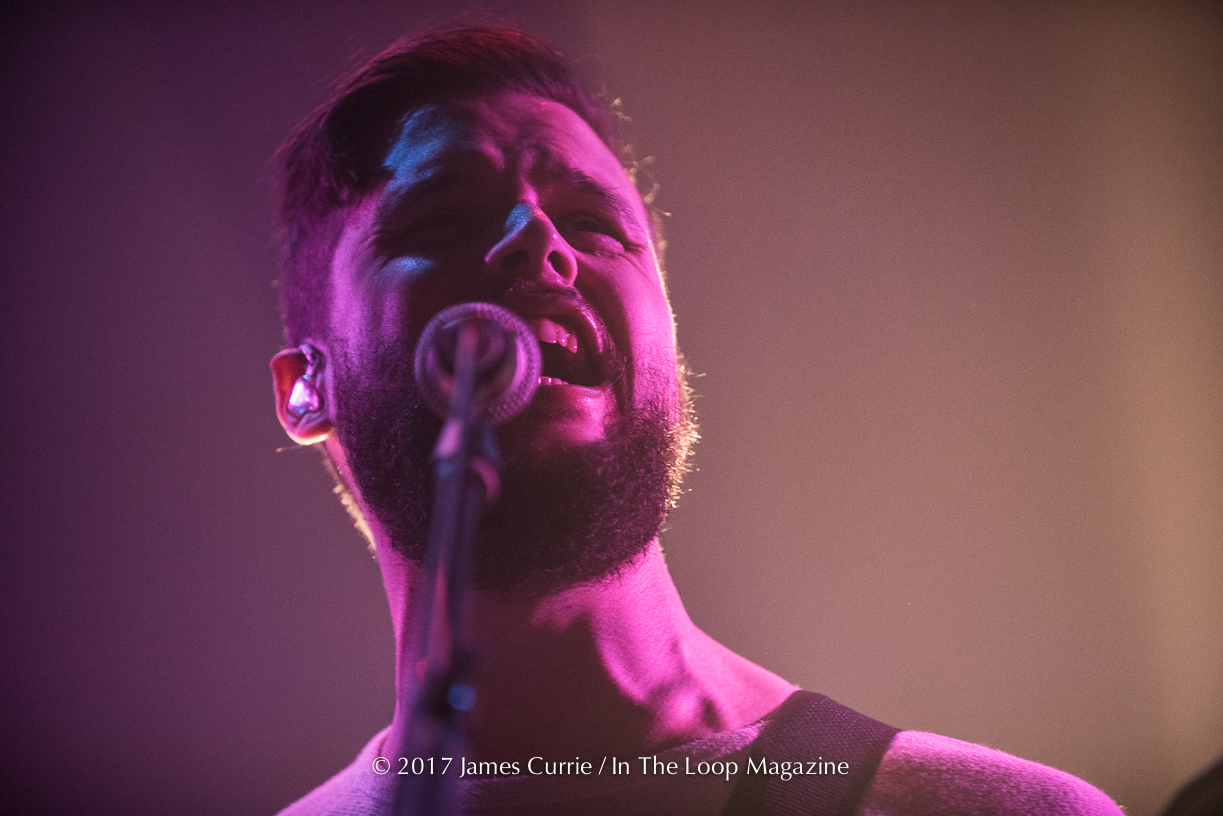 Ever since I started exploring the music scene here in Chicago, it seems post-punk music has been enjoying a tremendous resurgence. A few months ago, Echo and the Bunnymen played a sold-out show at the Metro and just recently, Adam Ant made a grand appearance at the Vic. However, this past Monday another shining post-punk band, White Lies, returned to Chicago after three years of touring and the release of two albums, 2013’s Big TV and 2016’s Friends. During that time, the band’s stature as the best current post-punk band has grown considerably after headlining a number of festivals around the world, making their appearance at Lincoln Hall therefore even more exciting.

Before taking the stage, the post-punk revivalists were joined by another outfit of the same caliber, an Australian duo called Vowws. Opening the show with their own-brand of stripped-down gothic post-punk, Vowws proved to be immensely capable of drawing the audience with their heavy industrial beats and sparse instrumentation off their Great Sun LP. While their music for the most part was a pleasant surprise having never heard of them before, I couldn’t help but notice how derivative the band sounded as their music seemed no different from the glut of other stripped-down bands such as Black Marble and Iska Dhaaf. Each song seemed to be an offshoot of a generic heavy beat, reaching a point where I could not remember anything from their set that made me want to go back for another listen. Nevertheless, what I felt they lacked in their music, they made up for in their character as they joked often with the audience and poked fun at each other between songs. Altogether, Vowws played well, keeping the audience interested.

When White Lies entered the stage in a haze of dark blue light, for me it was the culmination of four years of being a fan. I began following the band after hearing about them from a strange man with whom I unloaded trucks at a Macys near my house. He went to Lollapalooza in 2012 intending to see the Naked and the Famous. Instead of that band, he came back with only the name “White Lies” on his mind and their masterpiece, “Bigger Than Us” on his lips. From that point on, I dove right into their two albums, To Lose My Life and Ritual. I remember driving everybody on my dorm floor in college nuts with all the White Lies music I played. Moving forward to this past Monday night, I found myself on the brink of realizing a dream I nursed for quite a long time, seeing White Lies and being in Chicago. White Lies onstage, to put it bluntly, were brilliant.

Their set list covered the best of their four-album discography and could not have been better. The band began with “Take It Out on Me”, the latest single off of Friends, and then touched on material culled primarily from their first, third and fourth albums. While their most recent material leans towards a more pop-oriented sound compared to the post-punk sound from their first album To Lose My Life, the band nevertheless stormed Lincoln Hall with energy and stamina. Songs such as “Place to Hide” and “Fairground”, oldies from their repertoire, were brought to new life by Harry McVeigh’s soaring vocals and the thunderous sound from the rest of band. Every song flowed effortlessly into the next until everybody in the packed venue fell under their spell and began moving their feet. More importantly, White Lies, looked like they were having fun onstage and frequently got the audience clapping along to their music. The passion on display coupled with their intense energy, even forgoing the break before their encore, was proof of a band dedicated to their craft and to the audience. However, the only small gripe I had with the set was the omission of the song “Is Love” from Ritual, my personal favorite as it shows the band at their most explosive and electric. However, White Lies mollified my trifle by closing their set with a wonderfully deafening rendition of “Bigger Than Us”, their aforementioned masterpiece. At the end of their set, they left Lincoln Hall filled with a tremendously satisfied crowd, young and old, old fan and new fan alike.

In the end, I find it difficult to describe the sound of White Lies since they take after traditional post-punk conventions in their lyrics and arrangements, but combine everything in a manner that makes them appeal to a broad audience. Listening to White Lies at Lincoln Hall, I heard shades of Adrian Borland in their energy and intensity, while their lean sound reminded me of the Chameleons. But altogether, the band is in a class all their own due to McVeigh’s operatic vocals buoyed by sharp, explosive music. Nevertheless, if in the mood for a new band to listen to, one that grabs one’s ears and never lets go, then White Lies would be the band to follow. Their thunderous performance at Lincoln Hall, along with Vowws, was one to remember and a sign that Post-Punk is alive and well in Chicago. When they come back here I urge everyone to go see them.

For more on White Lies including current tour, click here

For photos from the Lincoln Hall performance, click here

Congrats to Grammy Award Winner, Chance The Rapper Pepper Season Up The Concord With Wild Island Flare And Special Guests