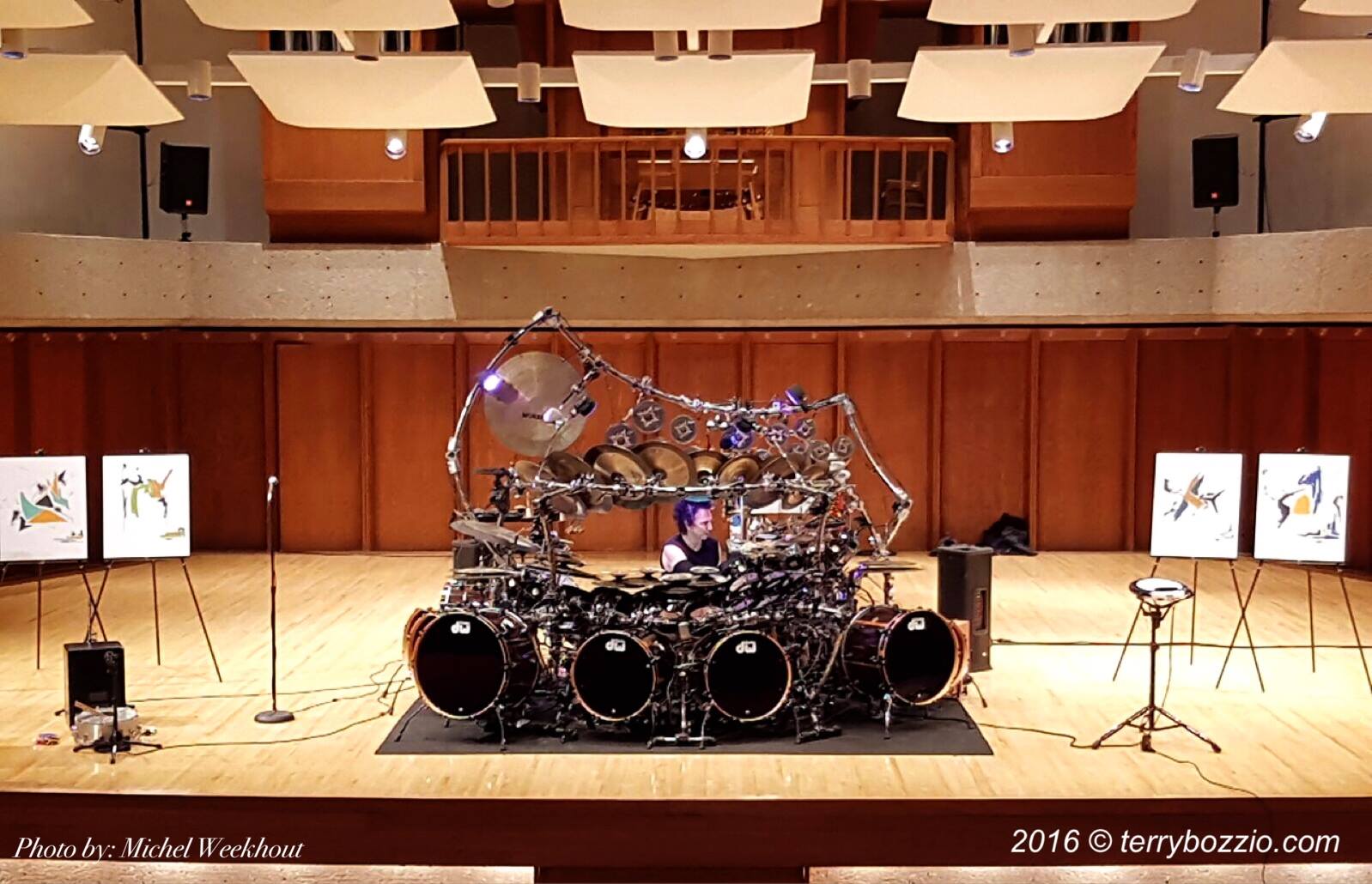 Terry Bozzio took the stage last night at City Winery behind his massive, beautiful amazingly engineered Drummer’s Workshop kit. A throne he has created in order to push the boundaries of traditional compositions behind the drums. On this one, massive instrument Bozzio was able to create ominous bell sounds one might suspect could only come from a keyboard. He presented a perfect forgery of piano and drums.

Terry Bozzio is a drummer that nearly every other drummer knows of. Even non-drummers may very well be familiar with Bozzio’s unique approach to composition. After spending time working with Frank Zappa, Jeff Beck, KoRn, Missing Persons and Mick Jagger (just to name a few) partnered with a very successful clinic history, it is easy to see why. Not to mention his famously large drum set.

Bozzio is currently on tour throughout the U.S. promoting his most recent release titled, The Composer Series, which was released on Ward Records, who is based out of Japan. The larger catalogue of new music spans everything from jazz to classical compositions, to ambient calculated music and more. His stop here at City Winery included a wide range of music consisting of complete pieces he’d written from behind the drum set. Additionally he displayed on stage his personal artwork he created for the Composer Series.

Bozzio took a few minutes to explain some of the instruments he was playing that were not attached to his drum kit including his Hello Kitty jingle bells he purchased at a Japanese dollar store and his digital Wave Drum. He even took a minute to play some complex rhythms and melodies on a thumb piano. It was very intriguing to see someone captivate an entire audience by only using percussion instruments. Not only that, but his drum kit is bigger than nearly every other drummers full set and yet the overall volume of his performance was very pleasing and easy to hear (no ear plugs needed). The crowd also enjoyed his verbally explaining of a song called, ‘5 = 7’ by playing the polyrhythms on his lap while counting out loud. Laughs filled the quite and attentive venue as most of us shook our heads in wonderment. He made it seem so easy stating, “It’s really not that hard, it’s just one, two three, four, five…”. Leaving the room to a collective sigh.

Near the end of the show, Bozzio exclaimed, “Music is a metaphor for the very universe we find ourselves in”. He spoke of the connections between frequencies emitted at certain vibrations and how they interact with each other in the world. His performance resembled his deep connection to rhythm and vibration and was a clear message to the many, many drummers in the audience. A message of belief that anyone can accomplish their goals. Bozzio is a one of a kind composer who everyone should see live at least once in their lives. Especially if you are a drummer. Do yourself a favor and go get schooled.

For more on Terry Bozzio and the current tour, click here