Nylon Nights Lollapalooza After Party Kicks It All Off 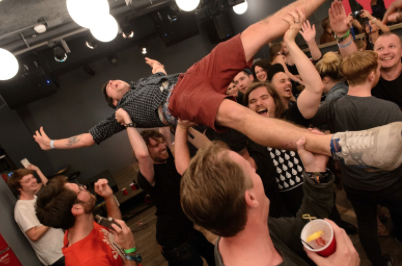 On the first night of the fully anticipated Lollapalooza weekend here in Chicago, “Nylon” magazine hosted one of the first after parties to kick off the weekend. The event took place on the 25th floor inside the beautiful Virgin Hotel.

“Nylon” magazine hosted the night, with special sponsorship help from Stillhouse whiskey. The night consisted of some hot celeb appearances, such as the members from Bastille to fashion icon John Varvatos, Lotti Benardout of Haelos, and Elena Tonra of the band Daughter.

Not to mention the guys from Bastille being the life of the party the whole night, showing off their skilled dance moves, to ending the night with a pretty lengthy conga line. The night kicked off with special performances from Haelos, Dupa Lipa, Jarryd James and Leslie Kirchhoff.

The band Haelos who originated from east London gave us an electrifying intimate set, from songs off of their recently debuted album Full Circle.

20 year old Dupa Lipa, gave us a small taste of what she has in store for us for her anticipated self titled album, being released in february of next year. The aussie native Jarryd James, took everyone’s attention once he began singing, his soft spoken words with melodic hymns following soon after. Leslie was the last one on stage that night rounding up the party on the turntables, offering her unique twist to her choice of laid back disco friendly tunes, making it a perfect track list for summer.

A huge thanks over to the Stillhouse crew for keeping us refreshed the entire night with their 80 proof whiskey, and uniquely red shaped flask bottles. I personally could not resist taking an empty bottle home to be put up for decoration. Stillhouse provided us with endless samples of all of their tasteful whiskey flavors, and a few special summertime cocktails, from infused flavors such as the Original Stillhouse whiskey to Peach Tree, Mint Chip, Red Hot, Coconut, and Apple Crisp whiskey flavor, which only kept us craving for more and going back over to the bar.

Stillhouse also provided us with an interactive photo booth, where one could pose and create GIFS and were then able to posted on various social media sites with the help of Ipads.

Kyle Simmons of Bastille was defiantly one of the few who were seen as the life of the party, dancing all night long. On the night of July 28th 2016.

Bastille band members Kyle Simmons and Chris Wood are seen here hugging it out after a night of splendid partying.

Just some of Thursdays nights guests. The crowd enjoying the tunes of Leslie Kirchhoff.

Leslie Kirchhoff Mixing the night away with her groovy tunes.

There was even crowd surfing involved with the help from the members of Bastille.