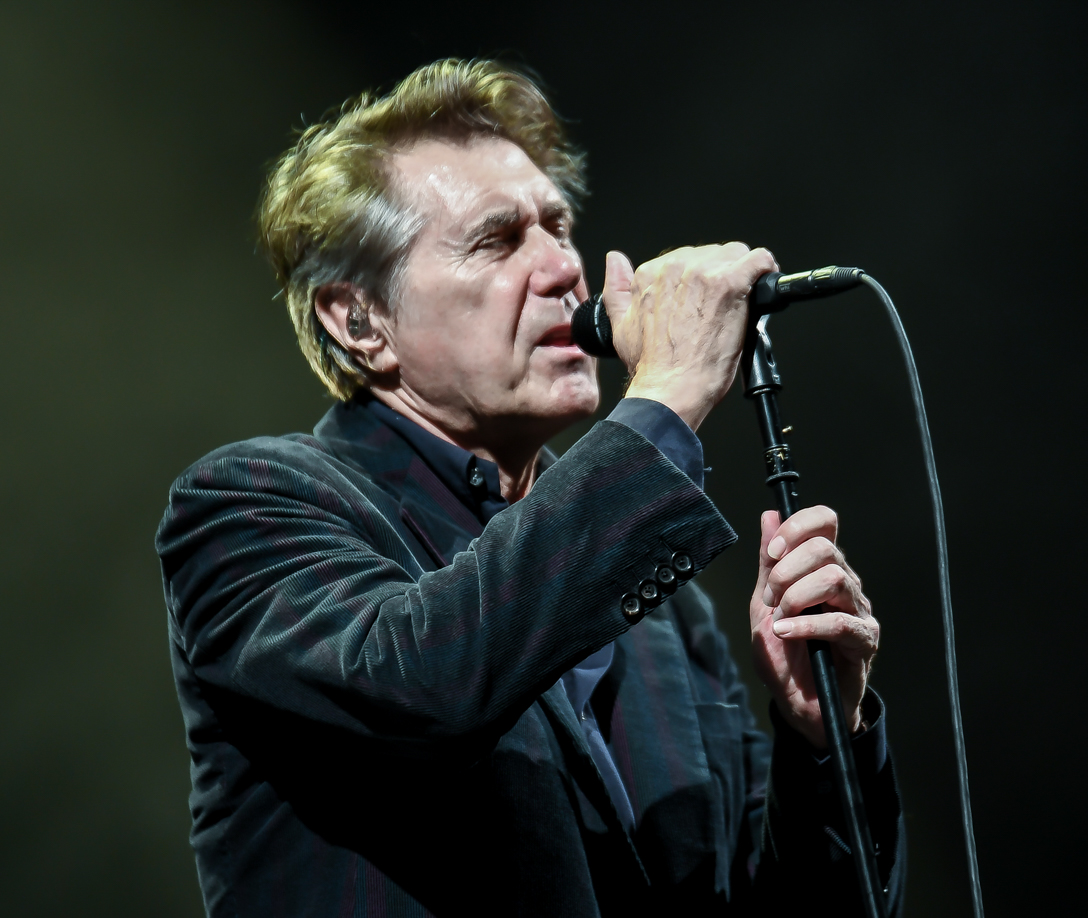 The ever so dapper, the ever so elegant Bryan Ferry played last Saturday at Ravinia in Highland Park as part of his current North American Tour to support his latest release- “Avonmore”.

As the sartorially debonair front- man of Roxy Music, Bryan Ferry’s rich vocal and ultra stylish songs have become as iconic as the man himself, with themes that invoke hopeless romance and neo futurism, with a sly and witty sense of humor running through them.

It was billed as a Bryan Ferry concert, but it was also for all intents and purposes a lavish Roxy Music show in the 25 song setlist. And no one in the nearly sold out crowd would tell you there was anything wrong with that.

I found it odd that for most of the show, everyone remained politely seated in the pavilion – up at least ’till the song Avalon. So many people left there seats to dance in the aisles during the sexy and rich gentle swing that the song provides.

Fifteen of the night’s 25 songs hailed from what Ferry referred to as “the mysterious part of Roxy Music”, from the big hits “Love is the Drug”, “Virginia Plain”, More Than This”, and of course the above mentioned “Avalon”, to some deep cuts that were very enthralling to hear again. Ferry’s band delivered those, and the rest of the evening’s song selection, with all the sophisticated panache and texture they required.

Bryan Ferry, playing occasional Fender Rhodes piano and a stint with his harmonica on the Bob Dylan cover “Don’t Think Twice, It’s All Right”, fronted the talented musicians with his usual understated elegance and a suave ultra cool assurance that fits his relaxed attire of dark striped sports coat and slacks with an open collar shirt.

Ferry’s voice was never understated or buried in the mix, which happens at some outdoor sheds. The ever elegant Ravinia Pavilion is meant for orchestras, and it makes it that much better of a listening room for the audio hound who’s seated to hear what true live productions should sound like.

Ferry’s solo career didn’t take a back seat either as he offered up high points on songs such as “Driving Me Wild”, the iconic “Slave To Love”, “Don’t Stop The Dance”, and of course “Bete Noire”. One of the highlights for me was the undeniably macabre charm of “In Every Dream Home A Heartache”, a song which Mr. Ferry on his previous two tours decided not to play.

Bathed in a rich dark green light, at his keyboard, ever so patient with the lyrics and their meaning; the song is a sinister monologue, part critique of the emptiness of opulence, and partly a love song to an inflatable doll- who- of course- doesn’t talk back.

The whole show had a pattern of precision and excellence. A frenetic “Do The Strand” and a propulsive “Both Ends Burning” provided a super strong closing, however, and as the ebullient crowd left the Ravinia Pavilion its warm glow of nostalgia was fortified by the proof that Ferry has remained strong though all these past few years.

For a guy who’s 70: Ferry stands in a league of his own. Never dated, never understated. Would he be just as cool performing when 80? But of course.