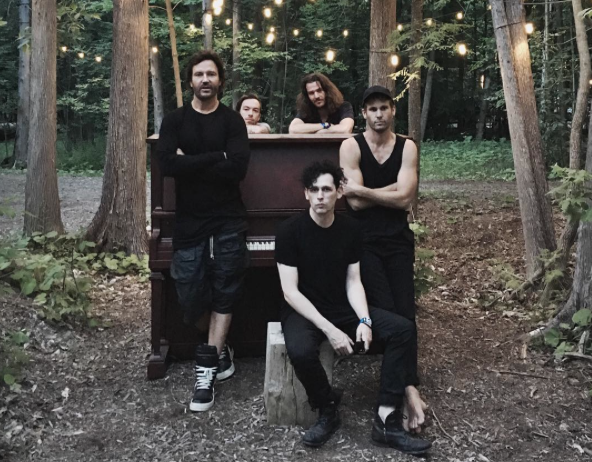 On the third night of Lollapalooza’s 25th anniversary after parties, Third Eye Blind and DREAMERS sold out their first show out of two that weekend. Saturday’s night spectacle was no regular performance for Third Eye Blind drummer Brad Hargreaves, as he decided there was no better way to celebrate his 45th birthday with us, than to play a sold out show.

Opening the show was a band from Los Angeles called, DREAMERS. They are a solid rock band that got noticed when the struct the first chord to the last. They will be releasing their debut full-length album titled, “The Album Does Not Exist” on August 26 via Farifax Recordings (formerly Sound City Studios). DREAMERS also recently filmed a live concert performance in Austin, TX called, “DREAMERS: Live from Austin”. DREAMERS will be playing Lollapalooza as well on Sunday July 31st. You can catch a clip from the Texas performance below.

Saturday night was the precursor to Third Eye Blinds long anticipated show on the Lollapalooza stage.

It’s uncommon for us to hear rock bands staying together for more than a few years, but Third Eye Blind has shown us otherwise. It’s impressive to hear and know they are still together after 20 plus years, and show no intentions of breaking up. As a matter of fact, they recently released a new title, “Dopamine”, from Mega Collider records.

Upon entering Park West, the main floor was a sea of tightly packed Third Eye Blind fans. Some making their way towards the center of the stage, others were migrating towards the bars set up on the outsides of the main floor, making it hard to find a good area to stand and watch the performance.

As a part of the audience that night, I surely wasn’t expecting Jenkins to say they had something special planned out for us. He and the band had planned to give us an unforgettable show, filled with a mixture of songs they rarely ever perform such as “Never Let You Go”, “Dopamine” and “How’s it Going to be”. Jenkins played a few acoustic songs sounding so crisp, that they felt as if they were playbacks off recordings. The crowd was singing along to their entire set, hanging on to every single word Jenkins sang, loving every single moment.

The most memorable moment of the night, for myself was listening to the band play…“How’s It Going To Be”. The crowd went wild, becoming one as everyone was in tune singing along. I even spotted a few people swaying back and forth.

I especially loved Stephan’s shirt I must add, that was quite a statement. I must find out where he came across it. Other highlights of the night also include how the band was in tune the whole night. I rarely remember hearing the speaker levels peaking at all. Big shout out to the live sound guys that night, you guys did an amazing job!

Third Eye Blind’s spectacular performance last Saturday night became one of my best experiences thus far, a concert experience that will surely be hard to top!

For more on Third Eye Blind, including a return to Chicago this fall, click here