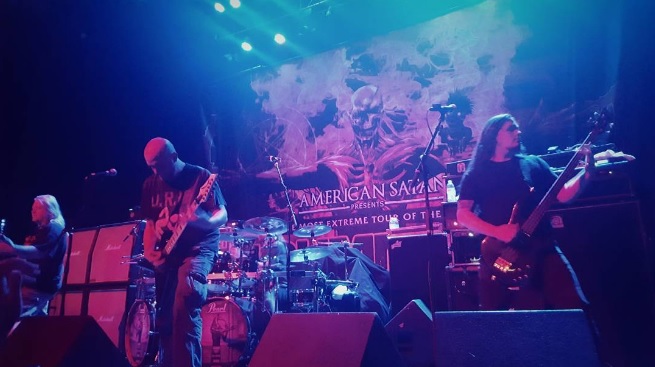 Festivals tend to come and go and while some dissipate after having its run, other festivals continue to grow and become stronger. What has consistently been the most brutal and ferocious festival of it’s kind in the US, The Summer Slaughter Tour has been delivering more than its fair share of metal for many years now. In fact, this was the 10th anniversary of the festival, a decade of Summer Slaughter, proving that not only are the fans continuously supportive of the scene but that the genre is alive as ever.

This year’s lineup was bigger than the most recent years as many big names in addition to up and comers gave it their all in what is dubbed as “The Most Extreme Tour Of The Year” and indeed it has lived up to it’s name. Originally, the festival boasted purely death, deathcore and technical metal acts but throughout the years, the festival has given leeway to a handful of bands outside their staple genres. Fans don’t need to fret as the festival as always and most likely will remain as extreme as ever, as long as the scene continues to thrive and live on.

Featured at the festival this year were Brazilians, Krisuin, East coast metallers, Suffocation, Revocation and Nile, west coast metallers, Carnifex, out of the midwest, After the Burial and lastly but certainly not least, headlining the entire tour, death metal titans and legends, Cannibal Corpse. In addition to extreme music at the Concord Music Hall, the scorching heat beating down on the Chicago masses added more extremity, a combination for a brutal festival in all senses and aspects.

Opening the festival that afternoon was Enterprise Earth. The venue had yet to be filled by this point but the group did a decent job of getting the day started. One of the up and comers in the extreme metal scene, the crowd surely appeared to have enjoyed some raw and young talent. Proceeding thereafter, Ingested and Slaughter to Prevail wasted no time in taking the stage in order to make an impact on the Chicago crowd. What was perceived initially as an opening act certainly deserved a headlining credit.

Ingested created such an intense atmosphere in the limited time they had. The UK Slam metallers only had time to perform 4 tracks but boy were they bombastic, of course a smart move from the band to give it their all in only 4 songs, what a performance. The group ended their set list with two tracks titled Skinned and Fucked. It is highly recommended to check this band out next time they swing by Chicago again, I was left wanting more.

Revocation all around gave a solid and whopping performance. Each member executed their skills with such tenacity, their delivery was pure gold. Not only was their delivery astounding but their live sound was mastered with near perfection, it’s not everyday a metal band delivers memorable live sound. Promoting their recently released album, Great Is Our Sin, it was a risky move but each note was played in metal bliss, while lead man David Davidson has some prime talent backing him up. Ending their set list was the track, Crumbling Imperium, a wise choice to end it all that night with each instrument heard precisely, there was no overbearance of anything. A performance certainly worth an encore.

What was easily one of the most memorable performances of the night, San Diego deathcore quintet, Carnifex, left many feeling satisfied as majority of the shirts worn by the fans that night was in support of them. With Scott Lewis at the helm, his performance was very emotional, in the sense that he truly felt the power of the music in full extremity that night. His confidence in controlling the stage was easily seen and felt. The most effective song that night was Hell Chose Me. The crowd went belligerent and sung the song in almost perfect unison. This was one of those moments that just covers your body in pure goosebumps.

Overall, I felt they gave one of the best performances of the night, if not the best. The confidence, energy, charisma and stage presence all intertwined for Carnifex which upon after ending their set, fans still screamed for more even though they knew that was it. The fans appeared to be the most dedicated as well, with older tracks like Die Without Hope and one of their early works, Lie To My Face, fans still supported each and every track. What dedication!

Another solid performance came from long-time New York metallers and legends, Suffocation. Of course being in the industry for nearly three decades now, their support is still unfathomable. The most memorable moment for the group was when they played the track, Jesus Wept. Nothing but a blitzkrieg and terrorizing track, guitarist Terrance Hobbs just wailed on that thing. I was in awe in his performance on the guitar, just pure talent and amazement, I was hypnotized. If that wasn’t enough, drummer Kevin Talley, just beat the hell out of those drums and made it so effortlessly looking.

South Carolina tech death metal long-timers, Nile also gave one of the most memorable performances. In fact, the best drum performance of the night was brought forth by George Kollias. He’s got the fastest feet in all of death metal, just those blast beats and double bass left me in pure shock. Whatever you do, just don’t blink or you may miss something. After witnessing the guitar performance from Nile, there was no denying that they are the masters in the industry.

After that night, I solidified my opinion that they are the guitar legends of the scene, quite a bold statement to make huh. The devious and insane axework, crisp and above all, heavy to the core, this was it. When they played the track, Evil To Cast Out Evil, the Chicago crowd went absolutely nuts. A fan-favorite, the track speaks of an evil God that other evil Gods are afraid of, talk about evil! Overall, Nile have not lost any traction and continue to remain at the top of the competition.

Last but certainly not least, death metal legends and titans, the most famous name in the death metal industry, Cannibal Corpse took the stage and easily drew the most attention from all the acts, not surprisingly. Of course one of the best performances of the night, the legends spent the most time on the stage. 18 songs, triple to that of any of the other acts of the night. A well-rounded set list from the titans, every track delivered had such ferocity, especially from the main man himself, George “Corpsegrinder” Fisher. Every track they performed from I Cum Blood to Scourge of Iron to their signature Hammer Smashed Face, there were smiles and horns thrown from almost every fan, it felt like a metal legion was taking place.

Corpsegrinder decimated and dominated the stage with his signature thick-necked headbang and at times got even humorous and comical, showing that not everything needs to be serious. He knows the crowd loves him and he gives everything he has at every show, let alone this night as well. Bassist and longtime original member, Alex Webster, shreds and plays furiously on that bass. He deserved an award for best bass performance hands down. Ending the night on an intense note was the track, Devoured By Vermin.

All in all, this was the most intense show one could ever attend. From the first notes to the last, each act offered something different and although each act has extreme elements, each band did not sound like one another. What continues to prove to be the most extreme festival in the world, you surely do not want to miss out on next year’s stop if you truly want to experience metal at it’s most finite extremity.