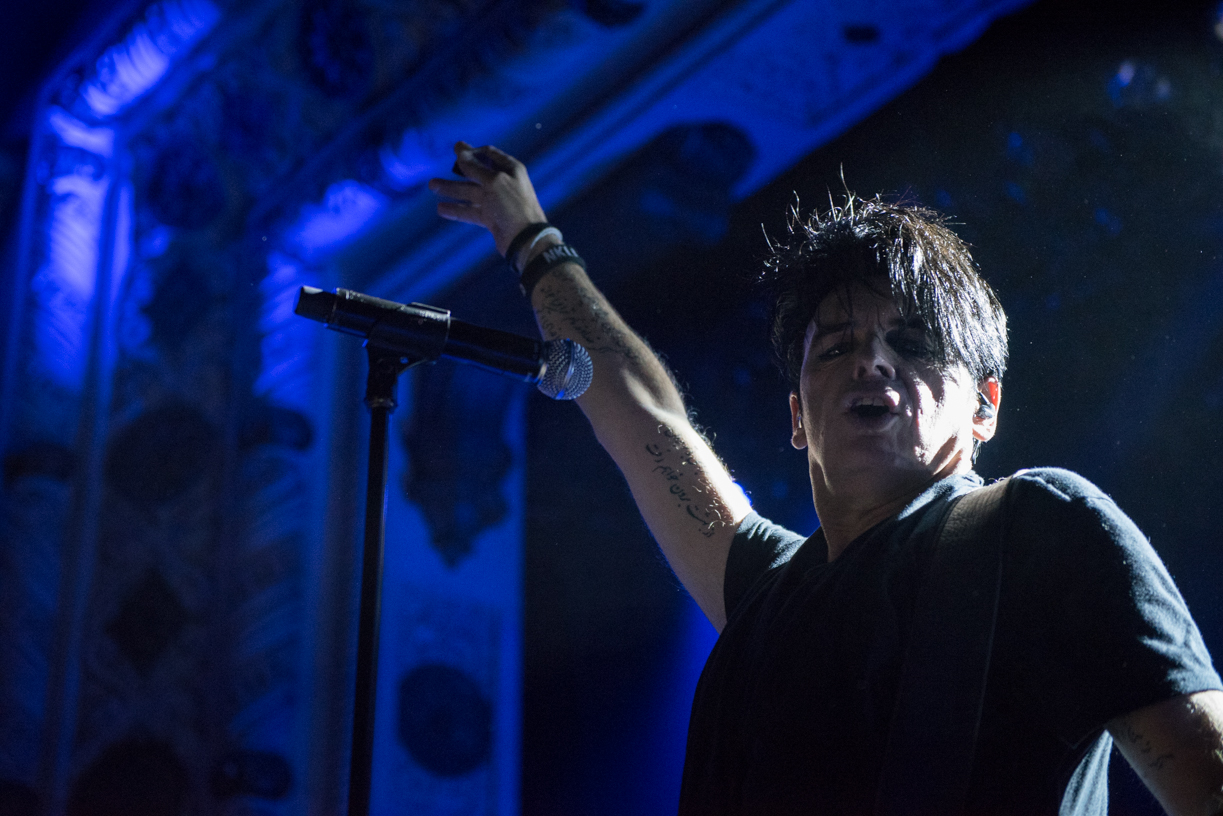 The trend of playing albums in their entirety is the stuff of dreams for the rabid music fan; it would be impossible for me to even think of all the times in my life when I’ve thought, upon entering a venue, I wish they’d just play the whole record. Seeing songs live has always given them a special kind of legitimacy in my eyes, so the whole concept of a top-to-bottom live set—a relatively new one—is more than cool with me.

It’s a rare opportunity, though, to see a truly legendary artist revisit an entire era live. That opportunity presented itself when the one and only Gary Numan, the godfather of modern electronic music, landed at the Metro for a three-night stand that saw the classic “machine” trilogy performed in its entirety on respective nights: 1979’s Replicas, its immediate follow-up The Pleasure Principle, and 1980’s Telekon.

Replicas led the charge, offering up an immediate platter of hook-drenched classics. “Down in the Park,” “Me, I Disconnect From You,” and “Are Friends Electric” all followed the title track which began as slow-burner intro music and slithered into the full-band album arrangement. One of the more interesting elements of the residency was that no record was played in sequential order—the setlist was structured to fit a live environment, which presented an interesting angle on the material. There was no phoning in of album cuts just because they happened to be on an album; every song had its place. This worked particularly well for Replicas, allowing for some of the lesser-known and just as catchy album tracks to find a comfortable and well-received home among the more widely-known tunes.

Five minutes into the first night’s set, and it was clear that overstating Numan’s importance to modern electronic rock would be impossible. Clad entirely in black, his lithe stage movements, commanding and confident as the crowd shouted along with the songs, called to mind everyone from David Bowie before him to Trent Reznor and Marilyn Manson after him. Synth textures wove in and out of undeniable hooks, and indeed, watching the five-piece band roar through the bouncing riffs of “The Machman” and the driving, mechanized pulse of “I Nearly Married A Human,” you could practically see the entire landscape of 1980s and ‘90s industrial, goth, and new wave as we know these genres: it was being mapped out, track-by-track, on the Metro stage by the guy who, for all intents and purposes, created it, just as surely as Bowie kicked down the doors to glam rock in the early ‘70s.

The Pleasure Principle and Telekon came across just as smoothly, with the former hinting at an almost soundtrack-styled series of soundscapes. It’s not a long album, and while “Cars” is the obvious takeaway for the casual listener, “Metal,” “M.E.,” and “Observer” remain some of Numan’s catchiest and most compelling tracks (“Metal,” having been covered by everyone from Nine Inch Nails to Afrika Bombaattaa, is absolutely pummeling live and is perhaps the best harbinger of where industrial music would go in the 1990s when it met the radio).

Lyrically, the paranoia and future-shock of the “machine” albums seems perfectly at home in 2016, when surveillance, artificial intelligence, and robotic technology is the norm and not some comic-book vision of society gone mad. Songs like “I Dream of Wires” (‘we opened doors by thinking/we went to sleep by dialing O’), “We Are So Fragile” (‘they can give us a war just to keep us amused’), and “Engineers” (‘we are your heartbeat, we are your nightlife…all we know is you and machinery’) feature characters that are seemingly among us now, a shadowy, synthetic, robotic presence in our culture as we struggle to find the balance in the relationship between men and machines. Nowhere in Numan’s catalog is this more apparent than in the disparate, haunting Telekon. The most abstract of the “machine” records, Telekon’s presence live was almost as atmospheric as the studio version, which is something of an achievement given the dry, sometimes minimalist approach taken in songs like “Sleep by Windows” and “Remember I Was Vapour.” Offset by tracks like “The Joy Circuit” and “We Are Glass,” which call to mind the more hook-driven singles from Replicas, Telekon provided the most diverse set of songs in the three nights.

The real triumph of these three records, particularly when viewed as a trilogy of sorts, is the exploration of that man/machine relationship, and the humanity in Numan’s early work is something that, to this writer’s eyes, has never been given enough credit. For every warbling, synthesized echo, there’s a lush, layered piano melody lurking nearby, for the robotic delivery of vocals in songs like “Cars,” there’s a tranquil, softly-sung tune like “Please Push No More.” Telekon in particular hums with a kind of paranoid menace, but by the end, gives way to “I Die You Die,” one of Numan’s greatest pieces, bringing the trio of albums full circle. (It’s no surprise, taking the three-night longview of the setlists, that “I Die You Die” was one of the only songs played each night, alongside “Cars,” “Metal,” and “Down in the Park.”) That the material translated so well to a live stage more than thirty years down the line is a testament to how ahead of his time Numan really was in building his dystopian musical world. If you walked into a club and saw these songs being performed for the first time this weekend by a brand-new artist, you’d be throwing your credit cards at the merch table and demanding for someone to get Riot Fest on the phone.

Establishing a real legacy is one of the hardest things for a musician to do, requiring just the right combination of timing and talent—there’s a reason that, in the grand scheme of things, there are relatively few enduring musical icons. Gary Numan is a both a legend and an icon, a mad scientist and great songwriter, and as this live exploration of his most epic work proved, his legacy is etched in stone.

For photo gallery from the three nights at the Metro in Chicago, click here

Do You Need the Service?

It Must Have Been Years

We Are So Fragile

Praying to the Aliens

When the Machines Rock

I Nearly Married A Human

You Are in My Vision (w/ Billy Morrison)

Remember I Was Vapour

My Shadow in Vain