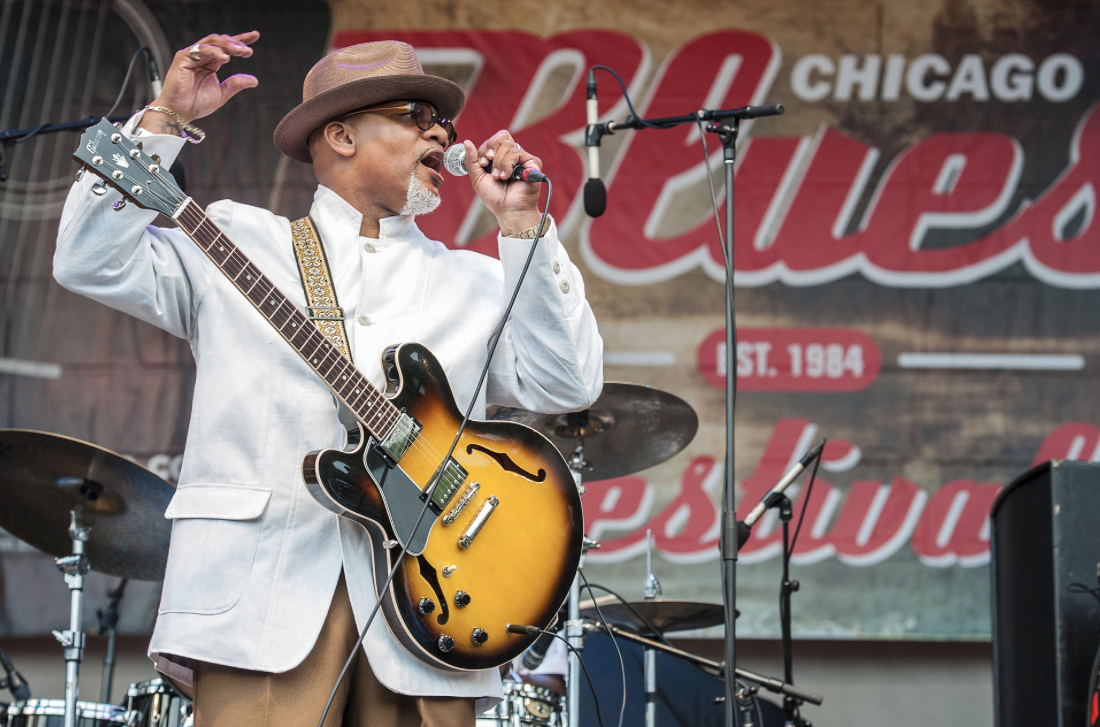 The Department of Cultural Affairs and Special Events (DCASE) is pleased to announce the full lineup for the 33rd Annual Chicago Blues Festival happening June 10–12 in Grant Park. The three-day festival will open on Friday, June 10, with a celebration of the 45th anniversary of Chicago’s Alligator Records and conclude on Sunday, June 12, with a special tribute to the legendary Otis Rush featuring notable friends and other musicians he has influenced throughout his career.

The festival headliners throughout the weekend include: Shemekia Copeland with guest Curtis Salgado, Lil’ Ed and the Blues Imperials with guest Corky Siegel, Tommy Castro and The Painkillers with guest Toronzo Cannon, Fred Wesley and the New JB’s, Irma Thomas, Wee Willie Walker & We “R”, Eddy “The Chief” Clearwater and Ronnie Earl & The Broadcasters.

The festival opens on June 10 with a salute to Chicago’s Alligator Records for 45 years of what the label describes as “genuine houserockin’ music.” Deeply rooted in the blues, several of the label’s renowned recording artists will perform at the Petrillo Music Shell to kick-off the festival.

2015 GRAMMY® nominee Shemekia Copeland will headline the tribute with a sizzling performance of her many hits since her debut in 1998. She will take the stage at 8:15pm along with guest Curtis Salgado, the award-winning blues icon and Alligator artist. The Petrillo Music Shell will open at 6pm with Tommy Castro & The Painkillers with special guest Toronzo Cannon. The group’s funk and blues sound will delight fans with their guitar licks and high-energy performance. Always a crowd favorite, at 7pm Lil’ Ed and The Blues Imperials will bring their rowdy blues show to the Petrillo Stage along with a special collaboration with Corky Siegel.

Headlining the evening on June 11 at 8:05pm is jazz and funk trombonist Fred Wesley & The New JB’s. Wesley is best known as the music director, arranger, trombonist and a primary composer for the legendary James Brown from 1968 to 1975. Best known as “The Soul Queen of New Orleans,” Irma Thomas will take the stage at 6:30pm. Thomas’ career has spanned over five decades and the GRAMMY® winner is not slowing down. Soul legend, Wee Willie Walker & We “R” will kick-off the evening at 5:30pm. Walker’s latest release, If Nothing Ever Changes has garnered him three 2016 Blues Music Award nominations; Album of the Year, Soul Blues Album and Soul Blues Male Artist.

Legendary blues guitarist Otis Rush arrived in Chicago from Mississippi in the 1950s after seeing Muddy Waters perform while visiting his sister. Rush worked tirelessly to establish himself as an innovative blues guitarist, bandleader, singer and songwriter by playing with the legendary bluesmen of the day. Rush set new standards and influenced countless blues and rock musicians.

The evening will begin at 5pm with Ronnie Earl & The Broadcasters. As an award-winning blues guitarist, Ronnie Earl learned from Rush and considers him to be the greatest musical influence on his career and life. The tribute continues at 6:30pm with Chicago legend Eddy “The Chief” Clearwater. Known as a blues-rocking showman with his left-handed, upside-down guitar playing and his signature Indian headdress, Clearwater is among the very finest bluesmen performing today.

The Bud Light Crossroads stage will feature a lineup of local and national artists. On Friday, June 10, fans won’t want to miss Maurice John Vaughn’s triple threat on guitar, saxophone and vocals at 12:45pm and the gritty blues and rock sounds from Wichita, Kansas’ Moreland and Arbuckle at 2:30pm. Saturday, June 11 is Soul/R&B day with performances by artists paying tribute to the legendary Otis Clay featuring Cicero Blake at 11:15am, Theo Huff at 12:45pm and the Otis Clay Tribute Band at 4:15pm with original members of Clay’s band. On Sunday, June 12, Clarksdale, Mississippi’s James “Super Chikan” Johnsonwill bring his Delta blues sound to the stage at 12:45pm. Rounding out Sunday’s lineup is gospel, blues and soul artist, Diunna Greenleaf at 4:15pm.

The Jackson, Mississippi Rhythm & Blues stage kicks-off on Friday, June 10, with a panel discussion on the 45th Anniversary of Alligator Records at 11:30am. Performances on opening day include “Miss Equal Opportunity,” Pat Brown at 2:30pm and former Howlin’ Wolf band leader, Eddie Shaw & Wolfgang at 4pm. On Saturday, June 11, the Southern Komfort Brass Band will perform their unique mix of funk, blues, jazz, rock and hip-hop at 1pm and with an additional jam session at 4:30pm. To celebrate the centennial of the “Great Migration” on Sunday, June 12, the day will begin with a panel discussion at 11:30am that includes blues artists Nellie “Tiger” Travis, Eddie Shaw and John Primer. The panel will be followed by a day full of the sounds of the Delta blues…with a Chicago twist.

The Pepsi Front Porch will start each day at noon and on Friday, June 10, highlights include guitarist, author, storyteller and oral historian, Fruteland Jackson at 1:30pm. The day will end on a high note with the Legends of Blues featuring Sam Lay, Corky Siegel and Marcella Detroit at 4:30pm. On Saturday, June 11, at noon, Fernando Jones will present an international set featuring Jones’ Chicago band and musicians from Italy through a collaboration with A – Z Blues and Italy’s ll Blues Magazine. The Pepsi Front Porch will keep the blues alive on Sunday, June 12, with blues/rocker Melody Angel at noon, followed by The Jimmy Burns Band at 2:30pm. A driving force in blues music today, John Primer & The Real Deal Blues Band will perform at 3pm. The stage will wrap up on a fitting note with the great blues guitarist Lurrie Bell at 4:30pm.

Blues fans wanting to get up close and personal with artists won’t want to miss the Southwest Airlines® Blues Lounge. The lounge provides an area for festival goers to relax and listen to music and stories from the heart throughout the day from 11am–8pm.

The festival also features intimate performance areas, like those provided by the Blues Kids Foundation and the Windy City Blues Society. The Blues Kids Foundation area offers harmonica lessons and performances by the next generation of blues artists. The Windy City Blues Society, a festival favorite over the past few years, features an eclectic lineup of artists from Chicago and around the country. Schedules for both of these areas can be found at chicagobluesfestival.us.

Leading up to the Chicago Blues Festival, during May and June there will be several preview performances and film screenings held at the Chicago Cultural Center (78 E. Washington St.), Millennium Park, as well as Chicago Park District and Chicago Public Library locations throughout the city. Highlights include Kenny “Beedy Eyes” Smith at the Chicago Cultural Center on Tuesday, May 3, at noon, Billy Branch and the Sons of Blues at the Garfield Park Conservatory on Wednesday, May 4, at 6pm and a special screening of Mavis!, a documentary film on Mavis Staples and the Staple Singers in Millennium Park on Tuesday, June 7, at 6:30pm. For a complete list of performances and events visit chicagobluesfestival.us.

For more information, please visit chicagobluesfestival.us. To plan your trip to Chicago for the Blues Festival, visit choosechicago.com. Join the conversation on Facebook (Chicago Blues Festival) and follow us on Twitter and Instagram @ChicagoDCASE (#ChiBluesFest).

The Department of Cultural Affairs and Special Events (DCASE) is dedicated to enriching Chicago’s artistic vitality and cultural vibrancy. This includes fostering the development of Chicago’s non-profit arts sector, independent working artists and for-profit arts businesses; providing a framework to guide the City’s future cultural and economic growth, via the 2012 Chicago Cultural Plan; marketing the City’s cultural assets to a worldwide audience; and presenting high-quality, free and affordable cultural programs for residents and visitors. For more information, visit cityofchicago.org/dcase.