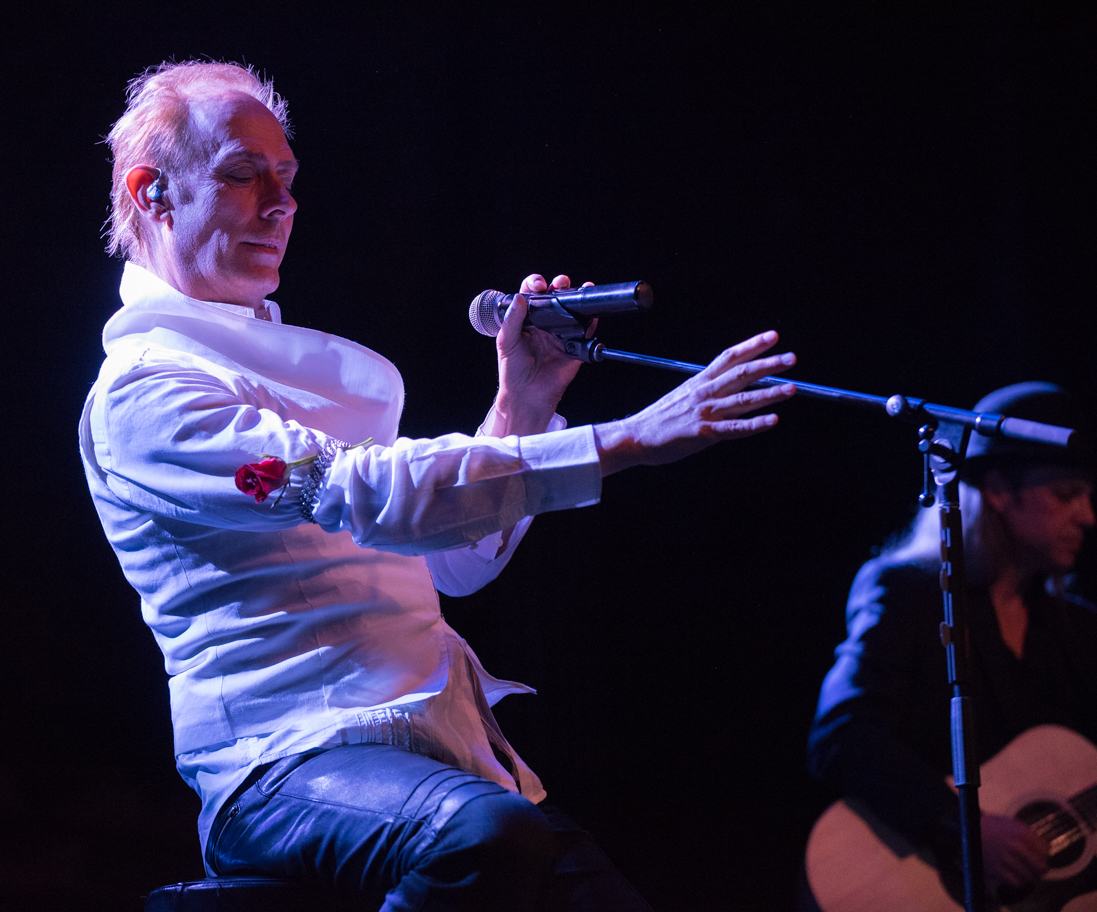 Peter Murphy returned to Chicago last night for an intimate stripped down performance at Pilsen’s Thalia Hall. He was joined by two other musicians on a dimly lit stage and performed songs from his illustrious career that span from Bauhaus to his last solo record.

The performance started off with Cascade. It was just Peter Murphy taking center stage with Emilio China on his right playing electric violin and bass guitar and John Andrews on his left playing an array of guitars.

Murphy was dressed in his usual dapper style with romantic flair. A white top with a single red rose on his right arm, black leather trousers and those prominent check bones.

Murphy played several instruments that included 12 string guitar, 6 string acoustic guitar and his classic melodica.  On occasion, he thumped his guitar bodies or clapped his hands for percussion.

At times throughout the performance, it felt almost cathartic. The music was hypnotic. His baritone levels reverberated through the hall and right through you. I felt myself swaying in and out of thought almost as if in a trance. It’s was peaceful and welcoming.  Maybe more of his Turkish roots are coming through on this. What ever it was, it was good.

Peter Murphy didn’t just sit on a stool for the entire performance. He go up and walk around and did his signature moves and poses, just at a lessor rate. He circled China and Andrews like he was going to pounce on prey. He graced the front of the stage and made gesture to the lucky few seated in the balcony’s. He drew in your attention and kept it. Just because this was a “stripped” performance, didn’t mean it was any less entertaining.

The audience proved they loved it. The sold out show was filled with adoring fans who called out for more, shouted their requests and sand along with Murphy as if in a pub joining in on a bar room classic.

He played through over a dozen songs and ended on Lion. He walked off stage as his band finished it out.  After a short break, they came back out and played another couple songs before once again leaving.  The final call came with their return as Murphy invited the audience to come up closer, to leave their seats and be with him at the foot of the stage. The house soon jumped up and meet with him. He walked back and forth like a lion pacing for a hunt. He shook hands, passed out rose pedals and gave thanks to all for coming out.

To see Peter Murphy in this way is to see Peter Murphy raw and in his purest form. This was an unexpected surprise. Not that I thought it was going to be something terrible, just better than expected. This was about the music. His passion for what he does and his adoration of his fans.

To catch Peter Murphy on this Stripped tour, click here

For a video sample of the show at Thalia Hall, click here