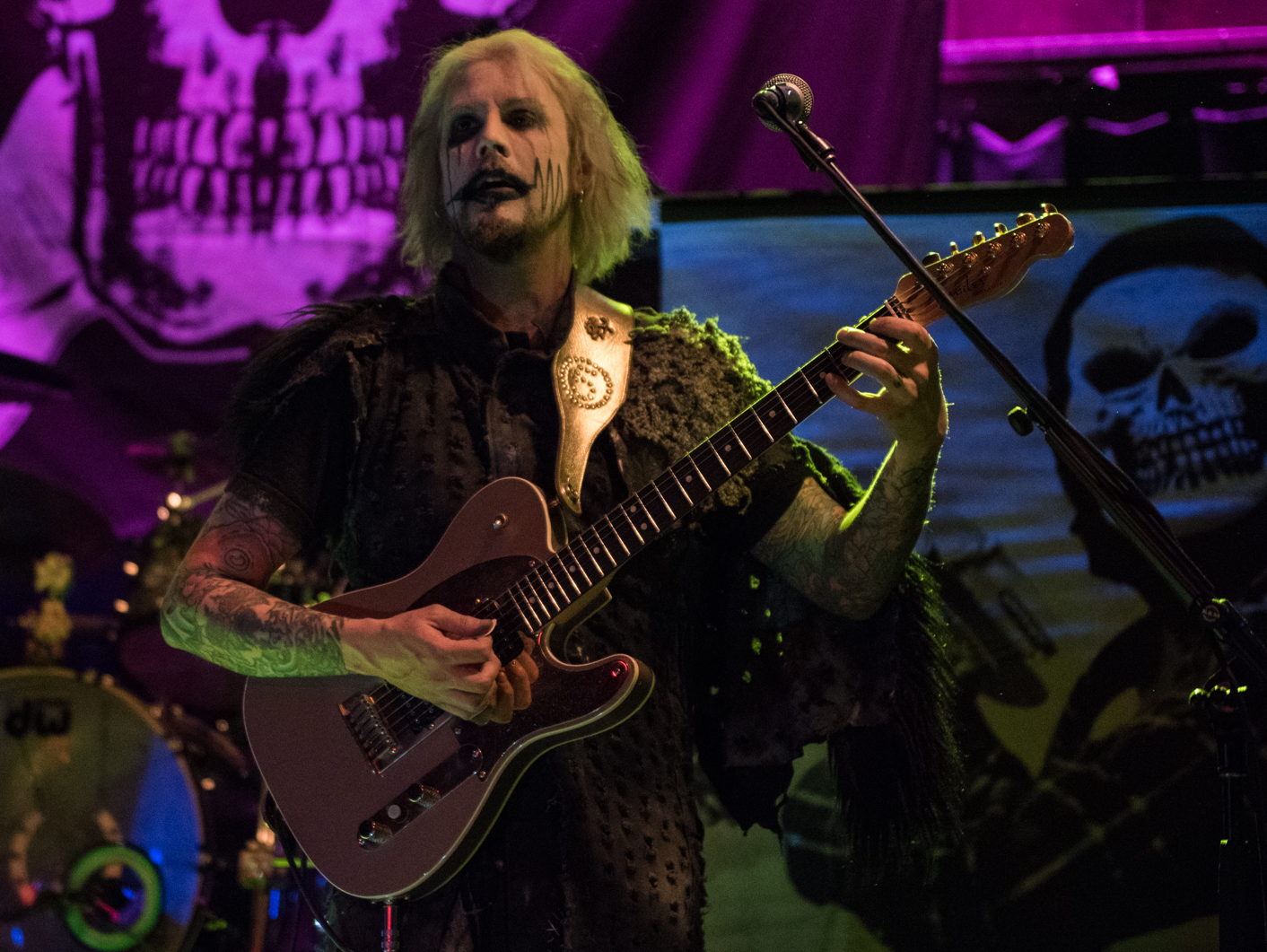 One of the most underrated and versatile players in all of rock and metal (though it seems almost limiting to describe him that way), John 5 and his power trio, the Creatures, arrived in Chicago on Sunday night and enjoyed a spellbound capacity crowd at Reggie’s Rock Club.

He’s a specific kind of musician and character. I say character not as an insult or to imply that he’s putting on airs, but “5” occupies a special kind of niche; immersed in an image that mirrors that of his current full-time band leader (Rob Zombie) with monsters, serial killers, and creepy imagery in abundance, his is truly an artist of his own making. And when he picks up a guitar, he makes it clear that there is no one like him.

With a zombiefied backdrop and massive skull-and-crossbones glaring over the stage, “5” took the stage in a furry, glam-rock half cape and face paint, not unlike a Universal Monsters’ inspired Brian Eno and tore through 75 of solo and re-imagined cover songs. Focusing mainly on selections from 2014’s Careful With That Axe with a few earlier solo tracks making an appearance (“First Victim” from 2007’s The Devil Knows My Name and “Sin” from 2005’s Songs for Sanity), it was a very pure performance; it takes a special kind of musician in the streaming-media age to command a roomful of adoring fans with an hour-long instrumental set. To that end, it was always interesting – the famous “light” guitar and “lava lamp” guitars made brief appearances, and things went up a notch when he trotted out the first of his 2016 tracks (being released monthly for collective release later this year), “Black Grass Plague.” “Black Grass” saw an effortless switch from guitar to electric mandolin to banjo, tearing a fiery hole in a series of classic bluegrass progressions, highlighting just how wide John 5’s sphere of influence extends. When introducing “Behind the Nut Love” — a silky, light country-styled song – he noted how the song was inspired by a love of 1970’s TV show “Hee Haw” and the use of lap steel guitar – not typically the open-book you’d expect from a guitarist so closely associated with heavy/industrial metal.

The Creatures – Ian Ross and Rodger Carter on bass and drums, respectively – are an unbelievably tight rhythm section that offer the perfect balance of steady backing and musical color – the aforementioned “Black Grass Plague” saw a call-and-response between bass and guitar that was as smooth as could be, and during the grand finale – a medley of rock riffs that included just about everything one could think of from Slayer to Iron Maiden to Van Halen and everything in between – the interplay between the three was astonishing.   Attacking a rapid succession of riffs with razor precision, “5” was all smiles, thanking the crowd profusely and clearly appreciative for the attention.

He deserves it, perhaps more than any other guitarist currently out there.

We Need to Have a Talk with John (intro)

Flight of the Vulcan Kelly

This Is My Rifle

Behind the Nut Love

To find out more info on John 5 & The Creatures including more tour dates, click here

For photo gallery from the Reggies show, click here