Interview : Paul Bostaph of Slayer on 2016 Tour and New Album 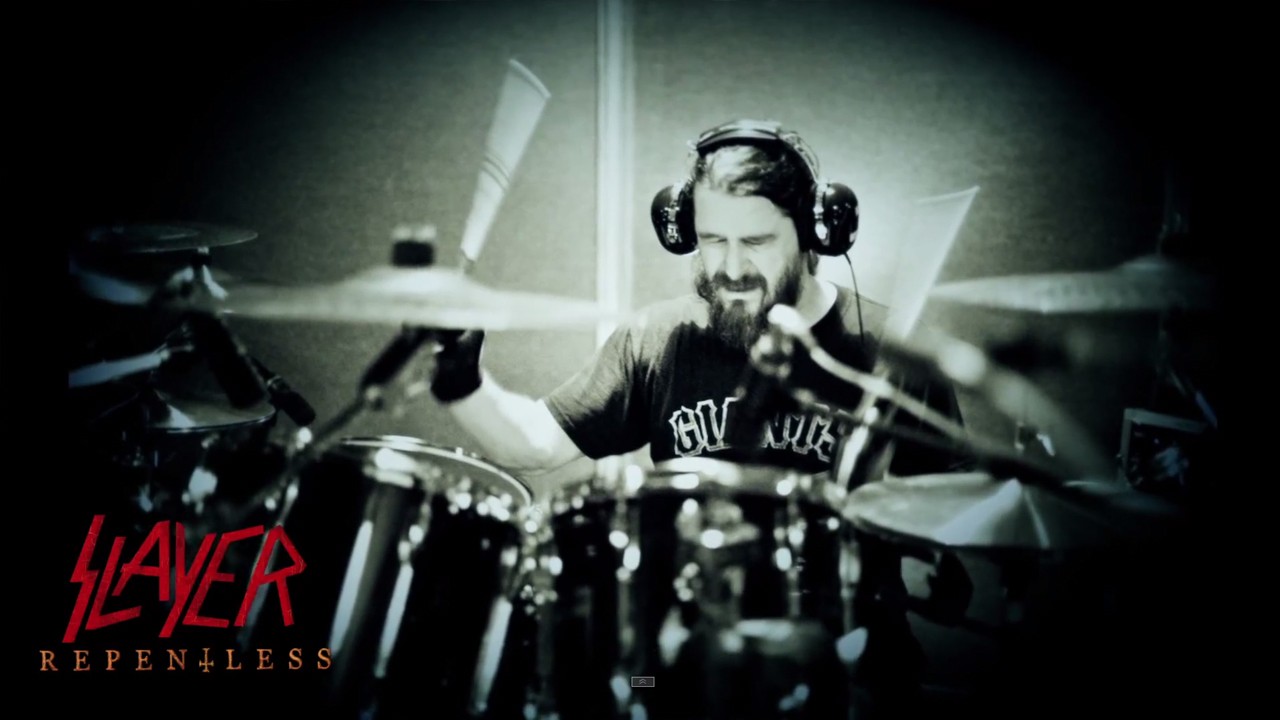 Slayer kick on their 2016 Repentless World Tour TONIGHT in Chicago.

In The Loop Magazine’s Christopher David has been documenting and informing Loyal Loopers for some time now on Slayer. Here is his latest story and interview with Slayers drummer, Paul Bostaph.  Together, they discuss the new album, the dynamics of the new Slayer sound, the band relationship between members and life without Jeff Hanneman and the current world tour starting in Chicago.

Chris (ITL): So first off, congratulations on Repentless. It’s a phenomenal album and you guys should be very proud. You’re in a bit of a unique situation, as you’ve been in the band, then not in the band, then in the band again. What was the dynamic like this time around, given the changes that have occurred in the last few years with Slayer?

Paul: Thank you! Well, the changes themselves affect the dynamic, of course, but in terms of going into the studio for this record, how I’m used to doing things with the band, the vibe, knowing what we go for, the dynamic didn’t change in those ways. Unfortunately, we didn’t have Jeff with us, there were elements that were missing which of course affected the overall dynamic, but Tom and Kerry were still there, and we were all very focused, we all have input on the songs and the process. There’s a way it works with this band, and we were very solid with the way we approached things.

And you know, we didn’t have Jeff with us, but I felt his presence in the studio. I don’t mean in some ethereal way, or anything like that. It’s funny; he could have been sitting on the couch, and I would have known that he was there, but since he wasn’t…I don’t know, it actually made me think of him more. It was kind of a ‘what would Jeff have done’ sort of thing, it kept his opinions and his approach in my head, and that helped the whole dynamic, actually.

Chris (ITL): That’s a really interesting point. When you’re in a band with someone for a length of time, and you’re that intimately familiar with the way that people contribute to that situation, you are going to feel that presence when they’re not there – you’ll know, at some level, what their instincts or intuition would have been.

Paul: Exactly. Being in a band is its own kind of relationship, year in year out, and you take for granted sometimes the things that someone contributes to a band, to a team, whatever. But when that person is missing, you really recognize it. Sometimes when someone’s right there in front of you, you don’t feel their presence as much as you do when you know they’re gone.   In a creative situation like that, their absence affects you on more than one level. There’s a personal level, an artistic level, but on that side of it, the one thing I never anticipated happening was feeling that presence. I think as musicians we tap into something in our minds, in all sorts of different ways. That’s part of why I love playing music, is you’re able to tap into something that you’d never think of otherwise, and you don’t know where it comes from, which is awesome.

So when I was going through that in the studio, Jeff would pop up for me in that way. It was an important feeling.

Chris (ITL): As a musician, I totally get that. When you have that creative relationship with someone, it’s almost like their musical personality becomes a new way of knowing them, because you come to understand pieces of their creative approach and sometimes it’s something that you yourself can access, that sense of how they would approach something, which is very unique.

Chris (ITL): So what was it like working with Terry Date (producer)?

Paul: Oh, man. Working with Terry – and I say this as the highest form of compliment – wasn’t like working with “The Producer.” You know what I mean? It felt like he was another member of the band. When I work with a producer, I don’t want to feel his presence, I don’t want his fingers all over everything I do. When Terry walked in the room, all I could think about was what he’s done in the past – I was just happy to meet the guy, because over my career I’ve wanted to work with him and never had the opportunity. And to get to work with him on this particular record was amazing. In terms of the drum sound, what we for, I really enjoyed it – he has a very calm personality, he’s a mellow guy, but his contributions are huge.

Chris (ITL): I think a hallmark of a truly great producer is when his or her presence really comes in that spirit of actual collaboration, as opposed to just smacking a blackboard with a ruler and demanding that you play a certain way, for sure. I can definitely see that being a much more enjoyable and productive situation.

Paul: Yeah, it really allowed us to get in there and just charge forward. He was very much ‘one of us.’

Chris (ITL): You have a new video coming out for “You Against You,” and the teaser came out this week. It looks amazing. Where was that filmed?

Paul: We filmed that in southern California in the high desert, and it was close to an air force base. There’s this guy, and he’s a collector of like, airplane wrecks, decommissioned planes, that kind of thing, so we went out there and filmed it on this guy’s property!   It was a huge yard, and it was just amazing – he had a C-130 without the wings, and you know, how often do you get to sit in the cockpit of one of those things? When I was done with my part of the video, I just walked around all day, sitting in cockpits, checking out these planes. It was awesome. The video is killer, definitely the most fun I’ve ever had making one. When you see it, just know, those aren’t props – that’s all real stuff!

Chris (ITL): That’s definitely one of those opportunities that you don’t get very often! It definitely sounds awesome.

I want to pull back a little and talk in a broader sense about Slayer – as a long-time fan, I’m curious – a couple of years ago, you played Riot Fest, and you did Reign in Blood in its entirety. It was really interesting to see you guys in that context, such a diverse festival environment, with such a wide demographic of people really into what you were doing. Obviously, there were the metalheads and the lifers, but there were a lot of other kinds of people there. In terms of how Slayer is perceived now after over 30 years, from a band perspective, are you seeing a shift in how Slayer is viewed by culture? You seem now like a recognized, respected part of the musical landscape now in very broad terms. Is that something that the band recognizes or acknowledges, and therefore responds to in some way?

Paul: That’s a good question. My perspective is a bit different on this, like we said, because I’ve been in and out and in again. Slayer seems almost like a rite of passage now, for some people – just seeing the logo or hearing the name, a lot of people know what it is, or they’re at least heard of it.

You know, being a Slayer fan to me is almost like being in Fight Club. *laughs* In that movie, when Edward Norton firsts starts the thing, and he’s in the diner, and all of these guys are silently acknowledging each other as members? The only difference is that Slayer fans don’t silently acknowledge each other, they just yell “Slayer.” *laughs* I can say that, internally, we don’t really think about it. To a certain degree, we’re aware of it—how can you not be?— but on the other side of it, too much reflection can mean that your career is over.   We try to remain in the present, in the now, and all of these things just build up over the years, if you’re lucky enough, to where you’re ‘regarded’ in some way, that people still want to see you, and you’re honored by that.

Chris (ITL): I can see that perspective; I think when you do see bands looking back a little too much, it can be indicative maybe of some hesitation or uncertainty about where they’re going next. I think one of the things that still makes Slayer so viable and current is that, while you’ve obviously evolved over time in many ways, you’ve really stayed the course in terms of what you do, stylistically. That’s worked in your favor, I think.

Chris (ITL): Being able to evolve while staying true to what you’re doing is about the best position a band can be in.

Paul: I think it’s a great position to be in, because you can do what you love to do – I’ve been lucky enough to be a fan of Slayer, but I’m in the band!   If you’re a real fan of the style of music that you’re playing, you’re pretty lucky. And if you can continue to do that, and still evolve your style without compromising it, I think it creates a sense of loyalty. Slayer doesn’t compromise, and I think that’s why people are so loyal to Slayer.

Chris (ITL): They are indeed. So, what can people expect from this big tour kickoff in Chicago this weekend with Testament and Carcass?

Paul: Man, this tour is going to be awesome. I’m stoked because I get to see both of those bands every night. Gene Hoglan, one of my favorite drummers, every night. I’m going to be watching every fucking night. *laughs* To get to see Testament and Carcass, and then I get to play…it’s just a great heavy metal tour. I’d say people can expect to walk away tired!

Slayer kick off their 2016 world tour right here in Chicago starting TONIGHT! Click here for tickets and info on where they will be next.