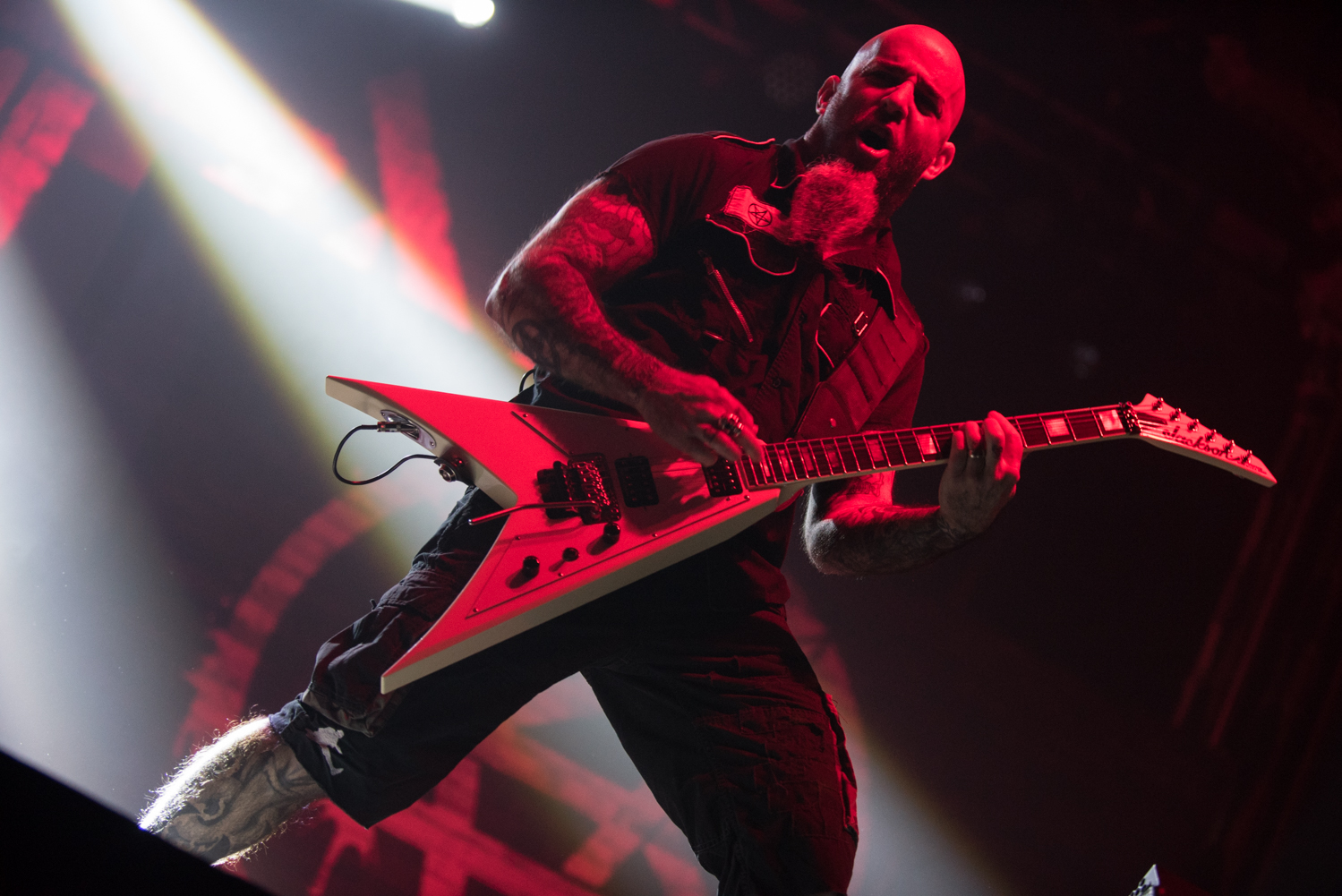 It’s a good time to be a fan of thrash metal.

Megadeth’s Dystopia is one of their best albums ever, Slayer is set to embark on a massive world tour in support of 2014’s Repentless…and to my mind, sitting at the top of this mountain is Anthrax.

The hardest working band in the so-called “Big Four,” Joey Belladonna’s return to the fold in 2010 promised big things—things that were delivered in spades on 2011’s Worship Music—and five years later, the New York quintet is set to release one of the best albums they’ve ever written, For All Kings (2/26). In preparation for that release, the band has been on the road with Lamb of God and Deafheaven for the last few weeks, and Chicago’s show at the Aragon Ballroom proved to anyone still doubting that Anthrax—currently celebrating their 35th anniversary–are at the top of their game.

While Saturday’s Aragon show was an opening set, you’d never know it from the reaction of the capacity crowd and the band’s fervor as they tore into “Fight Em Til You Can’t” from Worship Music, leading a chain of classics – “Caught In A Mosh,” “Got the Time,” and “Antisocial”—before the band stopped to catch its breath.

Pausing to greet the crowd and introduce a new song, iconic guitarist Scott Ian asked the crowd if they liked thrash metal, to which the response was predictable. “Then you’re welcome,” he grinned, before leaping into the razor-edged riff that guides “Evil Twin,” the first of two new singles from For All Kings. “In the End,” the band’s homage to Dimebag Darrell and Ronnie James Dio, was highlighted with murals of the two fallen metal icons flanking the stage. That song, perhaps more than any other in the set, remains a highlight of the band’s career and calls to attention just how adept they are at crafting an anthemic, hook-driven crossover between metal and hard rock, all while focused around a riff that every budding metal guitarist on earth probably wishes he or she had written.

“Breathing Lightning,” another new song (and perhaps the most accessible tune in the band’s catalog) and the long-time mosh anthem “Indians” closed out a set that was, alas, all too short, but such is the opening slot. Pausing midway at the song’s breakdown, Ian called an audible and the band stopped. “We want everyone on their feet, Chicago,” he snarled, “you people down here, down here, and all of you motherfuckers sitting up there in the balconies like it’s Sunday in church.”   As the front half of the ballroom erupted into the classic war-dance, the band got its wish. (Strangely absent were any cuts from 1985’s Spreading the Disease, currently celebrating its 30th anniversary with a deluxe reissue, but perhaps their headlining tour later this year will see some action from that classic slab.)

Anthrax have always been a band whose members are individually as strong as the whole. Bassist Frank Bello is a Tasmanian devil of crowd-rousing, while Benante continues to flourish as arguably the best drummer in metal. Belladonna and Ian, both excellent showmen, have long been the “face” of Anthrax for many fans, and new guitarist Jonathan Donais brings a new shot of adrenalin to the band’s lead guitar slot. Calling to mind the style of Eric Clapton in the sense that he makes the most blazing solo look so damn easy, Donais may just be the best lead guitarist in the band’s history so far – time will tell.

Regardless, For All Kings will usher in a new and vibrant chapter in the Anthrax story, and at the Aragon, the band proved beyond doubt that they’re up to the challenge

For more info on Anthrax, tickets and For All Kings, click here