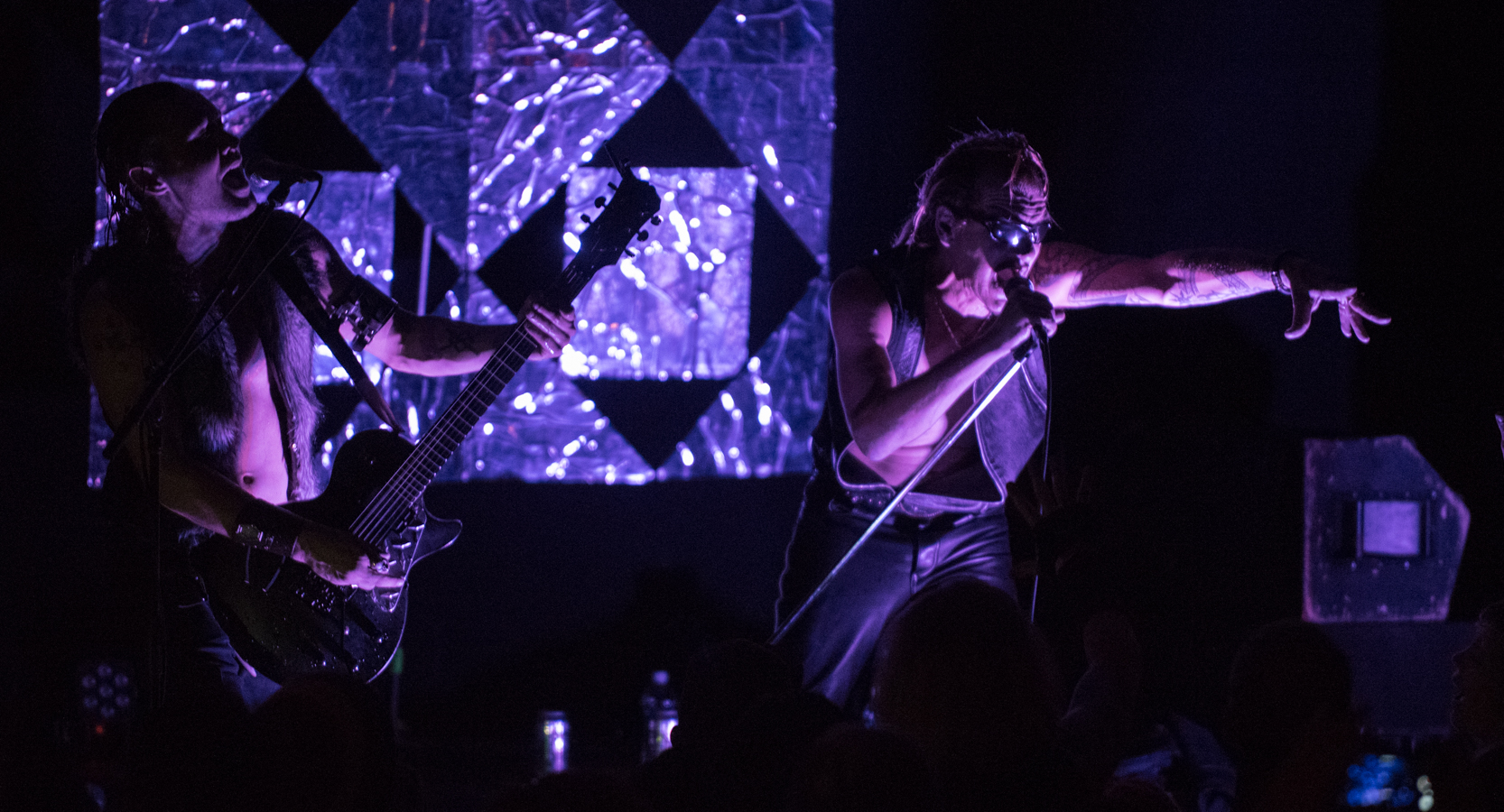 One must not take a Sunday night Cocksure / TKK show lightly, I say. How can one miss out on a double bill juxtaposing powerhouse grit with sexy cocktail smoothness? Those arriving early (“early”) were treated to a classic DJ Scary Lady Sarah set as well, as the table must be properly set for such an evening.

The joint project of Chicago Industrial veterans Chris Connelly and Jason Novak is a thing to behold. A power duo, these gentlemen hit the ground running with their first release in very early 2014, have not yet relented in their assault on our collective ears, and show no signs of doing so any time soon. Having witnessed their live performances several times, my expectations were high – and I was not disappointed.

Connelly channels a certain intensity when he takes the stage, straight from the get-go, and Novak pairs well, with a fierce stoicity as he does double duty in the command center and on bass. They led things off nicely with Razor Invader, showcasing a classic Connelly vocal, then hit us with Severance Package – a fine one-two punch. That’s when they dropped Guilt, Speed & Carbon on us, much to the crowd’s delight. This song encapsulates everything that is good and right in Industrial music, with an unrelenting beat, a rabid loop, and an authoritatively gravelly bass line, and Cocksure had us eating from the palm of their collective hand.

Things didn’t slow down there, either. Continuing with Silikon Suckaz, Hustler Face, and Skeemy Gates, Jason and Chris showed their breadth, leaving us wondering if we had been transported to the 1990s for a classic Industrial project we’d somehow missed back then. Jason’s programming skills were on full display as Assault on Cocksure 13 pummeled our senses with its driving dirge and Chris’ subtle vocal ferocity.

Harold and Cindy Hospital and Hi Talez rounded things out for their set, as they once again exhibited their ability to span not only the gamut of fervor, but seemingly decades of Industrial goodness. Throughout, the set was supplemented by a visual onslaught which complemented and compelled the viewers in attendance. The total package, Cocksure always delivers.

It was unknown if TKK’s injured cofounder, Buzz McCoy, would be in attendance for the show, postponed due to his having sustained a shoulder injury. Alas, he was unable to join the group, but we can’t let that keep us from having a little fun, can we?

TKK took the stage as a three-piece; Groovie Mann at center, with Mimi Star on bass to his left and Westin Halvorson on guitar to his right. The stage was adorned with a single foil-covered panel cut into diamond shapes, a fittingly spartan tribute to the missed McCoy. As they ramped up, we wondered what treats they would bestow upon us.

Groovie was clearly enjoying himself as the deathbeat disco began with WitchPunkRockStar, Leathersex, and Bella Piranha, an opening volley spanning more than two decades to get us in the mood. The crowd stood transfixed as the sinuous rhythms wound their way through our minds.

We were soft clay in Groovie’s hands as Sex On Wheelz rolled up and beckoned us along. He was in full form as the classic hit gave way to the slinky groove of TV Sista, casting a seductive spell which held us captive until Mimi dropped the hammer on the bass line of Neon Diva. They again took us back to treat us to quintessential 90s TKK stylings with Disko Fleshpot and Final Blindness.

The trip didn’t stop there, as the end of the main set was chock full of heady goodness. Without stopping to catch their breath, they brought us to Medusa’s top floor for club favorites The Days Of Swine And Roses, Kooler Than Jesus, and Cuz It’s Hot. The music never stopped as they continued to Ride The Mindway and A Daisy Chain For Satan, then closing the set out with one of the best movie songs ever, After The Flesh.

We had but just a moment to catch our breath and cool off from the long string of sexiness we had just experienced. Our dessert for the evening was a trio of songs from 13 Above The Night – Blue Buddha, Flesh Playhouse, and Electrical Soul Wish. We said our goodbyes and gradually filtered out of the venue, exhausted yet satiated, as one is from a night of long, slow, sensuous excitement.

Though not the full-blown display of debauchery of performances past, TKK delivered the B-movie slink with gusto as only they know how. I don’t know how he does it, but Groovie is still the embodiment of sexiness and moxie on stage, a conduit for the satire and provocation which has been the core of TKK since its inception. Well done, sir. Well done.

For more on the My Life With The Thrill Kill Kult, click here

Amaranthe Come Back To The States For Round 3, Known As The Massive Collision Tour Surprise Riot Fest Early (Turkey) Bird Ticket Sale Tuesday!