Interview: Blow Out Your Eyes on These Bass Drums: Disturbed’s Mike Wengren 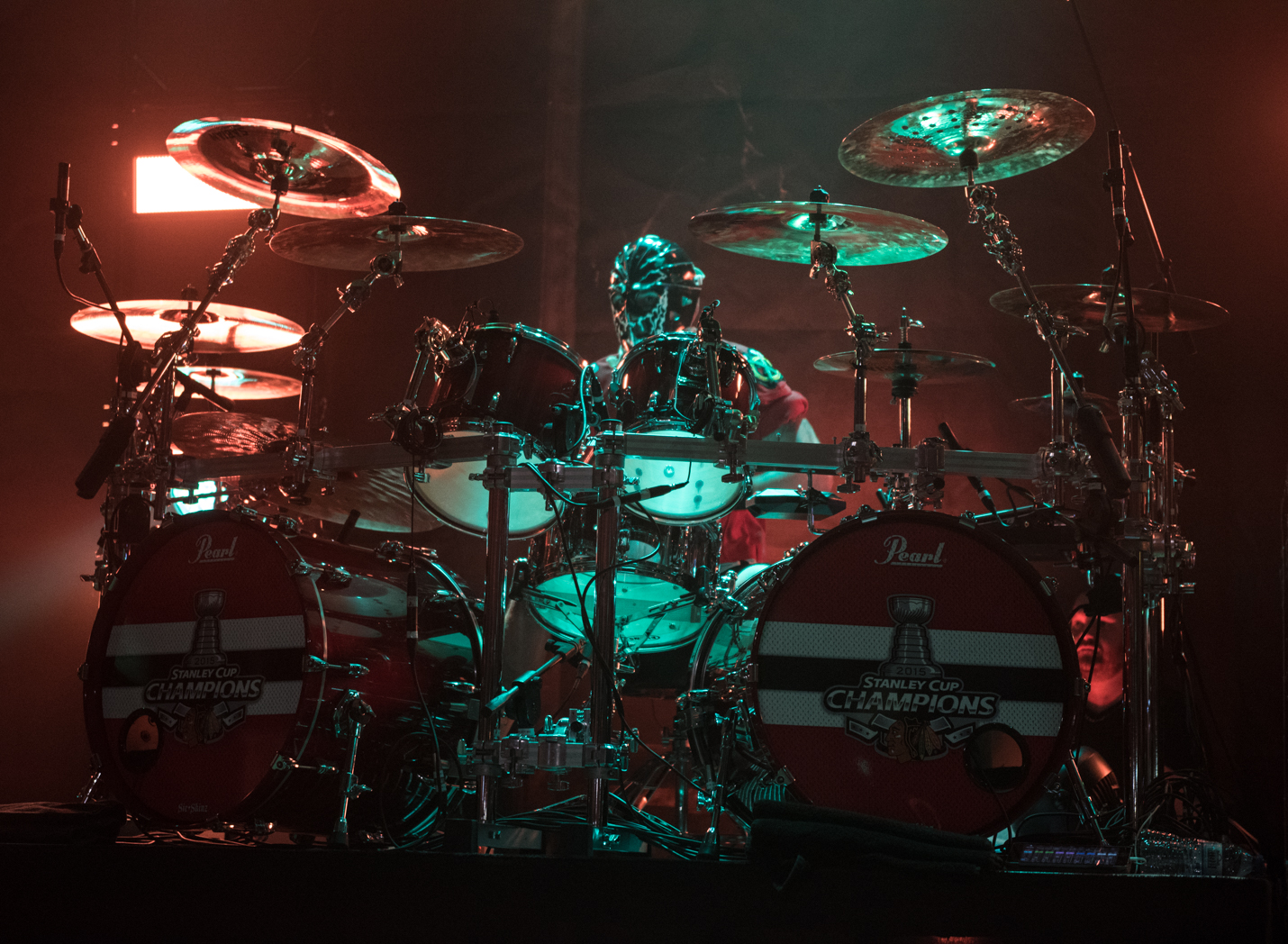 Disturbed drummer Mike Wengren displays his love of all things Blackhawks with a special Stanley Cup drum kit at sold out show last August at Chicago House of Blues.

Multi-platinum hometown boys Disturbed returned from a four-year hiatus in stellar fashion with a show at Chicago’s House of Blues on August 21st, a show that sold out in 2 minutes. That very same day saw the messiahs of metal release their sixth album, establishing them as a metal music dynasty by debuting with an astonishing fifth consecutive number one record- a feat matched only by Metallica, and bested only by The Dave Matthews Band, which has six consecutive albums to debut at number one. As fans were getting a little something for their earholes, they also got an eyeful, with drummer and manic hockey fan Mike Wengren brandishing a gleaming red double bass Pearl drum kit blazoned with two Stanley Cup logos celebrating that other local dynasty, the Chicago Blackhawks.

We took notice of this home team pride and spoke with Mike to get the story of this killer kit that pays homage to his favorite team.

MW: My Uncle Tom [Lazarz] had season tickets for the Hawks at the old Chicago Stadium. When I was about maybe 8 years old, he took me to my first game. I got to meet a couple players, I got to meet Al Secord, number 20. He was a huge power forward and here I am a scrawny 8-year-old kid, he was towering over me. What an amazing experience. Been a crazy fan ever since. I’m one of those knucklehead face-painter, jersey wearing, loudmouth getting kicked out kind of knuckleheaded fan, you know? When you’re in that building, the energy of the fans, and the players. It’s very primal for me. It’s like when you’re on stage, and you’re [playing] and the music takes over, that energy- to me, that’s one of the things I love about hockey.

MW: He was actually a drummer as well. He was a big reason why I started to play drums. He had his drums set up in his apartment. When I would go over I’d go sneak into the room and check out his drums. One day I was sitting on the throne and he caught me. I thought he was going to kill me, but instead he had a big smile on his face, and he actually encouraged me to play. Cool thing was he lent me some of his cymbals, so that I could keep playing, and throughout the years of abuse, I broke them, and I always felt bad about it. Jump ahead many years later, I’m in Disturbed, we’re successful- I bought him a brand new Pearl kit and a bunch of new cymbals to pay him back for everything he did for me.

KD: What gave you the idea for a Blackhawks drum kit?

MW: Just everything we were talking about- that energy of that building when they won the Cup was the best experience as a Hawks fan. It was something I wanted to pay homage to. I’ll be honest, there was a little bit of a personal agenda there- I was hoping that maybe we could get the word out there… here you have a Chicago hometown band who’s been fairly successful, representing Chicago, I thought to myself if I put the word out there, let the Hawks know ahead of time I’m going to have this kit maybe they would come to the show, and I’d even get the Cup to come out. I know in one of the past years, maybe 2013, Rush played- not that we’re at that level- but Rush played and Carcillo brought the Cup out, so maybe in the back of my mind I thought there was a small chance that could happen, but that wasn’t the only reason. It’s also a way to pay homage to my team, and to say thank you for all the years of kicking ass!

KD: You don’t live in the immediate Chicago area anymore. How often do you get to see the games?

MW: I have 2 young kids, so that takes up a lot of my time when I’m not working, so I don’t get down that often, but when I do I try to make it count. This past season I really only made it to a few playoff games, and luckily for me they won every time. But the best game of all was the last game, when they actually won the Cup on home ice. I cried like a baby, and I stood there for over an hour and I watched every single player skate around that rink with that Cup over their head. As a long time Hawks fan, it was the epitome and embodiment of being a fan, you know? For so many years they weren’t very good, but I stuck with them and I love them, it didn’t matter. For them to have a team the last six years that have been so dominating, it’s just a reward for sticking with them through the bad times. I never thought I’d see a Cup won, especially on home ice, or even being there. As a Hawks fan, I could die tomorrow, it just doesn’t get any better.

KD: Did you ever play hockey? Other sports?

MW: I never actually played, just a huge fan myself, I was never really an athletic kid, just kind of quiet kid, and kind of scrawny at the time but I definitely loved hockey.

KD: Favorite players- past or current.

MW: I’ve got to give it to Secord, you know? There are plenty of them to name, but Secord was my first, to me he was the epitome of hockey, big, strong, he could throw down with anybody, could drop the gloves, get out in front of the net, but he wasn’t just a goon. He scored goals, maybe a 30 goal a year scorer? He played on the same line with Savard and Larmer- the big guy who stands in front of the net banging bodies away.

KD: What has been the reaction to your Blackhawks drums?

MW: Only used it for the one show in Chicago. A lot of social media was blowing up, whether people were from Chicago or not. There are some fans who follow me on Twitter, and we give each other a little bit of ribbing during the season when playing each others’ teams. It was pretty cool of them to tweet things like, “hey, I saw pics of the kit, pretty cool even though I’m a Minnesota Wild fan, I think it’s cool that you’re representing your team.” It goes back to hockey fans being good sports.

KD: When will we see you play them again?

MW: As a Blackhawks fan I would die to set that kit up at COBO Hall in Detroit right next to Joe Louis Arena in Detroit, you know what I mean? [laughs]. But as a Disturbed member, I have a lot of great Disturbed fans from Detroit- it’s a great rock city! So, you know, I don’t want to be disrespectful to them, especially that particular kit, it screams Blackhawks! I wouldn’t want to alienate any of the Detroit Disturbed fans.

KD: But maybe you’ll bring them out when you are in Chicago again?

MW: You never know. We’ll see what happens. Let me put it this way-if the Blackhawks want to come out to any show and they want to bring the Stanley Cup, I’ll bring that kit. I mean come on- wouldn’t that be a perfect photo shoot? To have members of the team and the Cup, and the band on the stage with the drum kit? Right? Where do you see that? If the Hawks want to bring the Cup out, come on out, I’ll bring the [Blackhawks] drum kit!

KD: What was it like playing in front of your hometown crowd last August at HOB?

MW: It never gets old that’s for sure! Our hometown Chicago fans have always been so passionate. We wouldn’t be where we are if it wasn’t for them, so what better way to say thank you? Here we are back from a four-year hiatus, and the only show we did for the entire year was Chicago, so, it was a great way to say thanks for sticking with us all these years.

KD: Ever entertain the idea of writing a song for the Blackhawks?

MW: Would love to, would absolutely love to! They seem to be pretty set with Chelsea Dagger these days!

KD: What do you think of the Blackhawks going into the 2015-16 season?

MW: I’m pretty excited about the team. With the salary cap issue, you get concerned like hey, are they going to be able to pull it off again? The moves Bowman made this off-season, I’m pretty happy with. I think he’s done a really good job to keep the core intact and build the support team around them. It’s exciting. I think we’re going to contend again.

MW: We need to figure out a way to get that Cup back down on that ice and bring the drum set down [to United Center]. We’ll play a show or a song… you know, at home games they had that band playing live in the stands there. So, maybe we can figure something out- we’ll come down, I’ll bring the kit down and set it up there, we’ll play a song or an intro or something. If the Hawks come calling, I’m in! Go Hawks!