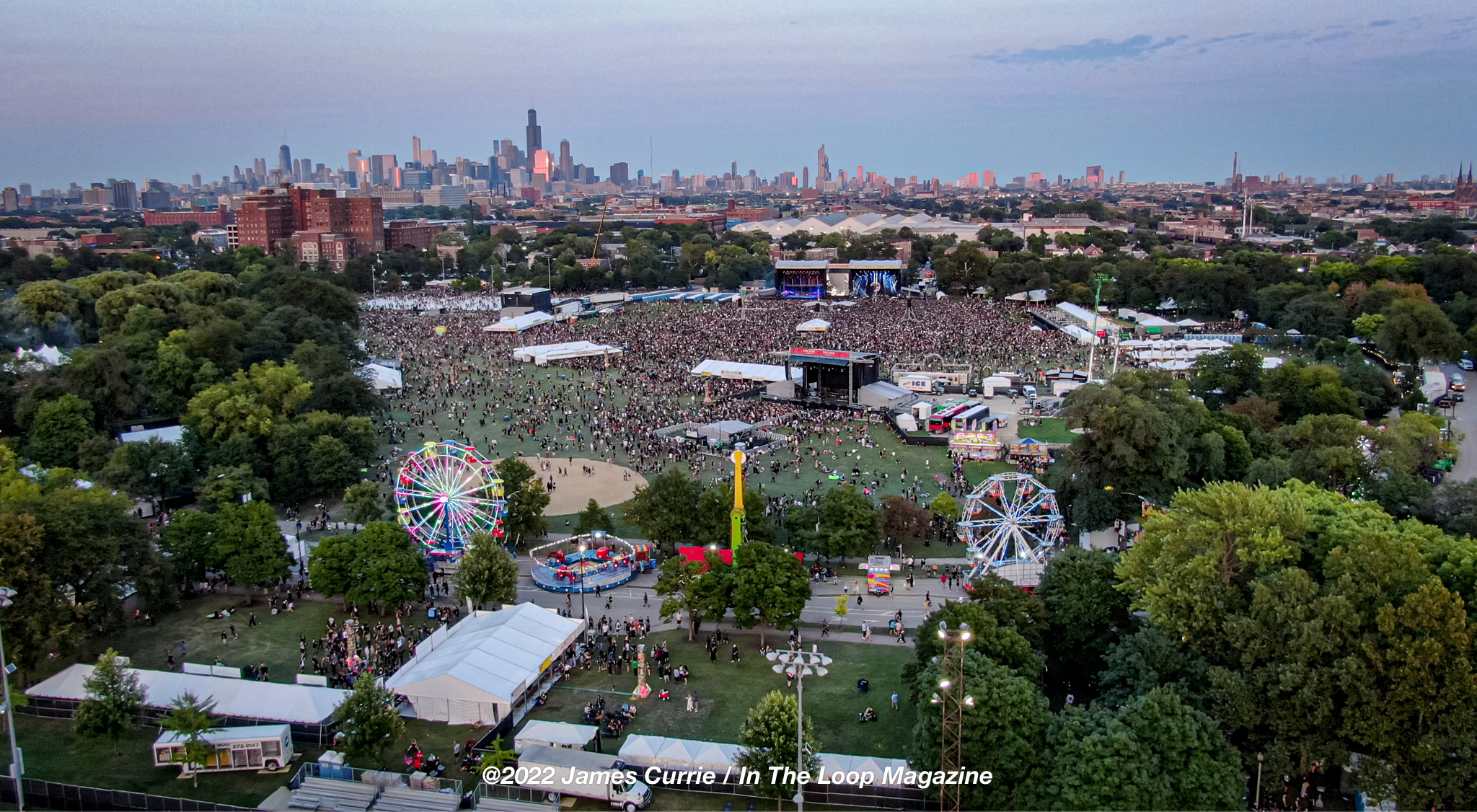 After some degree of uncertainty and much media drama, Riot Fest 2022 kicked off in Douglas Park on Friday with a solid lineup of bands on the rise, along with about ten thousand more people than usual due to a certain emo band’s return to the stage.

Manchester’s Pale Waves brought energy and killer hooks to the first set of the day, and their bright sound complemented some of the best weather one could hope for.  Vocalist/guitarist Heather Baron-Gracie’s style called to mind the ‘90s U.K. scene (think of a more punk-pop version of Elastica), and opening tune “Lies” from 2022’s Unwanted is a summer banger if ever there was one.

Speaking of punk-pop, San Diego’s Sitting On Stacy proclaimed the genre alive and well during one of the best and most jubilant sets of the day.  Certain bands just bring rock-star energy, it’s not something you can fake—and the California trio has it in spades.  Vocalist/guitarist Hoyt Yeatman brought headliner vibes to the band’s catalog of ska-tinged pop tunes, and there was even a shoutout to the ‘dads’ in the crowd as the band played a quick and on-point medley of Black Sabbath and Motorhead tunes.

Who is L.S. Dunes? teased a Riot promo last week, and Friday’s set answered the question with a crunchy set of straight-forward rock from five veterans.  Comprised of Anthony Green (Circa Survive), Frank Iero (My Chemical Romance), Travis Stever, (Coheed And Cambria), Tim Payne (Thursday) and Tucker Rule (Thursday), Dunes’ raging new single “Permanent Rebellion” was just one of numerous thrashy highlights in a set that could have been higher up the bill, showcasing airtight arrangements and Green’s uniquely androgynous vocal style.  But hey – it was their first show, after all, and with an album on the horizon this November, maybe a return set in 2023?

As a rock—and particularly a glam rock fan—it can often feel hopeless, as those who can really pull off the classic glam rock sound with the right amount of hooks and swagger are few and far between.  That said, count Foxy Shazam among them.  Vocalist/Tazmanian Devil Eric Nally is an absolute dynamo onstage, and his vocals call to mind Freddie Mercury without irony—Nally’s vocal range and delivery fits in perfectly with the band’s stomping, singalong approach to melody.  Opener “Unstoppable” and deeper catalog cuts like “Bombs Away” and “Killin’ It” sound as fresh as ever.  Curiously, the band only dipped into their 2022 album The Heart Behead You for one tune, but their fans didn’t seem to mind—Foxy Shazam are one of Riot’s biggest wins in recent years.

Algiers brought a unique, spellbinding set to the Rebel stage (which is having a serious moment this year), and their blend of styles really defies any kind of reasonable categorization – a rock/post-punk amalgamation of electronic and jazz-tinged sounds led by frontman Franklin James Fisher.  While their set would have brought more atmosphere later in the day, it was an exciting break from the norm.  El Paso duo Sparta had the tough job of filling a spot that was supposed to have been occupied by the almighty Placebo, but vocalist/guitarist Jim Ward led the band through an outstanding set of intensely emotional, guitar-heavy rock that called to mind the best bands of the emo era.

But if there was a band that could have been more at home at Riot Fest than Cleveland post-punkers Cloud Nothings, I don’t know who it is, and I don’t even care.  Lead vocalist/guitarist Dylan Baldi’s discography is deep enough at this point to fill two headlining sets, and as such, there wasn’t going to be enough time in their evening set for everything their rabid fanbase wanted to hear, but opener “Pattern Walks” was a hell of a start, and the band’s recent releases are a bit more on the lighter side as it is—this set was all about bombast, and if drummer Jaysosn Gerycz isn’t the most criminally underrated drummer out there, their set at Riot had to remedy that at least a bit.  One of the single best rock bands currently alive and kicking in the indie rock scene, the Nothings’ set was a triumphant reminder of why Riot continues to be the best party on the planet, year after year.