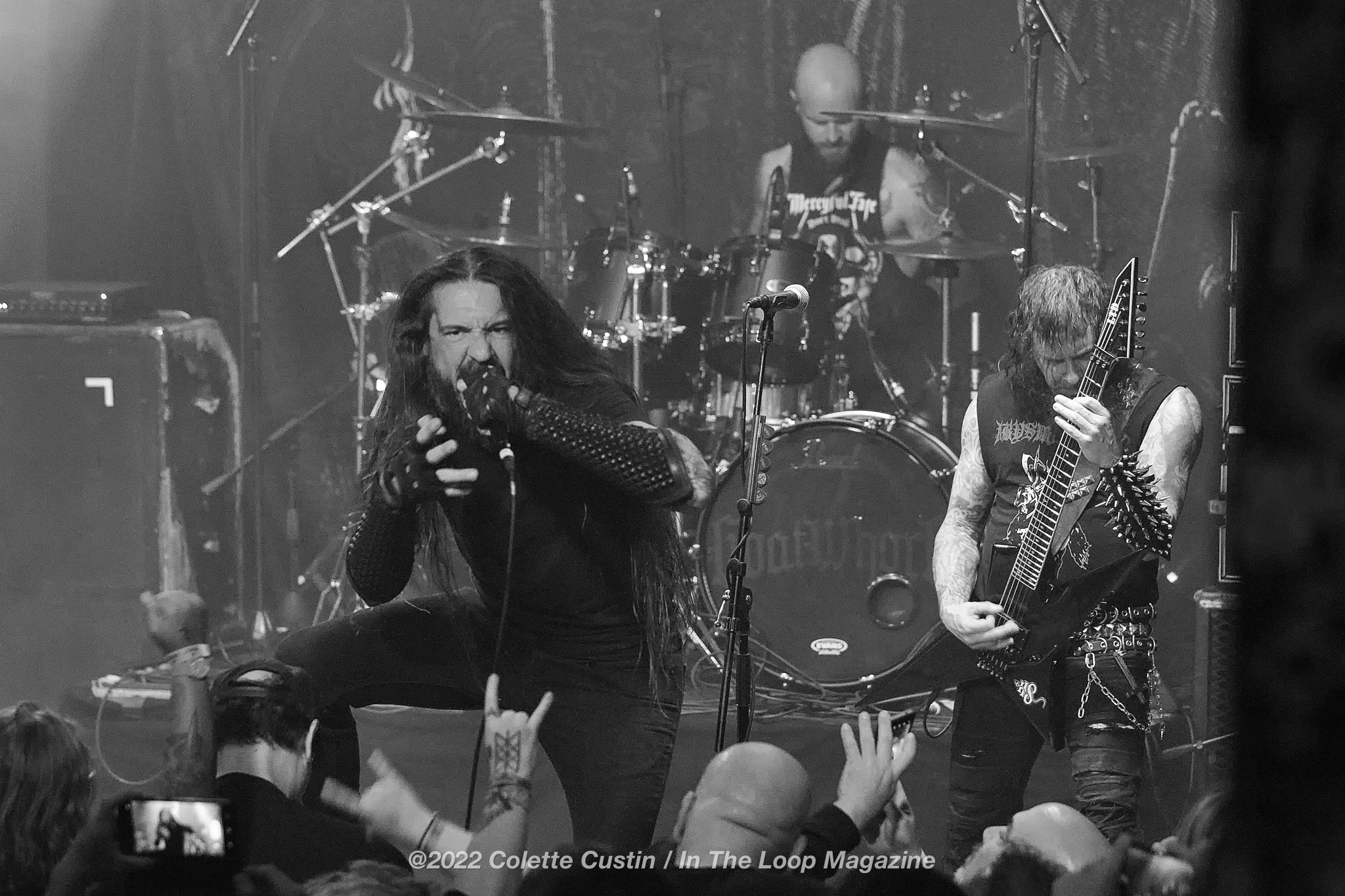 “We are here to play the devil’s heavy metal!” proclaimed Bewitcher vocalist/guitarist M. Von, setting the tone for the night before launching into “Satanic Magick Attack” at Reggie’s Rock Club on Thursday as the Vile Ascension tour arrived in Chicago.

Following a short but brutal set from Florida death metalers Caveman Cult, Portland black metal trio Bewitcher delivered a flawless nine-song set that showed exactly the nature of their own ascension.  Their most recent album Cursed By Thy Kingdom continues to make good on their Venom-influenced promise of hook-driven, anthemic paeans to the devil, blasphemy, and all manner of demonic sin.  “Too Fast for the Flames,” “Under the Witching Cross,” and eponymous set closer “Bewitcher” all bore the hallmarks of classic speed metal with not an ounce of fat.  For this black-metal loving reviewer’s money, Bewitcher are the best thing going right now.

New York death metal outfit Incantation was next up, and the band’s current creative boom was manifested in their hour-long set.  With a rarities compilation on deck in October (Tricennial of Blasphemy) and still riding the wave of their 2020 release Sect of Vile Divinities, and the quartet delivered a nonstop string of sludgy riffs, with tunes like “Entrails of the Hag Queen” and “Carrion Prophecy” showing off the band’s versatility in arrangement; Incantation remain one of the strongest death metal acts we have.

New Orleans’ Goatwhore served as the headliner, though it’d be tough to consider the Vile Ascension tour as less than a co-headlining tour.  No matter; Goatwhore are one of the tightest live metal bands out there, and vocalist L. Ben Falgoust II is a towering presence on stage, effortlessly commanding the crowd during cuts like “Baring Teeth for Revolt” and “Alchemy of the Black Sun Cult.”  Guitarist Sammy Duet embodies the spirit of thrash onstage, and his riffs on new single “Born of Satan’s Flesh” set the bar high for Goatwhore’s forthcoming album Angels Hung From the Arches of Heaven.

“It’s been a while, hasn’t it?” snarled Falgoust as he introduced “Collapse in Eternal Worth” from 2012’s Blood for the Master, and judging from the frenzied pit and capacity crowd’s response, it had been.  Far too long, in fact, so let’s hope they’re back sooner than later.  As the Vile Ascension tour has proven, the audience for extreme metal remains as loyal and present as ever.