Concert Review: Roger Waters, This Is Not A Drill Chicago, Stunning Audio And Video Showcase Of Legendary Catalog 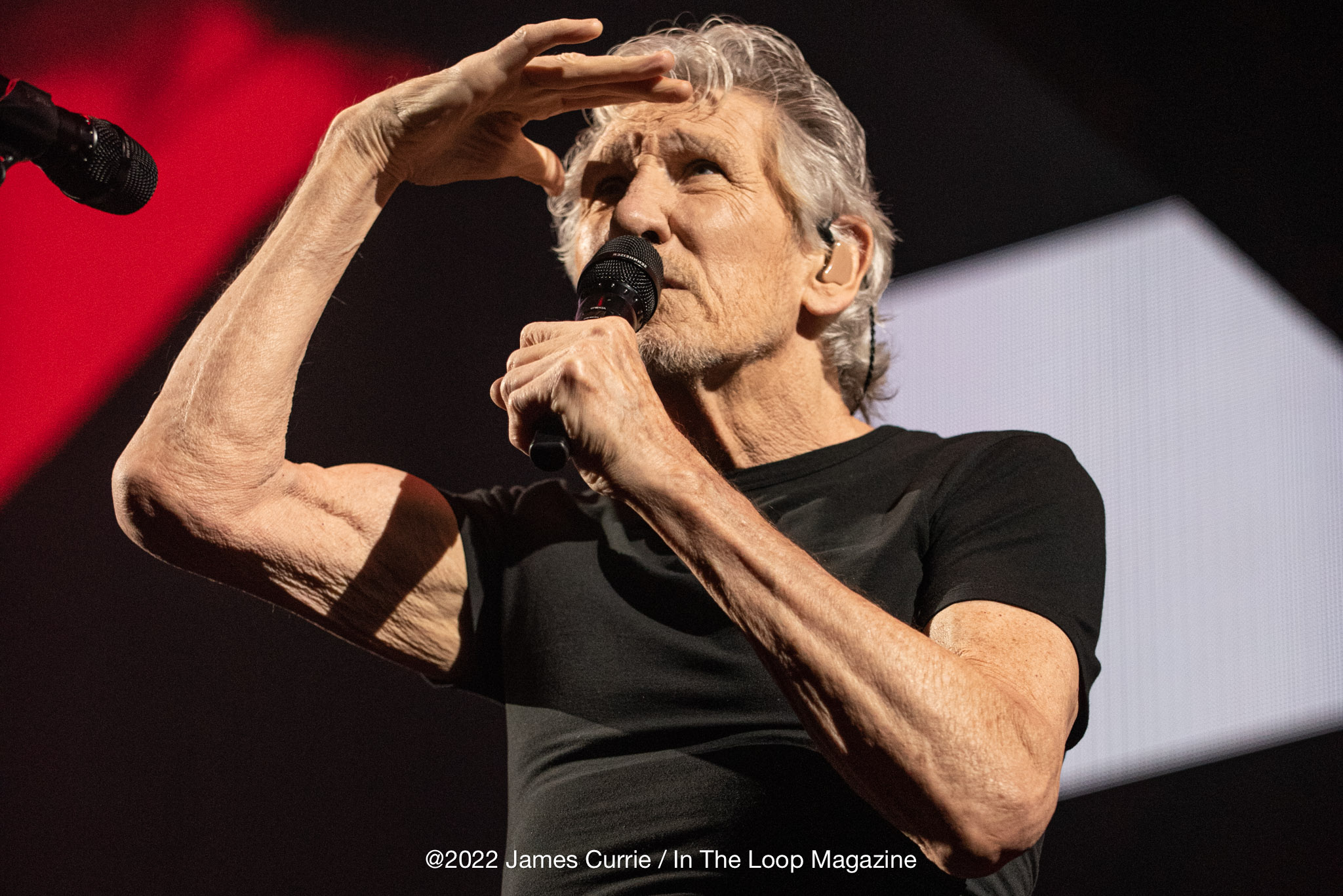 The understated foreshadowing of this statement about halfway though Roger Waters’ set at the United Center on Tuesday offered some context for attendees who perhaps didn’t know the full history of the legendary Pink Floyd, and throughout the night, glimpses into the band’s history appeared as text messages on the massive, X-shaped screens that formed the foundation of the ‘in the round’ approach; it was a goosebump-inducing callback for the faithful die-hards, but it was exactly one of several things that contributed to the overall imbalance of Waters’ current “This is Not a Drill” show.

First off, Waters has set a high-bar for himself with his 2010-12 deep dive into The Wall, surely one of the most ambitious tours of all time, and his 2018 tour, complete with the Animals factory and a stunning, arena-sized Dark Side light prism for the climax would be far and away enough for any band to enter the annals of rock-tour infamy.  And make no mistake – “This is Not A Drill” is a visually stunning, emotionally affecting show, no question; no one outside of perhaps U2 could, at this point in the live music landscape, deliver a show of this caliber.  But perhaps it’s the result of those meticulously constructed tours past that left Tuesday’s show feeling somewhat scattered and unfocused at times.  Waters’ recent material is strong and, as one would expect, heavily political; anyone who would raise a flag on that play has no understanding of Waters’ musical or personal history.  Which is why the spelling out of certain elements via screen-text felt so odd at times; of course Animals was an homage to George Orwell, and most Floyd fans know that Waters has a deeply committed sense of social justice that presides over much of his imagery and lyrics.

It felt, at various points, as though this show didn’t know what it wanted to be.  Was it a Waters/Floyd retrospective at career’s end?  It certainly felt like it at times, from the marching hammer rally of “In the Flesh” calling back the 2012 stadium tour, to the explicitly stated history of the band that played out on the screens and felt like excerpts from a diary, to the suite of tunes from Dark Side of the Moon and Wish You Were Here.  Or was it the pancake stack of political messages from start to finish, with not a free moment to breathe and simply enjoy being at a rock show?  Waters offered a humorous disclaimer at the start, letting fans who weren’t on board with his politics the chance to ‘fuck off to the bar’—given the current political landscape, perhaps this was necessary, though it’s a shame that it had to be.  A nice wink-and-nod to that was the performance of a new tune called “The Bar,” built around the idea of a neighborhood bar as a place of non-judgmental sharing of ideas; the lyrical framework of the arena as a such a meeting place was a great springboard for intimacy, and few artists can achieve this level of bringing a room of any size together.

The politics themselves weren’t the problem; as I said, one would expect this from a long-time champion of human rights.  But the political messages were near nonstop the entire night, with random, confusing images of frightened children and bombs falling during the record-label basher “Have A Cigar,” for example; such imagery and messaging had no place in the song, but it was shoe-horned in anyway.  Why, when so much of the show (mainly Waters’ most recent work) was already so deeply steeped in intensely violent, barbed political commentary?  The visual elements and use of the mega-screens were often lush, dazzling compliments to the music onstage—but at times, they were more of a distraction than an compliment, which was unusual for an artist so seasoned in presenting a cohesive, cinematic live performance.  Unfortunately, it was impossible to ignore that the band was largely the backdrop to the barrage of words upon words, when it really should have been the other way around.

In terms of setlist, “Sheep” was a monstrous, triumphant dip into 1977’s Animals, perhaps Floyd’s best album from a technical standpoint, and “Us and Them” has never felt so effortlessly poignant.  “The Bravery of Being Out of Range” from 1992’s Amused to Death saw Waters at the piano for one of several times throughout the night and came across beautifully, and newer songs like “The Powers That Be” and “Deja Vu” from 2017’s Is This the Life We Really Want fit nicely with some the funkier Floyd material like the backend of “Shine On You Crazy Diamond” and “Money,” which itself was a stunningly missed opportunity to showcase each individual band member on the screens; in fact, the band was mostly absent from the camera feed, which furthered the sense of disconnect in terms of Band vs. Messaging; forget seeing most of the musicians from the highest parts of the arena.  (Case in point: the immensely talented Joey Waronker delivered a perfect set from the drum kit, but his image didn’t appear on screen for more than a few seconds over the course of the night until the literal credits rolled.)

Perhaps it’s because the band wasn’t to be the focus if providing an even more overt platform for Waters’ political grievances was the order of this particular go-round.  Understandable, but one wonders what might have come from a more subtle approach.

The Happiest Days of Our Lives

Another Brick in the Wall, Pt. 2

Another Brick in the Wall, Pt. 3

The Powers That Be

The Bravery of Being Out of Range

Wish You Were Here

Is This the Life We Really Want?

Two Suns in the Sunset