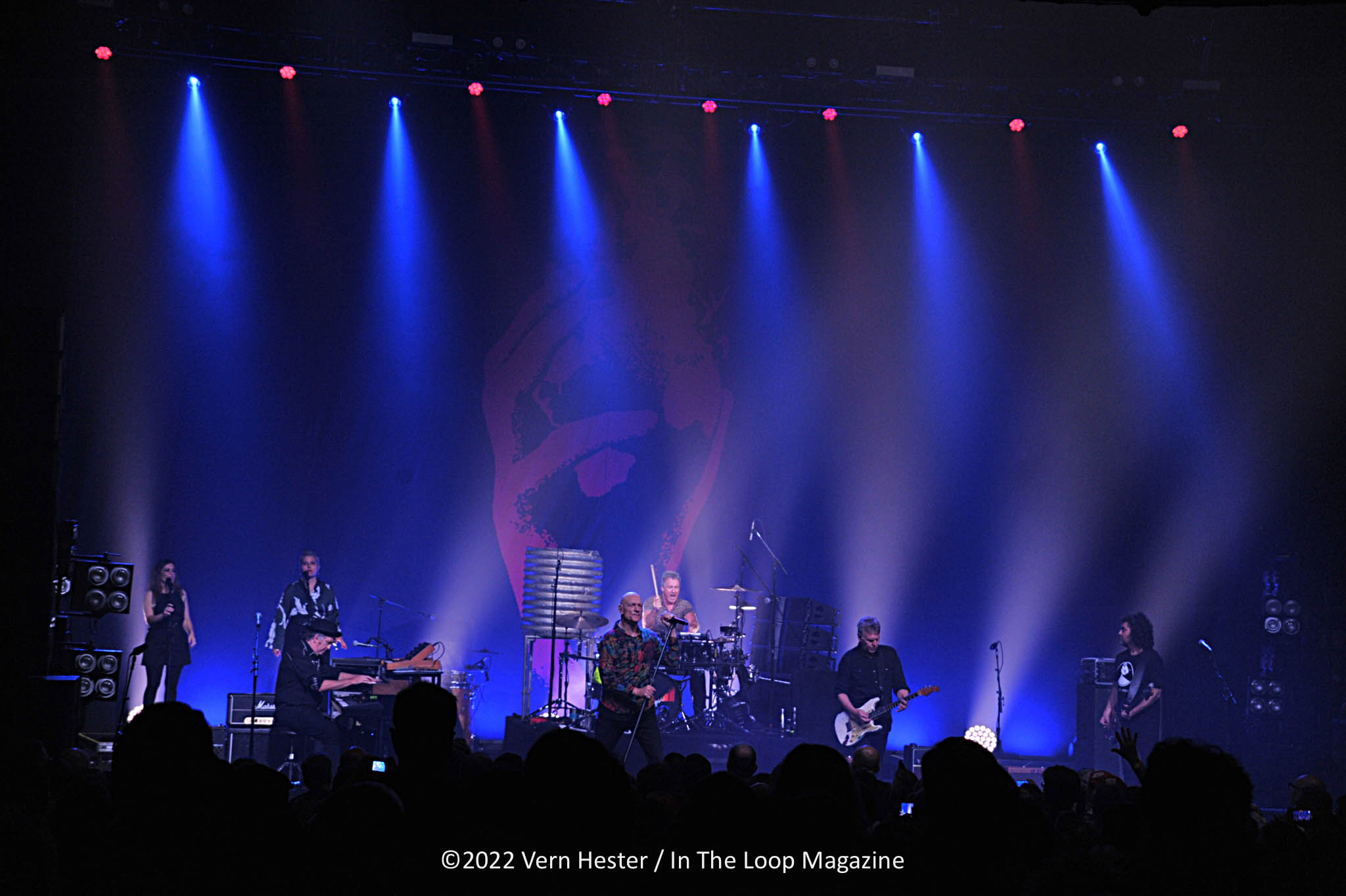 It’s been forty-four years since Australian hard rockers Midnight Oil dropped their debut album [Midnight Oil, 1978 on Columbia Records] and brought an unflinching conscience to rock and roll. Ireland’s U2 may have overshadowed them politically but the Oils [as they are generally called] still grabbed attention with front man Peter Garrett’s trademark lanky 6 foot 4 frame, that glistening bald head, and a reedy yowl that was hard to ignore. Back in 1980 Garrett certainly didn’t look, sing, or dance like anyone we had seen before and the band loved to dress like gas station attendants stranded in some 1950’s version of Route 66. But that was hardly it; Midnight Oil’s sound set them apart with a distinctly savage attack co-mingled with an other worldly beauty that was not only weird but memorable.

Now here we are on June 10, 2022 in Chicago and “Australia’s most important band,” as one recent headline called them, have released their fifteenth and final album [Resist on Columbia Records], reformed for the last time, buried some original members [notably bassist Bones Hillman], conquered Covid-19, and embarked on what they claim is their last tour [they said that before in 2017 but we’ll see]. Early reviews from the tour snipped that this edition of the band had lost their passion and potency but as clearly evidenced in front of a rowdy sold out house last Saturday night at the Riviera Theater those claims are pure unadulterated rubbish.

Daringly kicking off the show with a chunk of Resist [“Nobody’s Child,” “Undercover,” and “The Barka-Darling River”] the band roared out of the gate and the attack seemed aimed at overwhelming the senses rather than impressing them. That Rob Hirst [drums], Jim Mogini [Keyboards/guitar] and newer additions Adam Virtura [on bass] and Martin Rutsey [guitar] locked into a monstrous groove from the get go started the set at an extremely high level which one could assume would be impossible to maintain. Once Midnight Oil dug into their long discography with a searing “Put Down that Weapon,” “Don’t Wanna be the One,” and “Redneck Wonderland” and though there was plenty of mayhem on stage [Garrett jerking about like a spasmed out Frankenstein and the rest of the band pummeling the songs into a  bloody pulp], the real shocker was that they played with a supple finesse unexpected in such a large venue. It certainly did not hurt to have opener Leah Flanagan and Liz Stringer on back-up vocals making this version of the band more like a big band era collective rather than a rock band.

What followed was a generous selection from the band’s output and the songs were clearly meant to reward longtime fans from the outset of Midnight Oil’s career. “Truganini” showed up early, but later “First Nation,” “US Forces,” “Koscinsko,” “Only the Strong,” and “The Power and the Passion” popped up. As expected, there was plenty from the 1988 breakthrough Diesel and Dust [“Dreamland,” a haunting and extended “Whoah,” and of course a thunderous “Beds are Burning”] topped with a meaty portion from their nineties output [“Best of Both Worlds,” “Forgotten Years,” “King of the Mountain,” “Truganini”]. The second encore brought the night to a close with a searing “Dreamworld” and a lilting take on “The Best of Both Worlds.”

Between the setlist which seemed designed to exhaust and feed even the most finicky of long standing fans, Garrett reveled non-stop in what could be his last foray into the rock spotlight. As expected he made some political barbs but this time they were without fangs [global warming, a certain president, two certain prime ministers] but this time out all the headlines and activism took a welcome back seat to the music. Seeing Garrett jerk, twitch, and twirl like an out of control toy top across the stage during “Dreamworld” is a giddy memory I will take to my grave.

“Nobody’s Child”
“Truganini”
“Undercover”
“The Barka-Darling River”
“Put Down that Weapon”
“Don’t Wanna be the One”
“Redneck Wonderland”
“First Nation”
“Gadrial Land”
“The Dead Heart”
“Tarkini”
“US Forces”
“Koscinsko”
“Only the Strong”
“Whoah”
“The Power and the Passion”
“Beds are Burning”
“Forgotten Years”
first encore;
“King of the Mountain”
“Hercules”
second encore;
“Dreamworld”
“Best of Both Worlds”