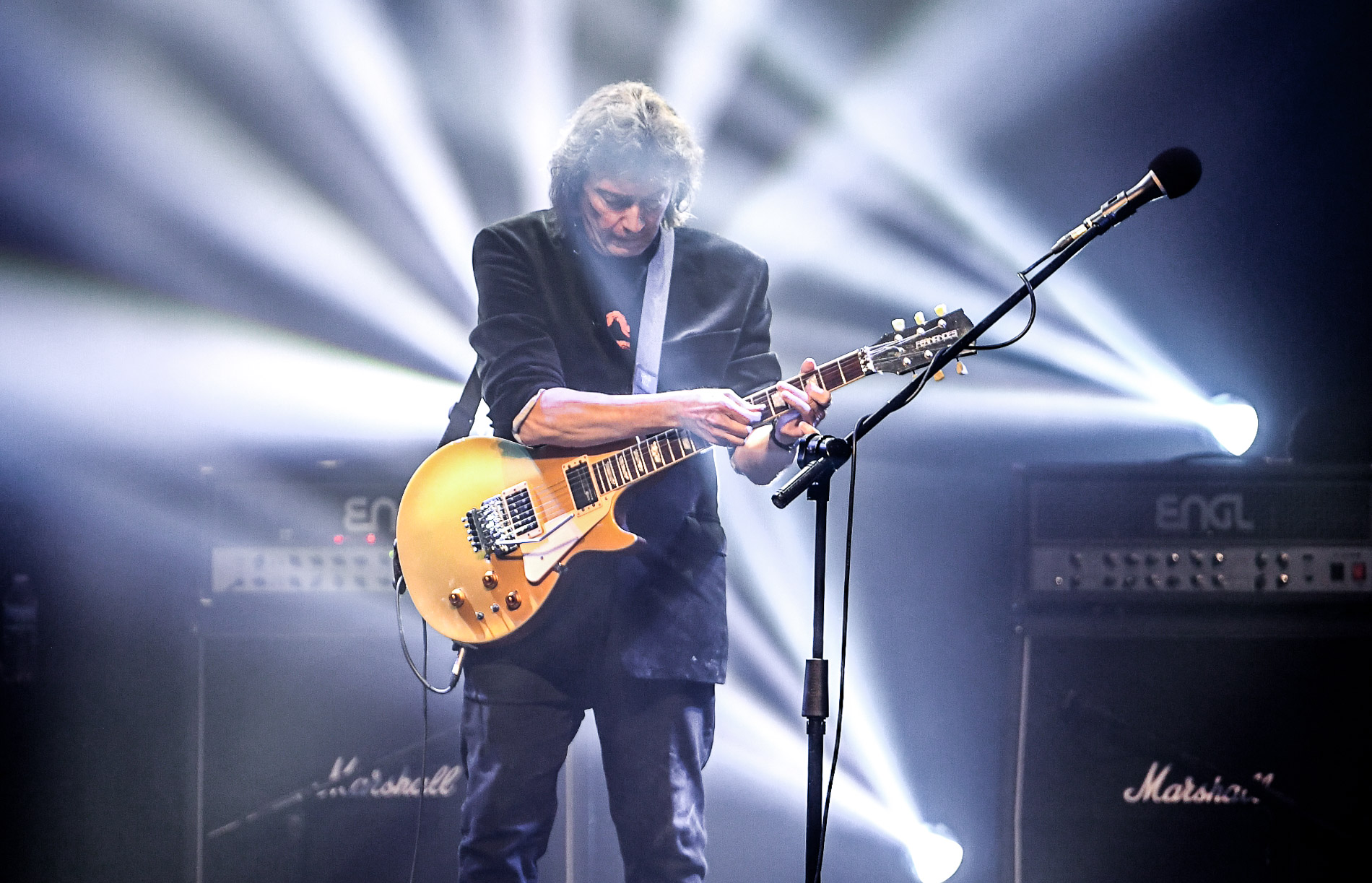 Former brilliant guitarist with Genesis faithfully delivers Genesis classics, plus solo material. It was just a couple of months ago that Steve’s former bandmates were in town, filling huge indoor arenas with their “Farewell Tour”. Not that there’s anything wrong with that- the faithfully devoted to all things “Genesis” will certainly spring for the big bucks to see Phil, Tony and Mike faithfully execute the hits, and then some.

As for me- I couldn’t fathom the idea of photographing them on their farewell tour from the United Center in Chicago, relegated to photograph them from the soundboard at the back of the house. Phil Collins is sitting for crying out loud, and then having to photograph over a hundred heads to get at least one decent shot of Phil sounded troublesome.

I bring this up because meanwhile we have Steve Hackett, former guitarist from said band, performing the classics as well, with a whip smart band that faithfully executes the awesome material, and knows how to improvise at a moments as well.

Steve Hackett’s band is that good. I mean really really good. And to see this current tour, highlighting all things “Seconds Out”- arguably their finest live recording released back in the fall of 1977- is the definition of “can’t miss”. Delivering the album live in its entirety, after a brief set of Steve’s solo material… I mean wowza!

Opening with “Squonk” from Seconds Out- An awesome low keyboard bass thumping tune from “A Trick of the Tail”- this should tell you lots. Most specifically that again, Steve’s band is excellent at playing the tracks faithfully, with not many mistakes (if at all). Not the first time Steve has been around the sun with these guys- they know a thing or to when it comes to the Genesis material, having performed and highlighted various versions of the Genesis back catalog with multiple tours over the years.

So the full versions of these complex songs, from “Carpet Crawlers”, “I Know What I Like (In Your Wardrobe)”, cause much commotion among the faithful in attendance at the sold out Copernicus Center in Chicago. And of course the jaw dropping highlights, such as “Firth of Fifth” and Steve’s amazing and always unforgettable guitar solo, let alone the regalness of all things “Supper’s Ready”, with an expansive standing ovation at the end that had the Copernicus up for grabs with shouts of joy. That moment after “Supper’s Ready” never ceases to amaze, knowing full well that Steve is getting up there in age, but hasn’t lost his magic in complex and heartfelt guitar overtones that touch the soul.

Steve Hackett is a one- of- a- kind – a guitarist savant like none other. Clearly the Chicago Copernicus crowd knows it, everyone within eyeshot riveted at his finesse and unmistakable talent in guitar histrionics. And he makes all of “Supper’s Ready” look so easy, the only awkward moments being the chance to chat with the audience (although sincerely heartfelt), but you kinda sense that these moments are not his thing. The attempt at some humor is cool to watch, with the multiple “Hey Nows” from Steve out to the audience, from the “Larry Sanders Show” and the audience responding back in kind.

If anything, it’s nice to see Steve smile from ear to ear from the reaction he gets back. Nevertheless, Steve Hackett and his band- featuring vocals from Nad Sylvan, Roger King on keyboards, Rob Townsend handling lots of duties, such as saxophone and flute, along with keyboards, percussion and bass pedals, Jonas Reingold on bass and 12 string guitar, and Craig Blundell on drums- they can make a strong claim of truly keeping the fire alive with all things “Genesis”- they are that good. What a celebratory and oh so magical evening.

1: Clocks- The Angel of Mons
2: Held in the Shadows
3: Every Day
4: The Devil’s Cathedral
5: Shadow of the Hierophant