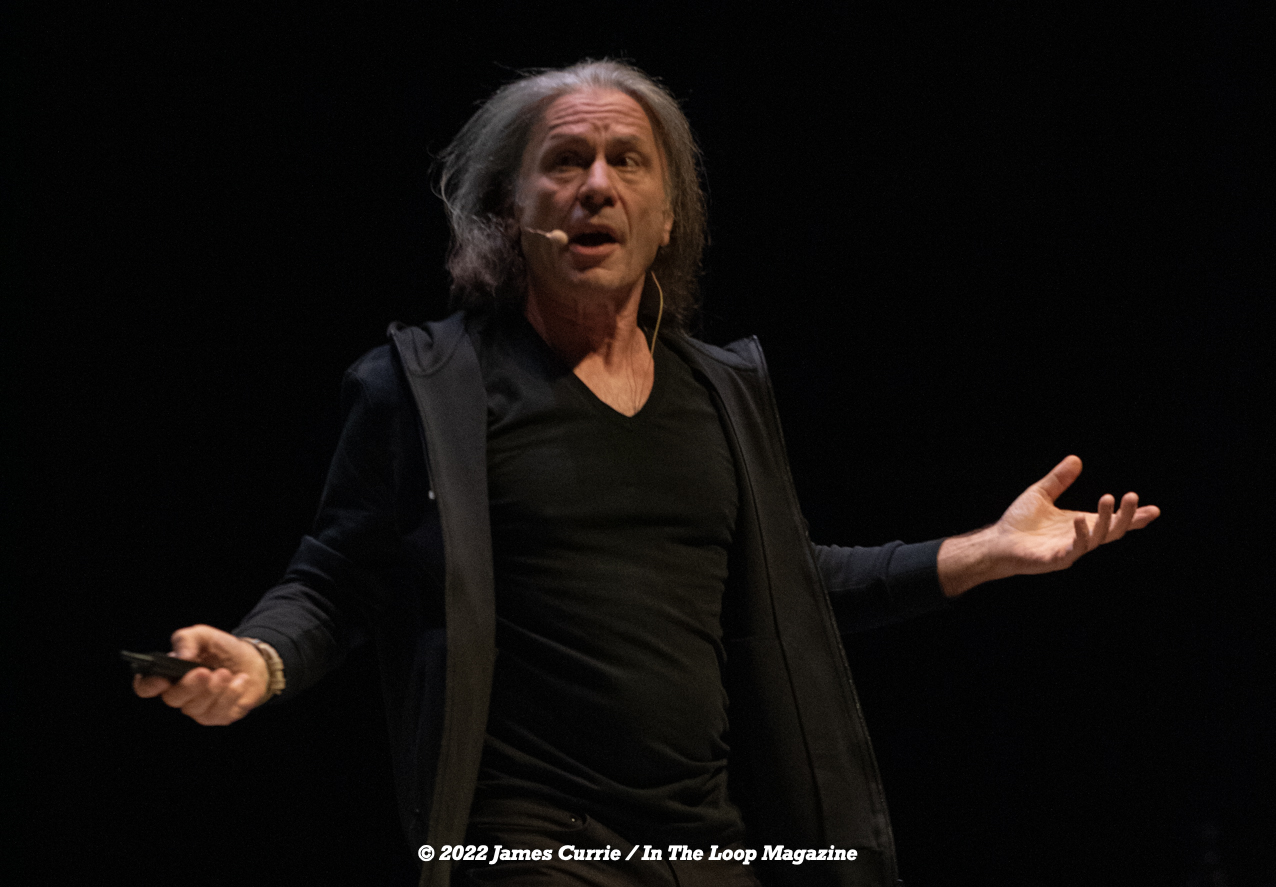 It’s February 2022 and we’re starting the 3rd year of a global pandemic. Most have gone stir crazy and restless to get out since the lockdowns and closures began. This applies to rock icons as well. Such as the case for legendary Heavy Metal vocalist, Bruce Dickinson, front man of Iron Maiden. Despite COVID-19 variants still raging throughout the world, Dickinson has embarked on a three month tour of the States dubbed, An Evening With Bruce Dickinson. Tonight it, along with an un-eased and lightly attended audience, met in Chicago under one roof to let loose and have fun. Dickinson always the ringmaster reassures us that, “Yes, there is a disease out those doors, but in here, we’ll be safe.” It was enough to lighten the mood, gather a few chuckles and settle everyone in for a night of stories that most will never experience.

Dickinson, has accomplished many titles and roles in his life. A storyteller is just another notch under that leather studded belt. He’s also a commercial airline pilot, olympic level fencer, published novelist, a brewmaster, scriptwriter and somehow, so much more.

The first half of the show sees Dickinson giving us his backstory. Growing up in a small town, Worksop, Nottinghamshire the UK. A proper hooligan who caused trouble most of his life. Troubled life in private school and university. At one point, pissing in his headmasters dinner during his tenure at Oundle. And yes, the poor bastard ate it. Something when approached by the school authorities he not only didn’t deny, but relished in his actions with great conviction.

He tells the tale of what got him into heavy rock music – Deep Purple’s “In Rock”. He heard it from a classmates room and soon bought his own used copy and played it to death learning every part of that album, including the scratches. His affection for Deep Purple and more specifically, Ian Gillan came again at University in London, when he worked for the Entertainments Committee. Dickinson found himself in charge of the schools slush fund for hiring entertainment. “So I took all the funds and spent it on hiring in Ian Gillan to play our school.”Said Dickinson. He continued with, “I ended up bankrupting the university for the year with that one gig.”

Another school tale was while he was at University and he was put in charge of the schools entertainment slush fund which he immediately the entire budget on getting Ian Gillan of Deep Purple to come play their school. Dickinson bankrupt the college funds for the entire year on one performance.

Soon after, he began playing drums. Well, bongos at first. In his first band Paradox, later changed to Styx, they played BB King and Beatles covers. After that short lived stint, Dickinson and his new mate recruited two guitarists, a bass player to go along with his bongos. He wasn’t the singer in that band at the beginning as the other was a scholared, technical singer who sang like a choir boy to which he imitated and drew some laughs. He got asked to sign back up chorus parts of a Beatles song, and belted out “Let It Be” and in the true Dickinson vocals that brought him to rock legacy status. He became a full time singer from that point on.

The stories continued with more tales from the starter stage days. Interesting tales about playing the small bars and pubs in England and his run ins with the locals. One day some guys from the band Sampson came to one of his gigs and asked him to join their band as their singer. Something he was not yet doing full time for any band full time. He agreed and spent the better part of a decade touring with them in their van. Something else he’d never done up until that point. Oh, and that they actually paid him.

First time drug experiences were exposed from life on the road. Dickinson said, “Of course I knew about drugs, but being from the small town I never actually saw them, smelled them or much less tried them.” That all changed fast with his new life on the road and only added fuel to his hellion fire.

Eventually we get to his introduction to Iron Maiden. We get the inside scoop to what life was like in the beginning, both highs and lows. How he saw Iron Maiden opening for a show he was in and saying, “That’s the band I want to be in.” A year later, he was asked by Iron Maiden’s management to audition for the band. He did and immediately became the metal vocalist we know today.

Dickinson also touched on his battle with cancer and how he fought it as hard as anything else difficult in his life. Throughout the night, performing impersonations of characters in life that also included singing proving despite having a major medical issue that could possibly alter his voice, did not.

Some of the fun stories we got where the behind the scenes details about clothing choices. Dickinson said on one particular pair of pants he had custom made, “I had this idea of a dead green skinned alien and wanted to know what it would look like to skin it and make pants from the shiny scales.” This was followed by pictures of some pretty gaudy outfits on the slide screen that only Dickinson could pull off. Fashion was really a stopping point for discussion for Dickinson. He lamented on how they wore wild cloths, especially spandex, and how those really showed off his “fruits and vegetables” as the band called the trouser bulge. That bulge is something he’s very proud saying, “We didn’t think of hi definition photos back then, but today, don’t mind, it’s all me in there.”

Dickinson went on with other tales about how they, Iron Maiden, were early adopters of technology for live performances with giant inflatables, puppets, set pieces, lighting and other props. The things they’ve become known for and so many others have copied.

Dickinson’s comic delivery worked through this one act rock-lore play. His satirical take on sometimes serious moments came off genuine and from the heart. He was animated and kept moving about the stage as much as the stories change. He was just as comfortable on stage by himself as with his bandmates behind him.

About an hour and half after the start, Dickinson ended his tale with a video, The Writing on the Wall. This transitioned the evening into the second half, the Q&A. Audience members were offered the chance to ask any question they wanted from fill in the blank cards sitting at the entrance when they walked in. Select questions were chosen and address as only Bruce Dickinson knows how – uncensored and direct. Taking off the cuff questions from the Chicago audience with a wide range of topics.

I don’t think anyone minded there was a global pandemic happening outside as he kept the laughter going and ears perked from the scandalous details that were revealed as only someone like Bruce Dickinson could give.

For photos from the show at The Vic Theatre in Chicago, click here