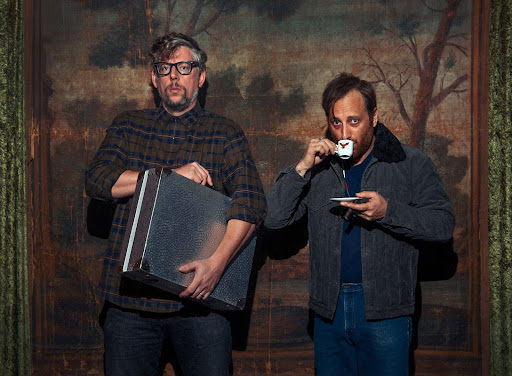 January 31, 2022 – The Black Keys have announced initial details for their Dropout Boogie tour, a 32-date North American run produced by Live Nation beginning July 9 in Las Vegas. This is the band’s first string of shows since touring in support of their 2019 studio album “Let’s Rock” (Nonesuch).

Band Of Horses will support on all dates, while Ceramic Animal (July 9-30), Early James (Aug. 24-Sept. 9) and the Velveteers (Oct. 2-18) will open at select performances.

Citi is the official card of the Dropout Boogie tour. Citi cardmembers will have access to presale tickets beginning Wednesday, Feb 2 at 10 am local time until Thursday, Feb 3 at 10 pm local time through the Citi Entertainment program. For complete presale details visit www.citientertainment.com.

The Black Keys are singer/guitarist Dan Auerbach and drummer Patrick Carney. Last year, the duo received its 14th Grammy nomination, this time for Best Contemporary Blues Album for Delta Kream, which was released in May 2021 by Nonesuch Records. The project, which features 11 Mississippi hill country blues songs by artists such as R.L. Burnside and Junior Kimbrough, was the band’s fifth consecutive top 10 debut on The Billboard 200. Pitchfork said of the album, “By spending the time playing the blues that’s buried deep in their soul, the Black Keys reveal how far they’ve gone in a space of 20 years,” while the UK’s Independent said, “The blues flow through The Black Keys’ music as steady as the Mississippi River. Now they’re going right to the source on Delta Kream, a sweltering collection of some of their favourite hill country blues standards. The fact they’re exploring such familiar territory is to the album’s benefit. The Black Keys know this music as well as their own. Delta Kream celebrates true musicianship. A soundtrack for those hot and heady nights of late summer. It’s brilliant.” Delta Kream also made Best of 2021 lists from several publications, including both Uncut and Mojo.

Most recently, The Black Keys released the Super Deluxe 10th anniversary edition of their landmark seventh studio album, El Camino in late 2021. El Camino was produced by Danger Mouse and The Black Keys and was recorded in the band’s then-new hometown of Nashville during the spring of 2011. The Black Keys won three awards at the 55th annual Grammys for El Camino—Best Rock Performance, Best Rock Song, and Best Rock Album—among other worldwide accolades.

Formed in Akron, Ohio in 2001, The Black Keys have been called “rock royalty” by the Associated Press and “one of the best rock ‘n’ roll bands on the planet” by Uncut. Cutting their teeth playing small clubs, the band have gone on to sell out arena tours and have released nine previous studio albums: their debut The Big Come Up (2002), followed by Thickfreakness (2003) and Rubber Factory (2004), along with their releases on Nonesuch Records, Magic Potion (2006), Attack & Release (2008), Brothers (2010), El Camino(2011), Turn Blue (2014) and “Let’s Rock” (2019), plus a 10th anniversary edition of Brothers (2020).The band has won six Grammy Awards and a BRIT and headlined festivals in North America, South America, Mexico, Australia, and Europe.