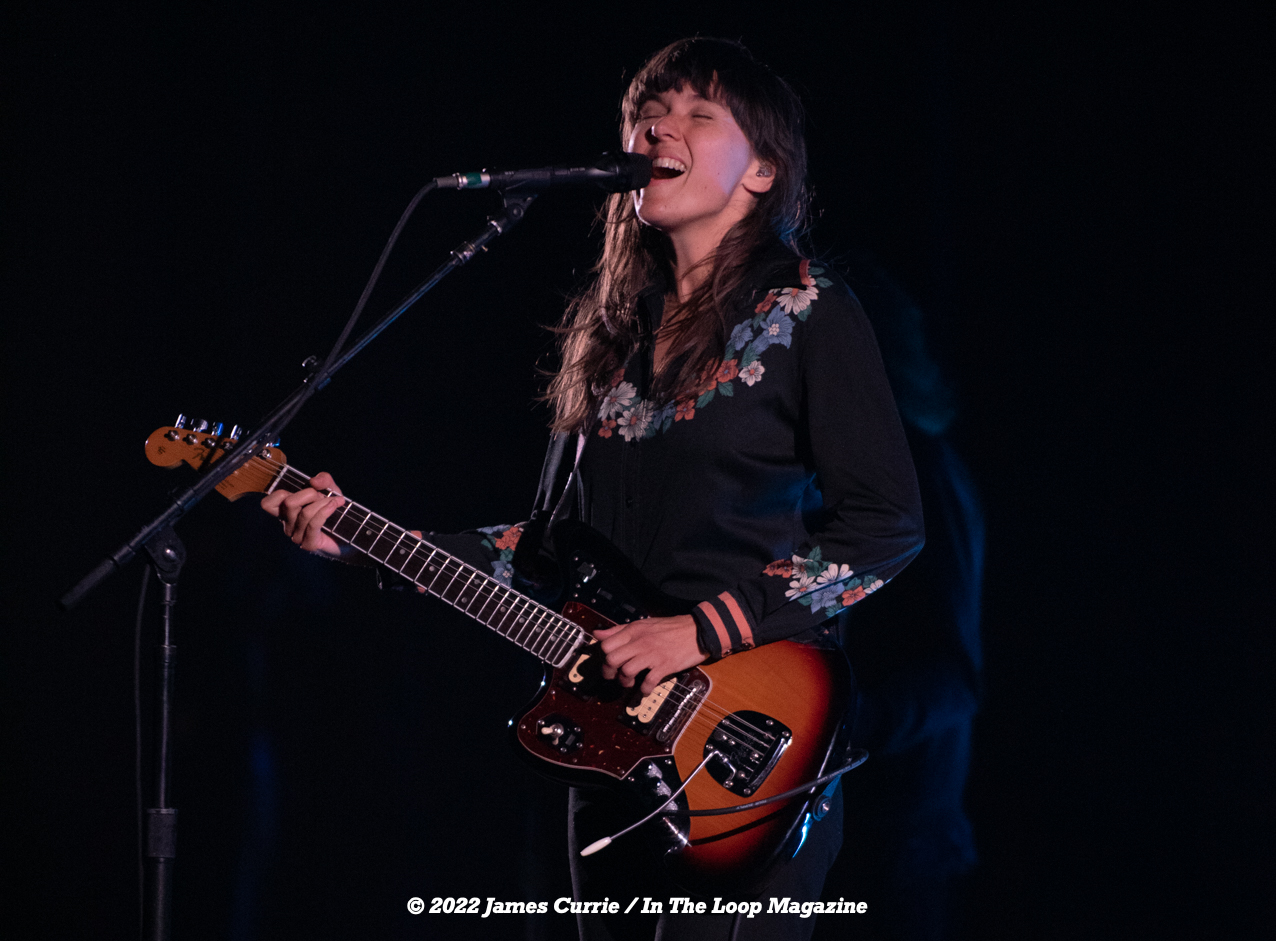 Tonight, Australian Indie artist, Courtney Barnett played Chicago’s iconic State Street venue, The Chicago Theatre. A big move from her start just under a decade ago where she played small clubs to a handful of people, had no airplay besides college radio and only an E.P. under her belt. Tonights performance really showcased her progression as an artist and road scholar.

Her most recent release, “Things Take Time, Take Time” (Milk! Records) (2021) was produced during the global pandemic known as COVID-19. The fact that she created this during the pandemic isn’t unusual, but what is, is that she’s touring during this event. Being from Australia, a country known for taking this disease pretty serious, traveling outside the land down under is a risk, but as we’ve come to know Barnett, one that she must take. Barnett’s not a home body. She doesn’t sit still very long with recordings or touring. As a matter of fact, if you look at her track record, she’s playing out live more than sitting at home.

This show, like most shows that are taking place during COVID, is playing it safe and happening with guidelines set forth by the CDC and local regulations making it the safest possible. Masks, vaccination cards and other government mandates and protocols put into effect as we settle in for the show.

The show opens with Cassandra Jenkins, as last minute fill in as original opener Julia Jacklin was no longer on the bill. Jenkins, a solo artist, stood center stage bathed in warm lights in her flowing, ruffled dress, strumming a guitar and singing her heartfelt ballads. At one break in the begging, she addressed the audience and introduced herself and offered her apologies for not being Jacklin.

After Jenkins, Courtney Barnett started off with her current hit, “Rae Street”. The opening track from her new album and latest music video single. Tonight, we find Courtney Barnett and her band on a stage washed in low blue lights with white streaming banners hung in the rear. Also, backing the stage were floor lamps that resembled a living room. Barnett’s wardrobe was different this time around. Much more of a fit for playing such a venue. A black one piece suit with floral embroidered lapels and sleeves with two golden stripes at the ends. In keeping with her past image, still stomping around in her black Doc Martin boots.

Courtney’s band is the same as it’s been for years, plus the addition of her producer and friend, Stella Mozgawa who help create her latest album. It’s a little strange seeing Barnett’s band larger than her normal three piece. She has had other musicians fill in on backing guitars, percussion and keyboards in the past, but this has been a new constant verses random musicians. Mozgawa brings a new depth to the sound that really ads a new dimension and fuller sound to the band. Also back with Barnett are long time mates, Bones Sloane on bass and backing vocals and Dave Mudie holding the beat down on drums.

Together, they played through eighteen songs tonight including many new tracks off, “Things Take Time, Take Time” like “Sunfair Sundown”, “Turning Green” and “Oh The Night”. A few songs into the night, Barnett breaks out the song that put her on the map, “Avant Gardener”. Reminding fans what started their love affair with the Australian Indie darling. That’s not to say the night went unscathed. There were a few hiccups like during “Lance Jr” where she forgot a verse or how she had to redo “If I Don’t Hear From You Tonight”. But these are reasons why we love Courtney Barnett. She’s real. She’s human. It’s part of her quirk. She ended the night with “Before You Gotta Go”.

For more info on Courtney Barnett and the current tour, click here