One Night Only, House of Wax, Industrial Accident: The Story of Wax Trax! Records With Live Artist Commentary At House of Vans 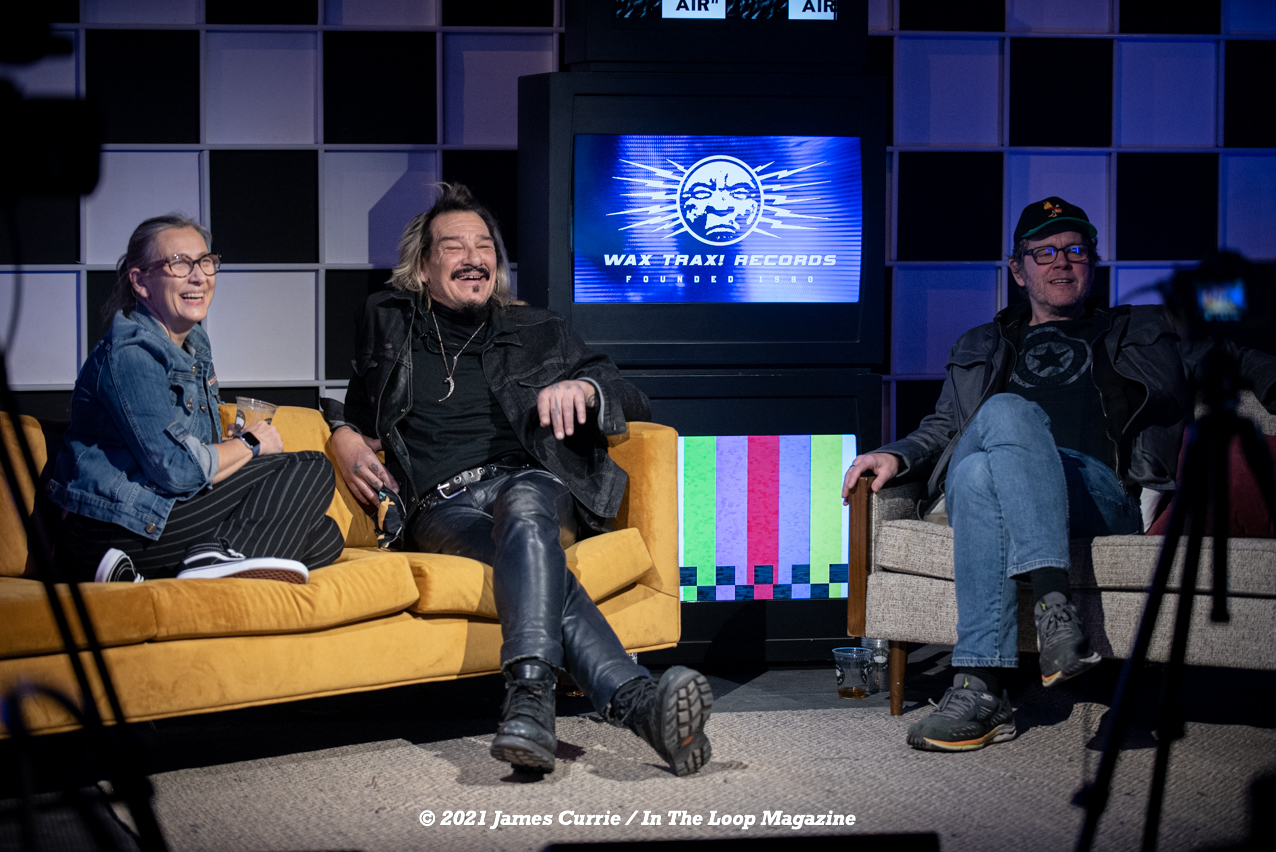 An intimate, in person showing with global livestream event, Industrial Accident: The Story of Wax Trax! Records took place tonight at the House of Vans in Chicago. Covid safety protocols in place. Vaccination cards checked at the door. Cavernous room with spaced seating throughout and masks required to attend. This event was taking all the precautions to make sure Chicago Industrial music fans of the mighty label could congregate together to celebrate this documentary and its film makers safely. For the rest who couldn’t make it, a free online stream to follow simultaneously.

Tonight was a completely stripped down Wax Trax! screening event unlike any other before. Set in a big open spacious hall with open rafters and low light, the Industrial themed movie was happening live on the west side of Chicago. The audience comprised of former Wax Trax Records patrons, personal friends and uber Industrial music fans sat spaced out on their own with plenty of social distancing in place as they waited for the show to begin.

This event is in promotion to the films released to streaming service on Amazon Prime called, the CODA Collection. On there, you will see the full documentary, but also a ton of new footage filmed behind the scenes and bonus to the feature film. These are not scene anywhere before unless you bought a physical copy of the DVD or Blu-Ray.

The live event kicks off with emcee’s Mike O’Connell and Herb Rosen (Rights of the Accused, Liar’s Club) who came out on stage and introduced the night claiming, “Alright right, we finally get to do this thing live!” continuing with, “Even though everybody’s sitting six feet apart, wearing masks and being weird, we get to do something around other motherfucking people! So if anybody’s ever seen us before, it’s just as dumb in person, actually, it’s going to be even stupider (is that a word?). We’re going to try and do like a Mystery Science Theatre thing and we’ve got Julia (Nash) and Frankie (Nardiello) plus Chris Connelly and Andy (Wombwell) there all going to be over there (points to side room in the back) making comments throughout this and I’m sure it’s going to be the dumbest shit you’ve ever heard. It’ll be fun.” And that sets the tone for the event as it kicks off with the film and ensued commentary.

In a side room set up as a tv studio for House of Van’s Ch. 66, two couches flanked the checkerboard room. Film director Julia Nash (director, daughter of Jim Nash) and Frankie Nardiello (former record store employee and My Life With The Thrill Kill Kult front man) sit across from Chris Connelly (also former Wax Trax employee and musician of a dozen or more bands) and Andy Wombwell (yes, you guest it, another long time employee and confidant). The movie starts and they jump into conversations about the scenes of the images playing before them. A behind the scenes, personal, bonus insight to the film and its life and times.

The event is being done two ways, both this live and in person screening as well as a livestream feed on Twitch.  The audience sees the movie in person while speakers in the room amplify the panels discussions over it. The rest of the world gets to watch along live with the film and a picture in picture of the panelists discussions. In person was limited and due to COVID-19 concerns was even harder to get in as the physical body numbers reached only about 30-40 people to fill the seats under House of Van’s great hall.

The highlights of this night are hearing stories about the early days of working at Wax Trax Records, knowing Jim and Danny, gentile ribbing on fashion choices and starting out in the band scene. Frankie is the jokester in this group throwing out wisecracks about certain scenes and issues he had with former bandmates and employees done mostly in tongue in cheek. When one scene from the movie played featuring a Ministry concert clip, we are shocked (again) to see Al Jourgensen cutting himself with razor blades bleeding all over the stage. Frankie’s response, a low keyed, “This is when we should have put the kids in the car”. Other tales came about from groupies they met on the road and brought back to Chicago. And we learned they ended up staying for a year or more and no one knew how to get rid of them. He also talked about his relationship with Jim and Danny that started when he was in his early 20’s.

Chris is smooth and keeps cool about the relationships he built. Even he was surprised to hear stories he didn’t know about from back in the day and smiling the whole time about the good old days of Wax Trax! Records. Old photos of working in the store or hanging with the bands would pop up he would tell the backstory to them and not hold back from incriminating details. We also heard a story about the time a Japanese gentleman came in to the store and tried to solicit his book, but it was all in Japanese and he didn’t any speak English. Confused, they all just kindly nodded and the man went into the bathroom and did a ton of coke and then walked out.

Andy talked about how Jim would never criticize their music choices or sales numbers. He liked and believed in the bands he had and promoted no matter what. He gave the insight most have never heard. The personal retail side of daily life working at Wax Trax! Records. He also talked about some of the darker days of working there and how some were more difficult to work with than others. He gave other tales about his first day of work when the phone rang and he answered it, but couldn’t hear them because the music was too loud, so he hung up on them. Liz (employee/manager) told him that’s ok, if it was important, they’d call back. These were the stories that really shaped what it was like to live and work in that scene at that time.

Julia is a gatekeeper. She negotiates conversations between the panelist with stories about her fathers legacy and what it was like growing up in the house of Wax. She calls out the good and bad. She brings the passion and emotion proving this wasn’t just a home movie she made, but a family reel of her life and times that her dad, his friends and the musicians that defined a generation created. She even laments a funny story about someone with a strange looking genitalia who, when they played live on stage, would be in their boxer shorts and “stir the mushrooms” around letting anyone within an eye shot see the oddities. The whole time she was up there, she had a smile. This project was a long hard journey to get done. Tonight was a kind of relieve. This film has taken on a life of its own now and she’s joining along with others on the ride.

The night ends like old friends hanging out at the corner bar reminiscing on good times going home. The panelist tone comes down and they speak fondly of the “trax” they traveled. Frankie, Chris, Julia and Andy then leave the studio and head to the stage for a live Q&A with the house guests and online.

Tonight’s event wasn’t just a showing of the film they made about the record industry and genre they helped create, but the bonds they made that last til these days. These are folks who’ve been through many highs and lows, and then back again. Tonight was fun. It was relaxed. There were no merch booths. No live music. No circus. It was stripped down to the core of what they created. It was friends hanging out and having fun.

This group shaped a music genre that has only grown more popular thought out the years, but grown into something new with sub genres and new relationships that revolved around their original spawn. A multi-generational love fest of all things Wax Trax! Records. There are no crazed egos in this Wax Trax family, no mega millionaires who are above the home-brew, DIY Chicago tie. They are unique, true and every bit as important as any cultural leaders in their own right. And witnessing this tonight proves their worth in the music industry, a Chicago staple and beyond.

For more about the film, Industrial Accident: The Story of Wax Trax! Records, click here

For more photos from this event at House of Van’s, click here