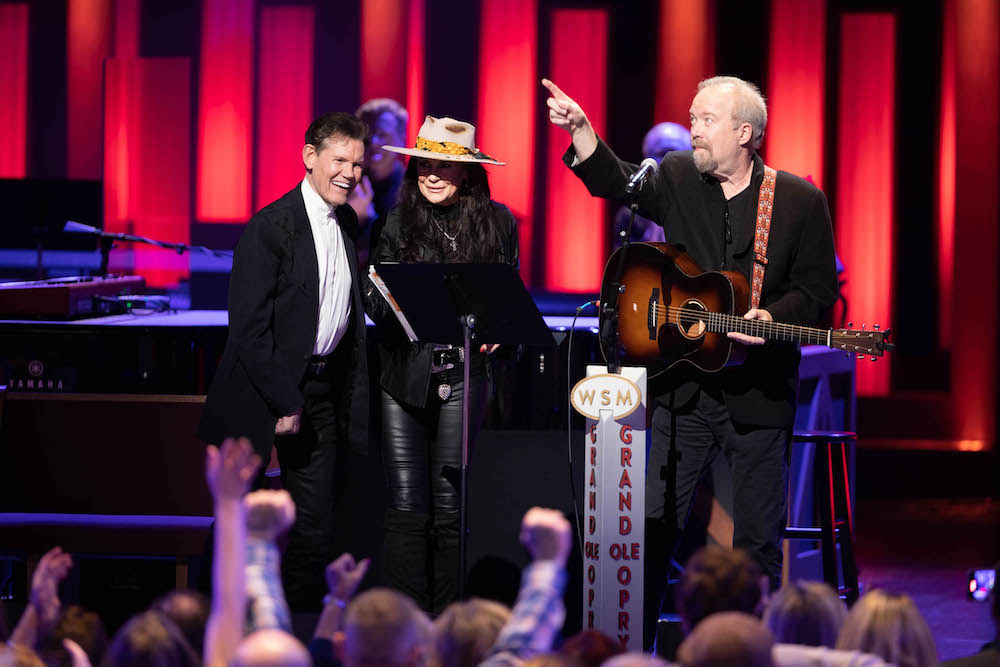 NASHVILLE, Tenn. (December 13, 2021) – Randy Travis made a very special appearance at the Grand Ole Opry on Saturday night to celebrate his 35th Anniversary as a member. The Opry’s lineup for the evening included country music stars Jon Pardi, Old Crow Medicine Show, Carly Pearce and longtime Travis collaborator, Don Schlitz. The night only got sweeter when Warner Music’s Cris Lacy, Executive Vice President, A&R, and Brette Moseley, Catalog Manager, presented Randy with a plaque to commemorate the RIAA Gold, Platinum and Multi-Platinum certifications of more than 21 million combined copies of his Warner Music catalog along with recognizing his 1.6 billion global streams. Watch the segment on the Opry’s YouTube here.

Randy Travis was first introduced on the Grand Ole Opry stage by Little Jimmy Dickens in March of 1986 while still a cook at the Nashville Palace. After releasing his debut Storms of Life that Summer to major success, he was officially inducted as a member on December 20, 1986 at the age of 27.

Randy has had quite the year. Aside from celebrating this monumental occasion, Randy was named Artist of a Lifetime by CMT presented by Garth Brooks and Kane Brown and celebrated the 35th Anniversary of his debut LP, Storms of Life, with a remastered release featuring brand new songs from the vault.

About Randy Travis
With lifetime sales in excess of 25 million, Randy Travis is one of the biggest multi-genre record sellers of all time and a recent inductee into the Country Music Hall of Fame class of 2016. His honors include seven Grammy Awards, 11 Academy of Country Music statuettes, 10 American Music Awards, two People’s Choice awards, seven Music City News awards, eight Dove Awards from the Gospel Music Association and five Country Music Association honors. In addition, three of his performances earned CMA Song of the Year honors: “On the Other Hand” (1986), “Forever and Ever Amen” (1987) and “Three Wooden Crosses” (2002). To date, he has 23 No. 1 singles, 31 Top-10 smashes and more than 40 appearances in feature films and television shows to his credit. Four of his albums are Gold Records. Four are Platinum. One has gone Double Platinum. One is Triple Platinum and another is Quintuple Platinum. In 2004, Randy was honored with his own star in the Hollywood Walk of Fame and is honored on the Music City Walk of Fame in Nashville, TN. He has been a member of the cast of the Grand Ole Opry since 1986. In 2017, Randy was honored with a wax figure at Madame Tussauds™ Nashville. Since his near fatal stroke in 2013, with the help of his wife Mary and rigorous physical therapy, Randy continues to make improvements in his speaking, walking, and yes, singing. With the help of author Ken Abraham, he released his critically-acclaimed memoir in 2019, Forever and Ever, Amen. Today, Randy is looking forward to releasing the remastering of his historic debut album Storms Of Life (35th Anniversary Deluxe Edition) in September 2021. For more information please visit RandyTravis.com.