Chicago’s Own, Rise Against, Close Out Their Official Headlining Tour At Home On The Lakefront 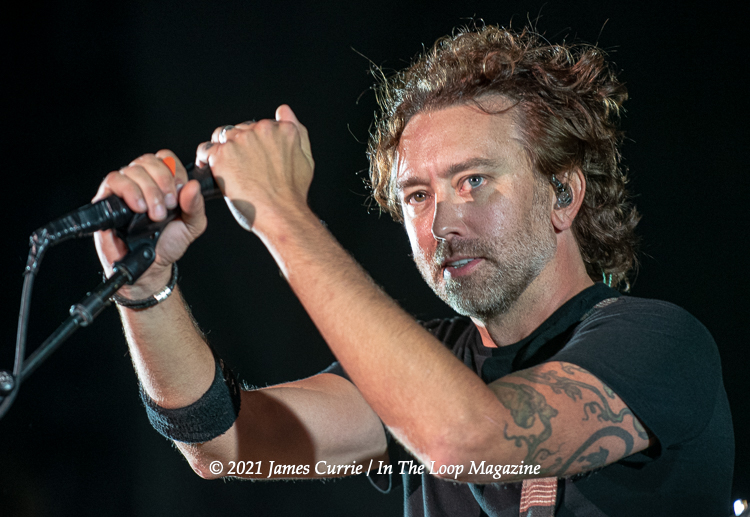 Rise Against have been a mainstay in Chicago music scene for over two decades. This year marks the bands 20th anniversary of making records as they released their debut full length album “The Unraveling” (Fat Chord Records, 2001). This year, we get the return of Rise Against, who had plans for a 2020 tour but that was side tracked like everyone else due to COVID-19, with a new album dubbed, “Nowhere Generation” (Loma Vista Recordings, 2021). This also marks their 9th full length studio album.

Tonight was another hot and steamy night in Chicago. The weather has been relentless for days with 90+ degree temperatures and high humidity making it feel like the 100’s. But that didn’t stop fans from coming out, even with COVID restrictions in effect that included showing proof of your vaccination or negative COVID test and face masks requested.

This tour included openers Philly based, The Menzingers performing tracks off their latest release, “Hello Exile” and living Punk Rock legends, Descendents as they too have released a new album this year, “9th & Walnut”, filled with tracks off their early days featuring classic line up recordings from the late 70’s.

The Descendents, starting a few minutes early, and whimsical as ever, kicked off their set, literally, as Milo came riding out on a fold up bicycle. This, backed by the sound effects of a roaring Harley Davidson, mimicking the classic Judas Priest Rob Halford concert live experience before tearing into a 25 song blistering set. Starting off with “Sailor’s Choice”, the Punk legends from Manhattan Beach, CA ripped up classic tracks spanning their forty year career barely stopping to give fans a chance to give praise. Milo is so animated and intense, running around the stage barely taking a break.  What helps is he has a water bottle strapped to his side the entire set. Songs burn through the steamy night air sometimes in just seconds with bangers like, “I Wanna Beer”, “My Dad Sucks”, “Coolidge”, “Everything Sux” and ending with “Smile”. One of the few stops during the show was to make a slight social comment on masks. Milo reached for a face mask, put it on and said, “I fucking hate wearing these things.” but not getting a welcoming call back from the fans, quickly added, “But we gotta wear them so…”

All during the Descendents set, a pit swirled like a living whirlpool in front of the stage. As the last song was winding down, one of the moshers broke from the circle. A short, shirtless young man with long flowing blonde locs ran through the crowd like a wild gazelle weaving and bobbing with no hesitations. Shortly after, paramedics followed through the same path to the heart of the pit.

After getting about a half an hour rest, the fans where welcomed by an intro from 101.1 WKQX radio darling Lauren O’Neil who introde Rise Against like a 90’s hype man (woman) welcoming the boys home. Zach Blair, Joe Principe, Brandon Barnes ran out through stacks of pillared television sets displaying various war scenes, graphics and words for the latest album. When the video intro completed, Tim Mclirath took center stage and took command until the end.

Rise Against are touring on this headlining gig that was supposed to be last year, but that delay may actually have helped as the new music produced for “Nowhere Generation” is smart, aggressive and poignant as a pandemic scribe should be, highlighting modern revolution calls for all to be alert of.

Kicking off the set was the opening track off “Nowhere Generation”, “The Numbers” as well as three others off the new album. McIlrath making connections on stage with the front row and cheap sets alike with numerous “Thank you’s” and stories about what life was like during the shut down. “I can’t believe we’re back! How many thought this would never happen again?”, McIlrath said, “For how many of you is this your first concert back since this all went down?” Almost half the audience raised their hands in response. He continued with, “With the time off we had last year we thought a lot about things and they became songs. Broken Dreams. These songs (they played throughout the night) have taken on new meaning for us these past couple years.”

This may mark Rise Against’s end of their headlining tour, but they will be out at various festivals throughout the year including at our neighbors to the north with Summerfest.

For photos of the show, click here for Rise Against

For photos of the show, click here for Descendents