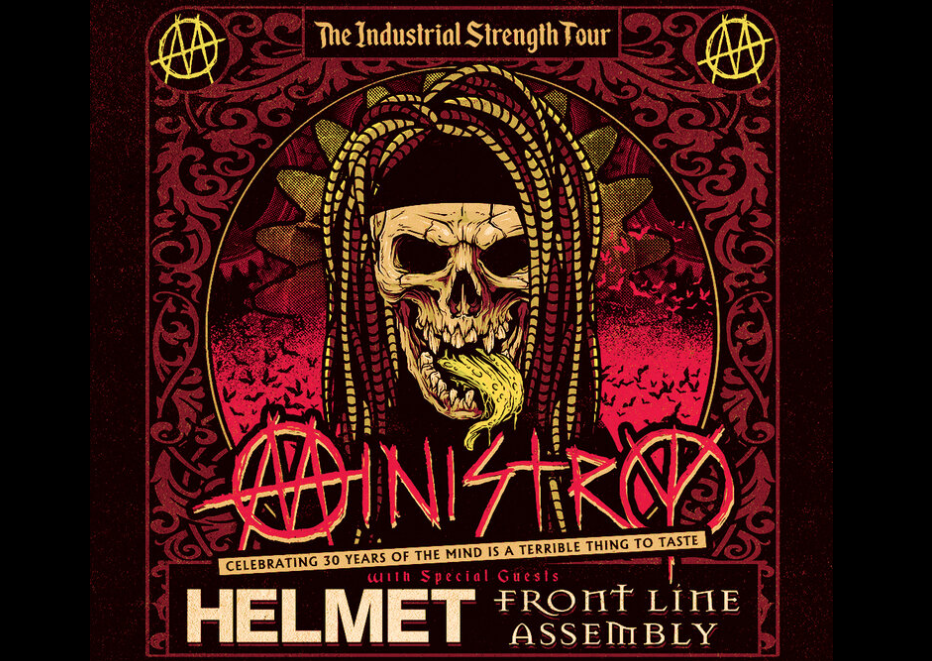 The Mind Is A Terrible Thing To Taste

Refunds Available At Point Of Purchase

Ministry will be moving forward with the much anticipated Industrial Strength Tour, today announcing that the previously announced spring dates have now been moved to October and November 2021 to allow additional time for COVID-19 restrictions to be lifted as the country nears towards more normalcy this fall.

The new dates will kick off October 3, 2021 in Albuquerque and run through November 3, 2021 in Seattle, hitting all the previously announced markets except Pittsburgh, PA and Missoula, MT which unfortunately have been canceled and Baltimore, MD which will be postponed for a later date. The Buffalo, NY show has moved to a new venue and previous ticket purchases will be honored. And an additional show date has been added for Charlotte, NC that will go on sale Monday, March 22 at 10 am ET.

The tour’s special guests Front Line Assembly remain on the lineup for this one-of-a-kind celebration alongside newly announced support act Helmet. This special tour honors not only the 40th anniversary of Ministry in 2021 but also the 30thanniversary of revolutionary album The Mind Is A Terrible Thing To Taste and will also include brand-new material from Ministry’s upcoming 15th studio album. Due to the uncertainty of COVID-19 protocols for visas, travel and vaccine distribution in Germany as well as immigration uncertainty, KMFDM will regrettably not be taking part in this tour.

Says Ministry founder Al Jourgensen, “With current COVID-19 restrictions, we are forced to again move our scheduled March/April 2021 U.S. tour to October/November 2021 and hoping normalcy returns by then. With vaccinations and better care happening, we all feel the fall is realistic. We can’t wait to get out there and play not only The Mind Is A Terrible Thing To Tastematerial for you all but some stuff off our new album as well. Stay safe and see you in the fall!”

The full list of new, confirmed tour dates are below. All original tickets will be honored for the rescheduled dates in October and November; or, ticketholders can receive refunds at the point of purchase. Fans are being asked to check with their local markets and venues for new ticket purchases. All of the information can also be found at www.ministryband.com/tour.

*indicates a new date not included on the original run

**indicates a venue change from the original run

***indicates a date where Helmet will not be appearing

ABOUT MINISTRY
Born in 1981 in Chicago, Ministry has been the lifetime passion project of founder Al Jourgensen, considered to be the pioneer of industrial music. In its early days, Ministry was identifiable by its heavy synth-pop material in line with the new sounds and technology that were being developed in the ‘80s. Ministry’s output began with four 12” singles on Wax Trax! Records in 1981 before the first LP With Sympathy in 1983 via Arista Records. As time progressed however, so did Ministry, quickly developing a harsher, and more stylized sound that the band soon became infamous for on seminal albums Twitch (1986), The Land of Rape and Honey (1988), and The Mind Is A Terrible Thing To Taste (1989). With the release of Psalm 69: The Way to Succeed and The Way to Suck Eggs (1992), Ministry hit an all time high in the mainstream musical realm and received its first Grammy nomination. In total, Ministry has been nominated for a Grammy award six times. Eight more albums would follow before an indefinite break in 2013, only to be unearthed again in 2018 with AmeriKKKant, continuing to reflect Jourgensen’s views on the frightening state of society and politics. Today, Ministry continues touring and recording with new music on the way in 2021.
Find Ministry Online
Website: www.ministryband.com
Facebook: www.Facebook.com/WeAreMinistry
Twitter: www.Twitter.com/WeAreMinistry
Instagram: www.Instagram.com/WeAreMinistry