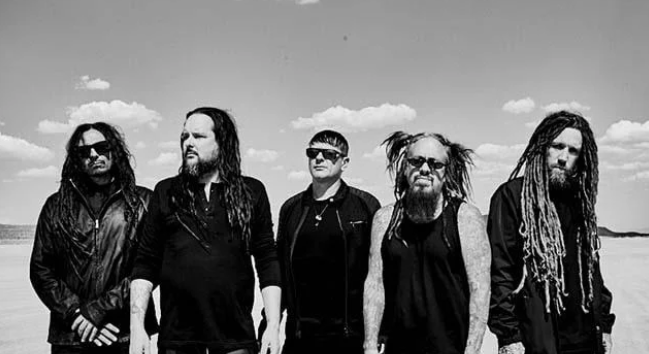 MARCH 12, 2021 – Continuing a legacy of groundbreaking achievements and radical innovation, GRAMMY® Award-winning, multi-platinum band KORN have announced details of their global streaming event, KORN: MONUMENTAL.
Scheduled for Saturday, April 24th at 1:00PM PDT / 4:00PM EDT / 9:00PM BST / 10:00PM CEST, the ticketed immersive concert experience will broadcast worldwide from the set of the breath-taking Stranger Things: The Drive-Into Experience.Produced by Danny Wimmer Presents, the performance promises to be an unforgettable set from the iconic band, highlighted by rare and sought-after deep cuts and classics from their legendary catalog. Since KORN’s latest critically acclaimed album, THE NOTHING, never received a proper tour due to the Covid-19 Pandemic, KORN: MONUMENTAL will mark the live debut of select tracks from the new record for fans around the globe.
Tickets for this landmark global streaming event are on sale at www.KornLive.com at an early bird discount through Saturday, March 27th.  Fans can also purchase bundles and V.I.P. experiences, including exclusive merchandise, limited-edition autographed posters, and a virtual meet & greet with the entire band, which will be available as a digital download. KORN: MONUMENTAL will be available to stream for 72 hours through April 27th at 11:59 PM EDT. Please note, this is a fully virtual event, there will be no in-person attendance permitted.
KORN vocalist Jonathan Davis remarked “We hope you take part in this experience with us. And though it is not the same as performing live with you here, we still want to bring you some great music and a fun show.”
Watch the official trailer for KORN: MONUMENTAL HERE.
Danny Wimmer, founder of Danny Wimmer Presents commented KORN’s global streaming event, “It’s always exciting to break new ground with a band like KORN that has been with us for so many of our biggest festival moments over the years. The scale of the vision for this global stream event is even more than we’ve come to expect out of a KORN show and will be one of the biggest livestream events from a rock band we’ve seen yet. If you’ve ever wanted to know what a massive rock concert coming to life in your living room might look like, this is it. So turn out the lights, turn up the volume and get ready to rock.”
Shocking rock music back to life like only KORN could, the band ascended to a new creative, commercial, and critical peak with their 2019 album, THE NOTHING. It marked their 14th Top 10 entry on the ‘Billboard 200’ and lifted them into rarified air giving them the fifth-most Top 10 debuts on the chart of any rock band. Lead by singles “You’ll Never Find Me,” “Can You Hear Me,” and “Cold,” REVOLVER crowned THE NOTHING “KORN’s best album in over 10 years,” while Metal Hammer affirmed the album “recaptures the genuine darkness of their earlier works” in a glowing 4.5-out-of-5 star review. “It continues KORN’s mission of probing the hidden corners and harsh realities of life within a shroud discordant darkness,” declared Noisey with The FADER adding, “KORN have never shied away from innovation… the icons have always looked forward.”  Los Angeles Timesapplauded the “…deep and potent performances from the band, evoking their ever-present rage but also feelings of loss and isolation,” while NME affirmed, “This urgent and important record will ensure the veterans don’t get lost in the shuffle.”  Once again, KORN redefine, revitalize, and reimagine the scope of rock music as perennial outliers and enduring iconoclasts.

ABOUT KORN:
The GRAMMY® Award-winning rock icons created a culture with their landmark self-titled full-length debut. Generations of fans turned the band into a household name with two GRAMMY® Awards, sales of 40 million albums worldwide, hundreds of sold out shows, and over 1 billion streams – unprecedented achievements for a band of any era.  Vocalist Jonathan Davis, guitarists James “Munky” Shaffer and Brian “Head” Welch, bassist Reginald “Fieldy” Arvizu, and drummer Ray Luzier, have continued to push the limits of the rock, alternative and metal genres, while remaining a pillar of influence for legions of fans and generations of artists around the globe.  Dubbed “the soundtrack for a generation’s arrival” by The FADER, the level of KORN’s reach transcends accolades and platinum certifications.  They are “a genuine movement in a way bands cannot be now,” attests The Ringer.  They represent a new archetype and radical innovation. Their ability to transcend genre makes barriers seem irrelevant as they endure as a raw and real force. Bringing everything full circle, the band’s 2019 album THE NOTHING remains a testament to their sustained impact. After all of these accolades, broken records, and changed lives, KORN are still and forever here to stay.
Connect with KORN:
www.KornOfficial.com
Twitter.com/Korn
Facebook.com/Korn
Instagram.com/Korn_Official