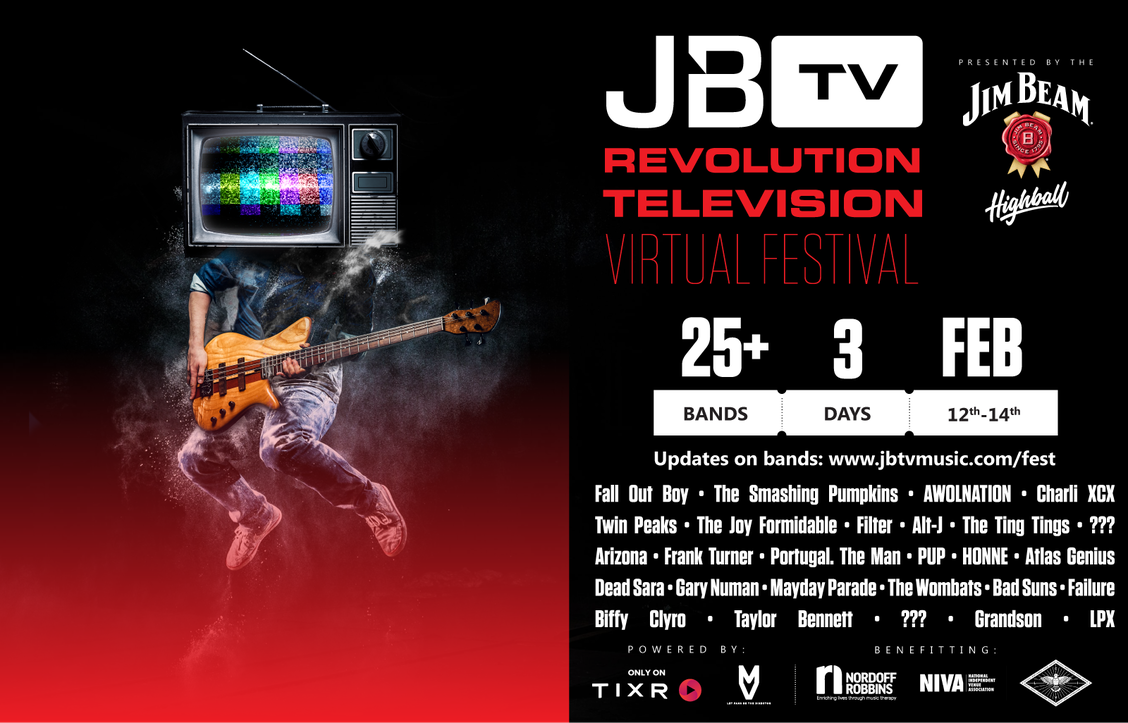 JBTV Music Television is the longest running music television program in the business. Dedicated to introducing the world to new artists, JBTV has hosted bands such as Fall Out Boy, Twenty-One Pilots, The Smashing Pumpkins, Cage The Elephant, Arctic Monkeys, Imagine Dragons, Tame Impala, and the list  goes on. These superstar names all received their very first television exposure on JBTV. As the recipient of the coveted Billboard Music Video Award, alongside multiple Emmy Awards, JBTV is your go-to hub for all things up and coming in the music world.

Fast forward to 2020 and the sudden, brutal halt of live music. This industry has never seen anything like it. But the show must go on! We believe JBTV has the power to bring live music and touring, along with your favorite artists and classic performances, back where they belong. After 30+ years of ground breaking JBTV shows, we present to you: Revolution Television Virtual Festival. Never before seen performances and content from some of the coolest bands on the planet! A three-day exclusive music  festival unlike any other. Classic shows from artists all around the world at JBTV Studios and the Metro Club in Chicago brought right to you.

This past year has been, to say the least, a disaster. Artists can’t perform. Clubs can’t open. And fans like  you are being robbed of a world they once knew. We feel your pain. JBTV has had to close our studio.  We lost our lease, just like so many other venues without bands to perform. So what are we going to do  about it? We’re going to livestream a three-day festival from February 12th to the 14th featuring never before seen footage from our legendary catalogue. And we’re going to raise funds for CIVL (Chicago Independent Venue League), NIVA (National Independent Venue Association), Nordoff Robbins, and JBTV while we do it!

Music unites the world and Jerry Bryant has that rare, extraordinary ability to bring all kinds of people,  artists, and music together from the live studios and iconic venues of Chicago. The JBTV family can now  officially merge with the UK artist base it has developed over the years from our studio in HD. First-time  performances straight to your living room. We’re bringing the best of UK and USA alternative music  scenes together with classic, timeless performances. We are all in this together as we move forward in 2021 to a day where we can go live again and bring back the music scene that created the longest running music tv show in America.