HALLOWEEN HAPPENINGS: MAU5TRAP PRESENTS: DAY OF THE DEADMAU5 AT THE DRIVE INN AT SEATGEEK STADIUM 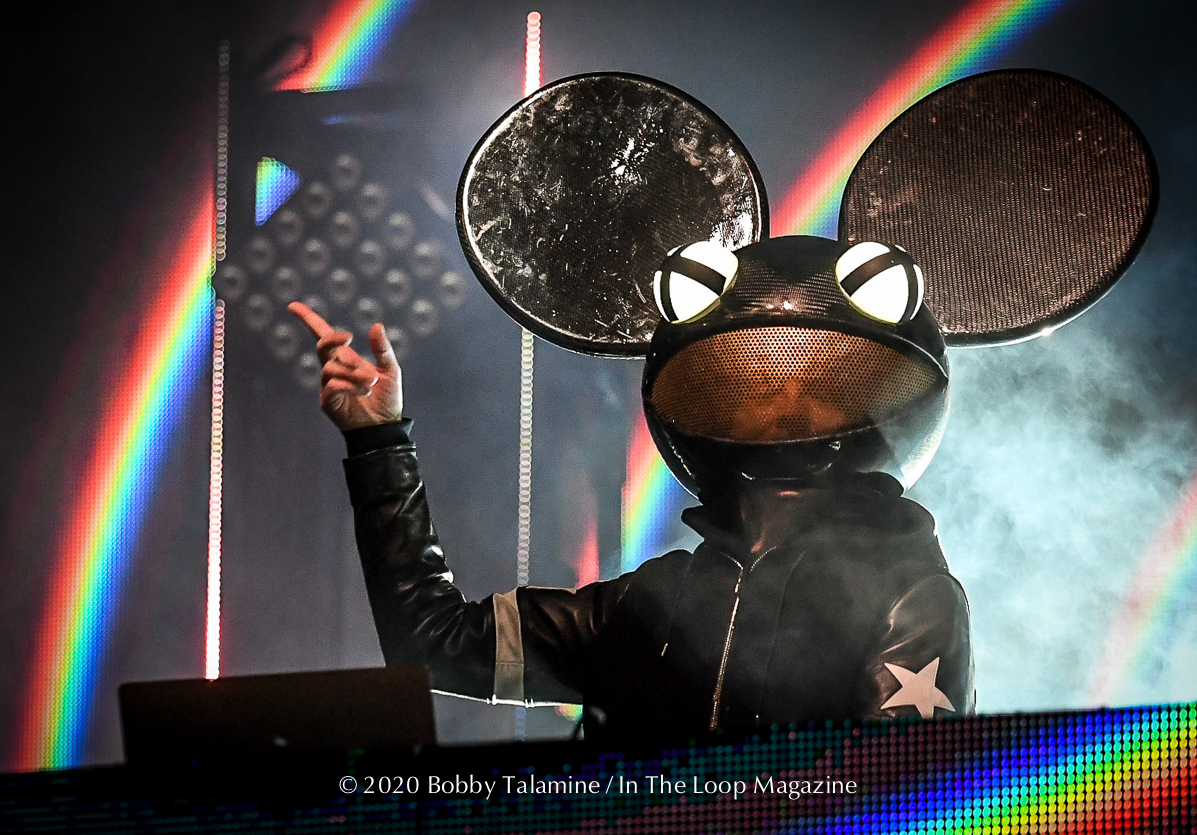 When Joel Zimmerman, aka deadmau5, announced these Halloween weekend shows a couple months ago- have to tell ya that excitement ensued. Having not shot much live anything in months, I jumped at the opportunity to capture and review these shows from Seatgeek Stadium in Bridgeview, even with the chance of inclement weather making the shows survivable for a guy like me fifty/ fifty.

So yes, arriving early when the gates opened to drive to my designated space in the parking lot, it was chilly. By nightfall, and Joel technically going on prompt at 8:55pm – yes, there’s a definite chill in the air, and temperatures hovering around 32 degrees or so, without the windchill. This is not a complaint, because it is what it is, especially for late October in the Chicagoland area. You gut it out, like your camera gear as well, getting it acclimated to the cold weather, so nothing eyepiece wise and lens wise gets all fogged up. That, and you come prepared, with layers of clothes, the right kind of mask, and skull cap.

With all the rules and regulations in place for these shows with deadmau5, and knowing full well the excited and rapturous nature of his devoted fans, let alone alone Halloween weekend, and not a mid week show- you have it in the back of your head that unruliness can definitely ensue. Have to say for the entire show, everyone was well behaved and following proper protocols. What a relief, I tell ya.

The Day of the Deadmau5 shows, overall, were splendid, even without Joel’s massive and sophisticated Cube front and center. The visuals, complimenting the music in cue and on point, were as tight as ever, amazingly sharp, and the heavy duty PA was enhancing the production, no different than Joel’s usual indoor arena spectacles of the past. The only missing ingredient- a packed main floor from front to back, pogoing and jumping up and down in place to the beats. Sort of strange looking about, and every ten feet a designated space for cars in front left to right of the stage, going back about a hundred yards or so, to the back of the gigantic parking lot. Magnify this with the ensuing chilly air, making clapping and cheering on your hero deadmau5 a difficult task indeed.

From my vantage point close to the stage, and also wandering about the parking lot from different vantage points between songs, the crowd was definitely into it, as well as they can be- and Joel looked into it as well, all smiles for most of the show. And Joel’s sophisticated Day of the Deadmau5 mouse ears, with a ridiculously awesome front grill of haunting red, mouth open, which looks like it could be a growl, or a laughable fright- is sophisticated and detailed.

Joel switches between songs between this new version of mouse ears  and his more tried and true all black version, with illuminated eyes, and also just plain Joel himself, occasionally catching his breath or lighting up a cigarette with just a simple black baseball cap. Most of his well known songs are performed tonight, from “Some Chords”, “Maths”, “My Pet Coelacanth”, and of course “Moar Ghosts n’ Stuff” into the awesome “Ghosts N Stuff”.
I’m satisfied with the choices above, and know full well that this performance, at least for a “Drive Inn” spectacle is going to leave high marks. And then the surprise, about 13 songs into the set, with fellow Canadian singer Kiesza, as she comes out to perform their new release “Bridged By a Lightwave”.
This was a highly anticipated collaboration, with a promo video that dropped about a week prior to the shows, giving you a sense of the hypnotic beats matching the powerhouse vocals from Kiesza.

And to finally hear the song in its entirety, which is due to be released on November 13th- let’s just say it can’t come at a better time. The production, Kiesza’s sexy  dance moves matched with Joel’s songwriting shoots chills down your spine. A rather charming and impromptu moment happens right towards the end of the song, with Joel coming forward to the front of the stage to try to match Kiesza’s ballerina like poses, barely even able to get one leg stretched out horizontal, let alone trying for two. No matter, it’s all in good fun, emulating the carefree style form Joel as of late, enjoying life even in the midst of a pandemic, and knowing full well that his glass is half full, not half empty. And so it goes through the rest of the evening during the show- with still more sophisticated visuals matched to the beats perfectly, and for me. with a huge smile on my face- cold weather be damned.

Day of the Deadmau5 setlist from Seatgeek Stadium:

Deadmau5 Day Of The Deadmau5 @ Seatgeek Stadium Ministry Releases New “Git Up, Get Out ‘N Vote” Video & Plans Surprises For Next 2 Tuesdays Leading Up To Election Day