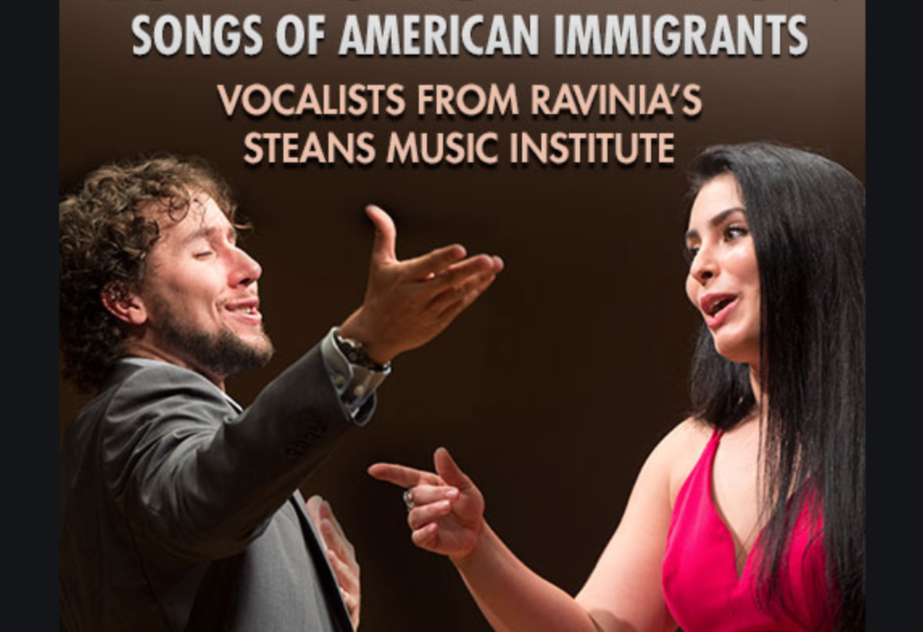 HIGHLAND PARK, IL –  Generations of immigrants have made their indelible mark on this nation, and Ravinia Festival will honor that history this January with “Coming to America: Songs of American Immigrants,” performed by the Singers from Steans—a select group of alumni from Ravinia’s Steans Music Institute (RSMI), the festival’s prestigious summer music program. The evening of song will feature soprano Christine Lyons, mezzo-soprano Siena Licht Miller, tenor John Matthew Myers, and bass-baritone Nicholas Newton, all of whom attended RSMI’s Program for Singers during the summer of 2019. At the piano will be Kevin Murphy, who has led the RSMI vocal program since 2012. Featured composers include Kurt Weill, Paul Hindemith, and Alexander Zemlinsky.

“Coming to America: Songs of American Immigrants” will be heard on Saturday, January 25, at 8:00 p.m. in Ravinia’s intimate Bennett Gordon Hall—tickets are available through Ravinia’s box office and online at Ravinia.org. The Singers from Steans will then take the program to Arizona, performing at the Fred A. Fox School of Music at 7:30 p.m. on Monday, January 27, as part of the Tucson Desert Song Festival. For more information about the Tucson Desert Song Festival, visit tucsondesertsongfestival.org.

Christine Lyons: Soprano Christine Lyons has been praised as “especially moving” by the Pittsburgh Post-Gazette, called a “revelation” by Gay City News, and hailed a “true virtuosa” by Broadway World. This season, she sings the title role in Norma with Winter Opera Saint Louis, joins the Kennedy Center for “The Me I Want to Sing” with selections from Il trovatore and Tosca, sings Mozart’s Exsultate, jubilate with the Queens Symphony Orchestra and with the Spectrum Symphony of NY, and is presented in recital with Thomas Muraco by the Art Song Preservation Society of New York. In the summer, she sings the title role of Bellini’s La straniera with Teatro Nuovo at Lincoln Center. Recent roles include Amenaide, Fiordiligi, Donna Anna, Micaëla, Adina and Giulietta. Lyons earned a Master of Music from the Peabody Institute, a Bachelor of Fine Arts from Carnegie Mellon University, and completed further studies at the Mozarteum in Salzburg.

Siena Licht Miller: German American mezzo-soprano Siena Licht Miller is quickly making a name for herself both in the opera and concert worlds. As an Emerging Artist with Opera Philadelphia, Miller made her professional debut as Second Lady in The Magic Flute and returned this season in two recitals as a part of its O18 Festival. Most recently with the company, her performance as Hermia in A Midsummer Night’s Dream garnered critical acclaim. Highlights for the 2018⁄19 season included the title role in Dido and Aeneas, Dinah in Trouble in Tahiti, Beethoven’s Ninth Symphony with the Oregon Symphony, and a recital on the Carnegie Hall Citywide Concert Series. Miller is an alumna of the Curtis Institute of Music, the Oberlin Conservatory of Music, Gerdine Young Artist Program at Opera Theatre of Saint Louis, the Chautauqua Institute, and the Aspen Music Festival. In September 2019, she will co-star in a world premiere by Philip Venables, Denis and Katya, at Opera Philadelphia.

John Matthew Myers: Tenor John Matthew Myers, declared an “artist to watch” by Opera News, has rapidly established himself among the ranks of today’s exceptional young voices. He has collaborated with such companies as the Verbier Festival, Santa Fe Opera, and Los Angeles Opera, and he made his surprise Los Angeles Philharmonic debut in 2017 as Mao in John Adams’s Nixon in China, conducted by the composer. His breakout performance was hailed by the Los Angeles Times as “brightly lighted to match his declaiming voice.” Concert highlights of the 2018/19 season included Mahler’s Das Lied von der Erde with the Colorado Springs Philharmonic and conductor Josep Caballé-Domenech; a new production of John Cage’s Europeras 1 & 2 with the Los Angeles Philharmonic under the direction of Yuval Sharon; Mozart’s C-minor Mass with the Grand Rapids Symphony Orchestra and Marcelo Lehninger; and Beethoven’s Ninth Symphony with the Annapolis Symphony Orchestra and José-Luis Novo.

Nicholas Newton: A San Diego native, Nicholas Newton is garnering due attention as an up-and-coming bass-baritone in the opera world. Growing up in a musical household, Newton has pursued his passion for singing through gospel, jazz, musical theater, and now classical music. Notable operatic roles include Monterone in Rigoletto with Opera Theatre of Saint Louis, Olin Blitch in Susannah and Achilla in Giulio Cesare at Rice University, and Un Arbre/La Fauteuil in L’enfant et les sortilèges at Aspen Music Festival. Notable concert performances include solos in Mozart’s and Fauré’s Requiems, Haydn’s “Lord Nelson” Mass, Stephen Paulus’s To Be Certain of the Dawn, Gershwin’s Catfish Row with San Diego Winds, and Duruflé’s Requiem with San Diego Master Chorale. Newton recently completed his last year in the master’s degree program at Rice University and he joined the Houston Grand Opera Studio in the fall for the 2019/20 season.

Kevin Murphy: Pianist and RSMI Singers Program Director Kevin Murphy serves on the faculty of the Jacobs School of Music at Indiana University. Prior to returning to his alma mater, he was director of music administration at New York City Opera and served as the director of musical studies at the Paris Opera. In 1992, he was the first pianist to participate in the Metropolitan Opera’s Lindemann Young Artist Development Program. He has played continuo harpsichord with the Metropolitan Opera Orchestra in several productions, as well as traveled with the company on tour in Japan. In addition to his on- and off-stage partnership with his wife, soprano Heidi Grant Murphy, he has collaborated in concert and recital with many of today’s leading artists. A native of Syracuse, NY, Murphy received his bachelor’s degree in piano performance from Indiana University and master’s in piano accompaniment from the Curtis Institute of Music.